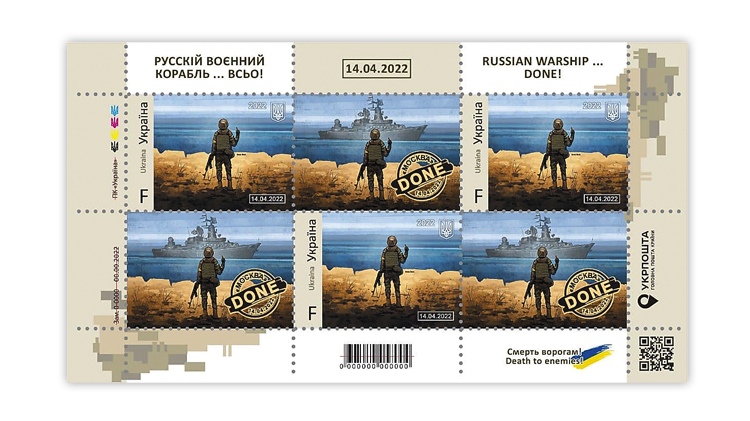 Ukraine celebrates the sinking of the Russian warship on stamps being issued May 23 in panes of three stamps and three labels. The labels show the design of Ukraine’s April 12 “Russian warship go f--- yourself” stamps. The new stamps are based on the same

Ukraine’s post office, Ukrposhta, has issued two stamps commemorating the sinking of the Russian warship Moskva. The stamps were issued in Ukraine on May 23, with long lines forming at some post offices to buy them. They are expected to go on sale online on May 24.

One of the two warships that launched an attack on Snake Island on Feb. 24, Moskva was sunk April 14, two days after Ukrposhta issued stamps illustrating the defiant “Russian warship go f--- yourself” response of the Ukrainian defenders of the island.

As reported by Jay Bigalke in the Philatelic Foreword column in the May 30 issue of Linn’s, the new stamps continue that theme and feature a modified version of Boris Groh’s artwork for the set of two issued April 12.

Groh’s original design shows a soldier on Snake Island flipping off a Russian warship. For the design of the new stamps, the ship has been removed. Also the date of the sinking was added in a tablet on the lower right of the new design.

The two new stamps are being sold in panes of three stamps with three labels that show Groh’s original design with the word “DONE,” the ship’s name and the date of sinking added.

The message “Russian Warship ... DONE!” is repeated in English and Ukrainian in the selvage. Also included in the margin is the date of the sinking and an additional message.

According to the new-issue announcement, the additional message is “Death to enemies” in English and Ukrainian on the nondenominated “F” stamp that pays the domestic rate for registered letters up to 50 grams.

Also, according to that announcement, the message is “Glory to the Nation” on the “W” stamp for international surface-mail letters weighing up to 50 grams.

The stamps were printed by offset in Ukraine. Two first-day covers, one for each stamp, also were produced. The first-day cancel shows Moskva sinking.

Ukrposhta’s general director Igor Smelyansky said in a May 19 Facebook post that the quantity of the new stamps would be 5 million, so presumably 2 million “W” stamps were printed.

Ukrposhta’s online webshop has been closed since mid-May after a cyber attack.

Smelyansky said that for the May 23 issue “1.5 million stamps will be sold on 5 online platforms, including international ones, so expect some pleasant surprises. The limit is the same [as at post offices in Ukraine]: 2 blocks per order.”

He added, “On most online platforms, there will be a possibility of charitable donations to support the army and those who have suffered from war.”

This story was updated May 23.