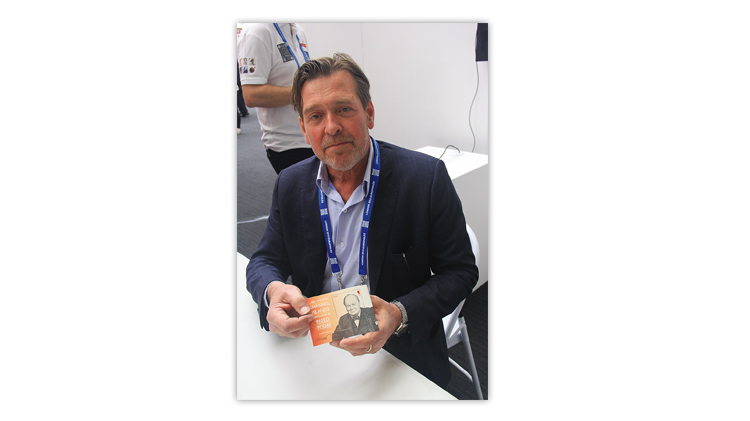 As teased in the March monthly issue of Linn’s, this issue highlights an article about master engraver Martin Mörck. The article was planned to coordinate with his visit to the Rocky Mountain Stamp Show in Denver, but like many stamp shows and gatherings, it was canceled because of the coronavirus COVID-19 pandemic.

Even so we pressed forward with the article, and perhaps sometime in the future Mörck will be able to visit the United States again and attend a stamp show.

The article and the subject of stamp engraving sent me on a bit of a reminiscing course. I consider myself quite fortunate to have met some of the big names in stamp engraving over the last 20 years.

The first was Polish engraver Czeslaw Slania (1921-2005), who has more than 1,000 stamp designs to his credit. Slania came to the United States for World Stamp Expo 2000 held in July that year in Anaheim, Calif. He was at the Sennett Security Products printer booth, and I remember getting a few things autographed by him there.

In 2005 the United States and Sweden participated in a joint stamp issue honoring Greta Garbo. I traveled to Sweden for the ceremony, and I set up an interview with Polish engraver Piotr Naszarkowski, who engraved the design for the joint-issue stamps. We sat in the library space at the postal museum in Stockholm and discussed Slania, engraving and upcoming projects.

On that same trip, I met Swedish engraver Lars Sjööblom, who engraved the design for the second Garbo stamp that only Sweden issued. The day after the Garbo ceremony, he demonstrated the art of engraving at a Sweden Post event.

I met with Naszarkowski again when he visited the United States for the 2006 international stamp show in Washington, D.C. And I was able to chat with Sjööblom again last year at the Stockholmia 2019 stamp show.

I also briefly met Mörck at a 2015 stamp show in London. He signed a couple of items for me, one of which was the 2015 Winston Churchill souvenir sheet he engraved for Jersey.

Lastly I have fond memories of meeting and interviewing the creative father-son team of Jorge and Rodrigo Peral. Both of those meetings took place at Canadian Bank Note Co. in Ottawa, Ontario. They have a number of Canadian stamps to their credit, with the most recent being the 2018 $4 Rocky Mountain Bighorn Sheep stamp.

These meetings have added a personal connection to the stamps in my collection. If in the future you have an opportunity to meet a stamp engraver, don’t let it pass.

The Scott Graded U.S. Stamp Report that normally appears in the May issue will return in the June Linn’s instead.