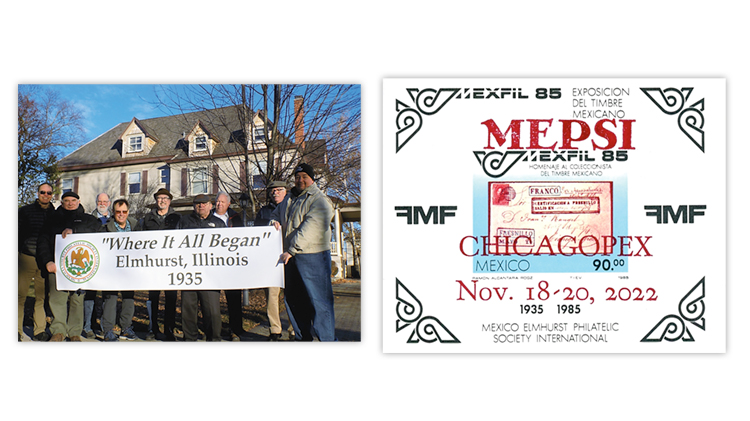 Members of the Mexico-Elmhurst Philatelic Society, International celebrate the founding of the club in 1935 at the Elmhurst, Ill., home where it first met. The club also overprinted a Mexico souvenir sheet for the anniversary.

Stamp clubs celebrate anniversaries on a regular basis, sometimes not even at intervals of five, and at Linn’s we hear about a lot of the festivities. While we might not report on each one we hear about, some stand out.

One such anniversary was celebrated in November 2022 by the Mexico-Elmhurst Philatelic Society, International and brought to my attention by Marc E. Gonzales.

Gonzales shared a photo of a pilgrimage that members took to founder Byron Stevens’ home in Elmhurst, Ill., where the society held its first meeting in 1935. At the time, its name was just the Elmhurst Philatelic Society. The Mexico focus came in 1942 when the club decided to look for a country that would give members a common collecting interest.

Fast forward to 2022, when the club created the banner shown in the photo nearby for the picture-perfect moment to mark another year of the society.

The photo op coincided with the society meeting at the Chicagopex 2022 stamp show held Nov. 18-20.

For additional information on the society, visit its website or email Eric Stovner at treasurer@mepsi.org.