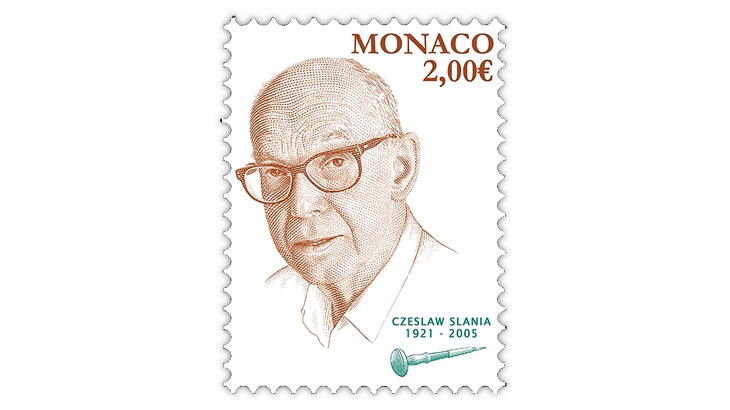 Monaco will mark the 100th birth anniversary of stamp engraver Czeslaw Slania on a €2 stamp to be issued June 17.

Considered the most prolific stamp engraver in the world, Slania (1921-2005) engraved more than 1,000 stamps for more than 30 postal services, including numerous issues for Monaco.

In announcing the new stamp, Monaco’s Office of Timbres (Stamps) said of Slania, “A meticulous worker whose creations are unmatched, he produced his dies in just a few days with enormous attention to detail.”

The upcoming Slania commemorative was designed and engraved by another prolific stamp engraver, Martin Morck.

The preliminary image of the stamp shows a portrait of Slania in the center with a burin (a tool used by engravers) in the lower right. Above the burin are Slania’s name and the years of his birth and death.

France’s Philaposte printed the stamp by three-color intaglio. It will be sold in panes of six.

A handful of other postal administrations have also included Slania commemoratives on their stamp programs for 2021.

Sweden will pay tribute to Slania on a stamp to be issued Oct. 22, the 100th anniversary of his birth near Katowice, Poland. Slania moved to Sweden in 1956, eventually engraving more than 450 Swedish stamps and serving as its royal court engraver.

Denmark, Faroes and Greenland have arranged a three-nation Slania joint issue. Each postal administration is scheduled to issue a souvenir sheet Aug. 12. The stamps, which will picture Slania at work, will be engraved by Morck. The design is based on a photograph by Wayne Chen.

Slania’s native country, Poland, also will honor his 100th birth anniversary, but details about this stamp have not been released.

For information about Monaco’s Slania stamp visit the Office of Timbres website.

Further information about their Slania stamps will be available closer to the issue dates.