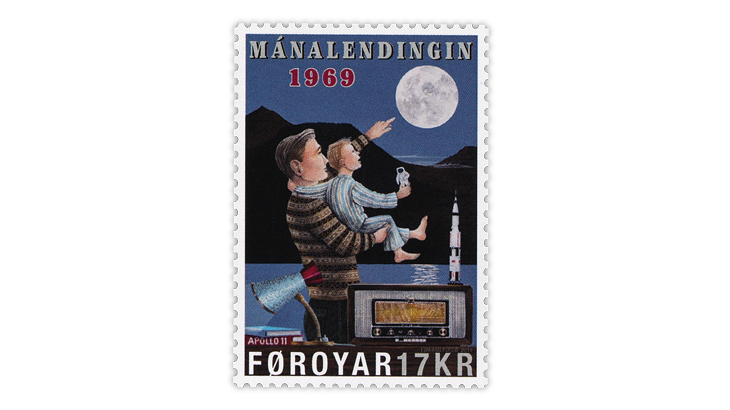 The Faroe Islands is scheduled to issue a stamp April 29 to honor the 50th anniversary of the first manned moon landing stamp. A preliminary stamp design is shown here.

The big headline for the week is that the United States Postal Service finally revealed its stamp issue for the 50th anniversary of the 1969 manned moon landing.

Also this week, I received in the mail Posta Stamps, the bulletin of new issues of the Faroe Islands, and one stamp jumped out. This 17-kroner stamp commemorating the 1969 manned moon landing anniversary will be issued April 29. But why is the Faroe Islands honoring this event?

The bulletin described the connection: “Far away from Houston and far below the Moon, in the town of Klaksvík in the Northern Isles, it was bedtime for four-year-old Edward Fuglo. He had noticed the growing excitement of the adults and heard the radio reports throughout the day and evening.

“Although he did not fully understand what all the fuss preoccupying the grown-ups was about, he knew something big was happening. Suddenly it seemed that the excitement abated and his father, Jens, took the little one in his arms, walked over to a window and pointed up to the sky telling him about the men who at that very moment had landed on the Moon.

“This became one of artist Edward Fuglos’s first childhood memories — and 50 years after the event took place, he has illustrated that magic moment on Posta’s Anniversary stamp featuring Apollo 11’s historic journey to the Moon and Armstrong’s and Aldrin’s visit to this faithful companion of planet Earth.”

What a great story and connection to a moment in time. I’m certain the Faroe Islands won’t be the only postal administration commemorating the 50th anniversary, and it will be interesting to see what others come up with for their stamp issues.

For more information on this stamp and others of the Faroe Islands, visit online at https://en.stamps.fo or write to Posta Stamps, Odinshaedd 2, FO-100 Torshavn, Faroe Islands.