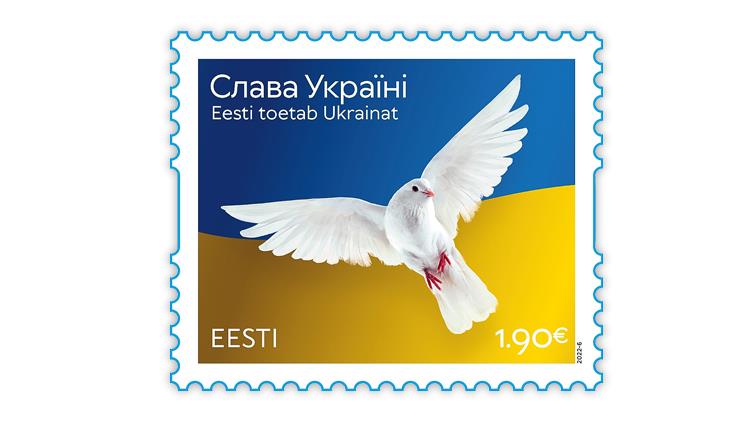 Estonia issued an international-rate stamp March 24 to show support for Ukraine’s independence and for ending the war in that country. 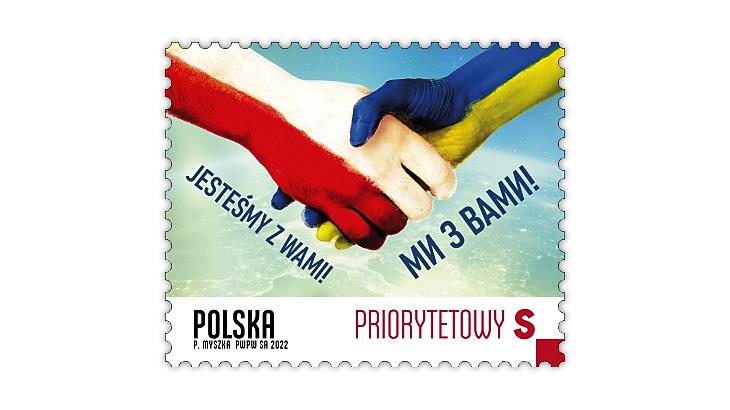 Poland expressed solidarity with Ukraine on a stamp issued March 25. The inscriptions in Polish and Ukrainian translate to “We are with you.” 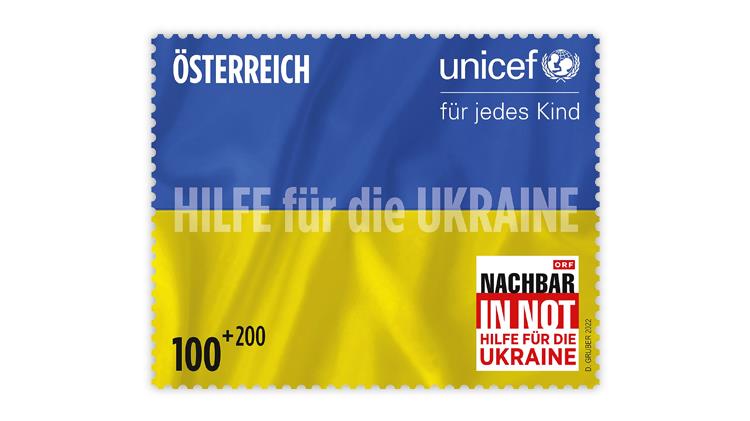 Austrian Post partnered with UNICEF and an Austrian foundation, Nachbar in Not (Neighbor in Need), for its March 31 semipostal stamp to help the people of Ukraine.
Previous
Next

Other European countries have joined Latvia in issuing stamps to demonstrate their support for Ukraine after the Russian invasion on Feb. 24.

As reported in the April 4 issue of Linn’s, Latvia’s postal administration, Latvijas Pasts, issued a €1.44 stamp March 10 in a souvenir sheet of three stamps and a label, with 50 percent of the proceeds going to the Ukrainian charity organization Ziedot.lv.

Since then, Estonia, Poland and Austria released stamps showing their solidarity with Ukraine. Also, Croatia is scheduled to issue a stamp April 12, and Lithuania announced a design contest for a stamp to be issued in May.

Estonia’s post and logistics company Omniva issued a Glory to Ukraine stamp March 24, a month after the invasion.

The €1.90 international-rate stamp shows a peace dove against the blue and yellow colors of Ukraine’s flag.

In the March 7 press release announcing the stamp, Mart Magi, chairman of the board of Omniva, said that postal customers “can choose the Ukrainian postage stamp to express their support and spread the message of peace around the world.”

The advertising agency Utopia designed the stamp. Vaba Maa printed it in a quantity of 50,000.

Poland’s stamp issued March 25 displays the message “We are with you” in Polish and Ukrainian. That message also is illustrated by the stamp’s central design showing a handshake, with one arm painted in the white and red colors of Poland’s flag and the other in the blue and yellow of Ukraine’s flag.

The stamp is nondenominated, inscribed in Polish with the equivalent of “Priority S.” Poland’s post office, Poczta Polska, reports that its current face value is 4.90 zlotych.

Pawel Myszka designed the stamp. The Polish Security Printing Works printed it in an initial quantity of 3 million.

The stamp was unveiled on its issue date at the headquarters of the Ministry of Foreign Affairs Republic of Poland.

In the press release about the ceremony, the ministry thanked Polish Security Printing Works for printing the stamp at “breakneck speed” to allow it to be put into circulation so quickly.

The March 16 press release announcing the stamp called it “an act of solidarity,” adding that the stamp “is meant to provide affected persons with what they need; the range and extent of help needed varies greatly. Therefore, half of the 2-euro premium of this stamp, which has a 1-euro face value, will go to two experienced relief organisations, respectively: the Austrian organisation ‘Nachbar in Not’ [Neighbor in Need] and the international organisation UNICEF. Both are partners for the issue of this commemorative stamp.”

To read the rest of this story about new stamps issued in support of Ukraine, subscribe to Linn’s Stamp News.