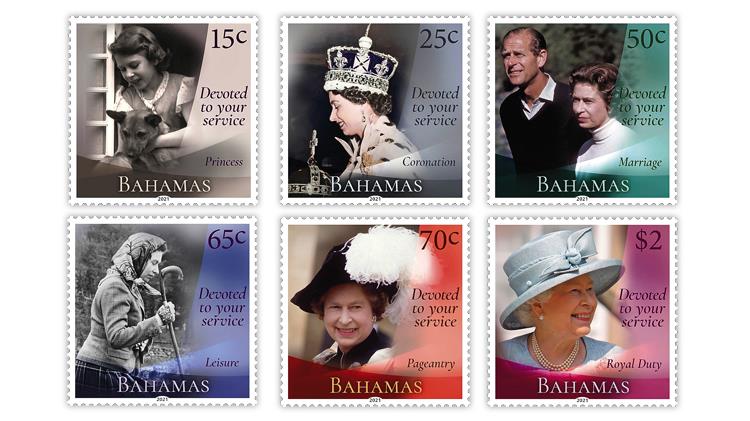 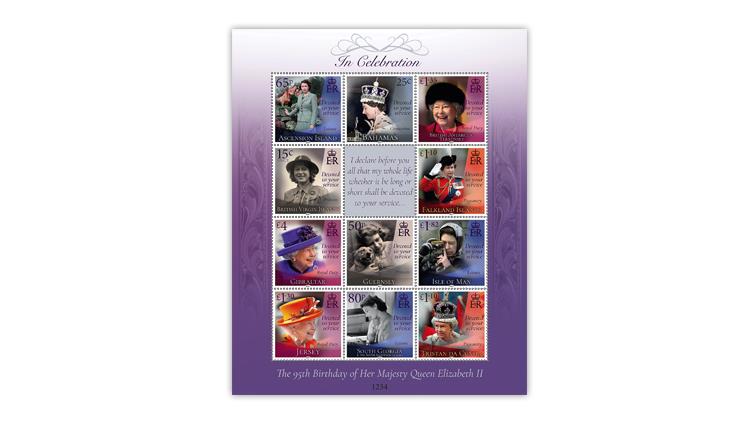 Jersey Post is also issuing what it calls a “joint sheetlet,” which contains one stamp from each participating postal administration. The stamp from South Georgia and the South Sandwich Islands (in the center of the bottom row) shows Princess Elizabeth lo
Previous
Next

Eleven postal administrations are joining together to celebrate the 95th birthday of Queen Elizabeth II in a stamp series called Devoted to Your Service. Most, but not all, of the stamps will be issued on her birthday, April 21.

The official website of the British royal family said: “The Queen was born at 2.40am on 21 April 1926 at 17 Bruton Street in Mayfair, London. She was the first child of The Duke and Duchess of York — who later became King George VI — and Queen Elizabeth. She was christened Elizabeth Alexandra Mary at Buckingham Palace on 29 May that year.”

The stamp series’ name comes from the queen’s April 21, 1947, 21st birthday speech in which she said, “I declare before you all that my whole life whether it be long or short shall be devoted to your service and the service of our great imperial family to which we all belong.”

The Bahamas is an independent country within the Commonwealth; Guernsey, Jersey and the Isle of Man are Crown dependencies; and the others are British overseas territories.

Each postal administration is contributing six stamps to the series representing the following key aspects of Elizabeth’s life: as a young princess, the coronation, marriage, leisure activities, pageantry and royal duty. The six stamps to be issued April 21 by the Bahamas are shown nearby.

Bee Design designed these stamps, using photographs from various sources. Printed by lithography by Cartor Security Printing in Meauce, France, the stamps will be sold in panes of 10, according to information Pobjoy Mint, the new-issue agent for the Bahamas.

In addition, Cartor printed the stamps for Gibraltar, the Isle of Man and Jersey by lithography in panes of 10. The issue dates are Feb. 9, Feb. 26 and April 21, respectively.

Guernsey has announced that its stamps will be issued April 21 in panes of 10, but has not yet reported other printing details.

However, in the brief announcement of the stamps as part of its 2021 stamp program, Guernsey’s philatelic bureau (Guernsey Stamps and Collectables) did mention a “joint sheetlet.”

The Isle of Man and Jersey have already provided details of their joint sheetlets, and the image supplied by Jersey Post is shown nearby.

The sheet contains 11 stamps, one from each postal administration. Among these is the only stamp in the series that shows Elizabeth looking at her stamp collection, the 80-penny Leisure stamp from South Georgia and the South Sandwich Islands. According to Pobjoy Mint, the photograph was taken in July 1946 at Buckingham Palace.

The British Virgin Islands also will issue a souvenir sheet with a single $5 stamp showing a photograph of the queen taken July 17, 2020, during a special ceremony to confer knighthood on Capt. Thomas Moore (1920-2021). The sheet does not depict Moore, the World War II veteran who at age 99 raised more than £32 million for charity by taking laps in his garden during the COVID-19 lockdown.

Websites to visit for more information include Pobjoy Mint and the philatelic bureaus of Gibraltar, Guernsey, the Isle of Man and Jersey.