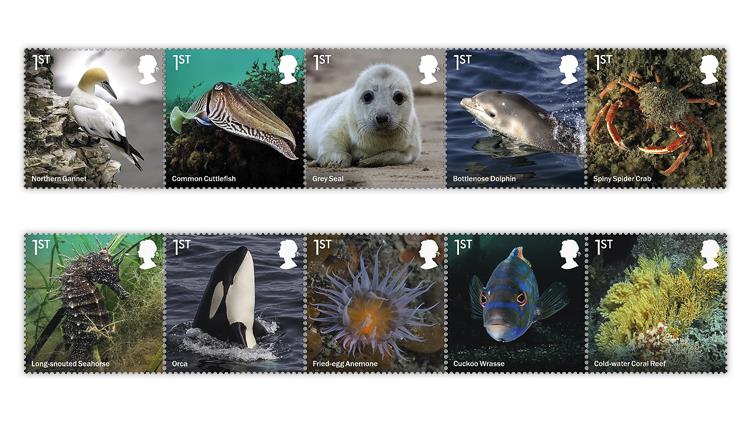 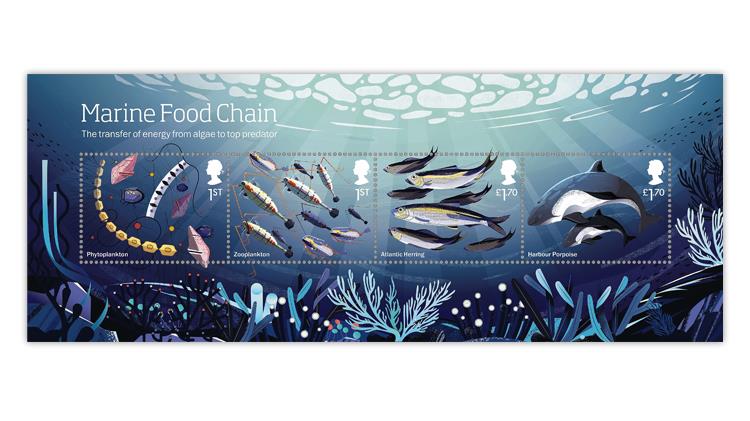 The souvenir sheet in Great Britain’s Wild Coasts set illustrates the four levels of the marine food chain from phytoplankton at the bottom to top predators, such as the harbor porpoise.
Previous
Next

Royal Mail’s new Wild Coasts set of 14 stamps features wildlife found in and alongside the coastal waters of the United Kingdom.

Royal Mail worked with marine biologist David Sims on the Wild Coasts issue. He said, “The stamps are a great opportunity to celebrate the UK’s wonderfully diverse marine life but also to acknowledge our responsibility to protect these increasingly impacted species and ecosystems.”

Royal Mail said of its coastal areas and the more than 3,000 species of animals and seaweed found there: “The UK is fringed by a patchwork of unique and beautiful marine habitats — from wild, Atlantic shorelines, to placid lochs and lagoons, sheltered by complex coastal geological features. These places support an incredible diversity of wildlife, each species interacting in complex and often fascinating ways.”

The 10 stamps are presented in two strips of five with the designs se-tenant (side-by-side).

Each stamp is nondenominated, paying the first-class rate (currently 85 pence).

A common cuttlefish (Sepia officinalis) is pictured next. The Wildlife Trusts charity described cuttlefish as a “chunky squid-like creature with a well-developed head, large eyes and mouths with beak-like jaws. They have a fin that runs around their body, eight ‘arms’ with suckers plus two tentacles around the mouth.”

The strip continues with two stamps showing mammals, a gray seal (Halichoerus grypus) and a bottlenose dolphin (Tursiops truncatus), respectively. According to Royal Mail, almost half of the world’s gray seals live in the United Kingdom’s waters.

A spiny spider crab (Maja brachydactyla) is featured on the last stamp in this strip. According to the Wildlife Trusts, this large orange crab with “long, spindly legs like a spider” has “an oval, spiky shell that is often covered in algae.”

An orca (Orcinus orca) is shown on the second stamp in the strip. Also known as a killer whale, it is the largest member of the dolphin family. SeaWorld states that the largest reported male orca was 32 feet long, weighing about 22,000 pounds. The largest recorded female was 28 feet and 16,500 pounds.

The center stamp showcases the fried-egg anemone (Actinothoe sphyrodeta). Royal Mail describes it as “a small, delicate anemone, white in colour, with white stripes and fine stinging tentacles used to catch prey,” adding that the orange oral disc (the fried egg) is not found in all individuals. In fact, a white oral disc is more common.

One of Britain’s most colorful fish, the cuckoo wrasse (Labrus mixtus), appears on the fourth stamp. The Scottish charity Community of Arran Seabed Trust, or COAST says, “The name cuckoo wrasse was coined by Cornish fishermen who compared the blue coloured males with bluebell flowers, which in Cornish translates as the ‘Cuckoo flower.’”

A photograph of a cold-water coral reef is shown on the last stamp in the strip. Royal Mail said, “Usually associated with warm tropical waters, corals are also found around Britain. Some UK species can form dense reefs in deeper, northern waters.”