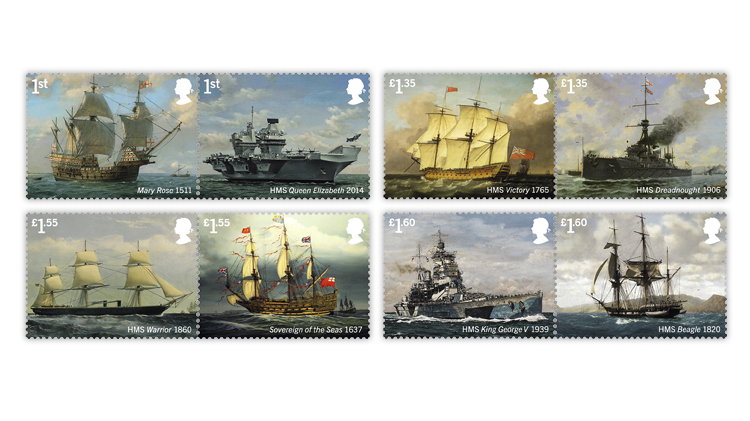 On Sept. 19 Royal Mail issued eight stamps illustrating paintings of famous ships of the Royal Navy. The ships span more than 500 years of Great Britain’s oldest military service. Among the ships commemorated is HMS Victory, which participated in the 1805

The stamps, each showing a painting of a Royal Navy vessel, were issued in four se-tenant (side-by-side) pairs. The name of the ship and the year it was launched appear at the bottom right on each stamp.

In its announcement for the Royal Navy Ships stamps, Royal Mail said: “The oldest of Britain’s armed forces, the Navy is known as the ‘senior service.’ As an island nation, Britain’s prowess in ship design innovation and navigation has been instrumental in its history.

“Royal Mail is paying tribute to the Royal Navy by featuring eight ships from its illustrious history including the Mary Rose launched in 1511 and the most recently commissioned ship, HMS Queen Elizabeth, which was launched in 2014.”

During his 1509-47 reign, King Henry VIII pursued shipbuilding with a passion, and he regarded the Mary Rose as his favorite.

For 33 years the Mary Rose supported Henry’s maritime ambitions. The ship participated in wars against France, Scotland and Brittany before undergoing an extensive rebuild in 1536.

On July 19, 1545, while leading an attack on an invading fleet from France, Mary Rose sank just to the north of the Isle of Wight.

Although the wreckage was discovered in 1971, the Mary Rose wouldn’t be raised until 1982, via a salvage operation supported by the Mary Rose Trust.

HMS Queen Elizabeth is the first in a class of modern aircraft carriers built for the Royal Navy. It was launched in 2014 and commissioned for active service in 2017.

The ship is named for the Queen Elizabeth, a British super-dreadnought that saw service during World War I.

Unlike United States aircraft carriers, HMS Queen Elizabeth has no catapults or arresting wires on its main deck. This is because the ship is designed to carry aircraft that are capable of vertical and/or short takeoff and landing.

HMS Queen Elizabeth is currently on deployment in the western Atlantic Ocean.

HMS Victory and HMS Dreadnought take center stage on the pair of £1.35 stamps.

Best known for participating in the 1805 Battle of Trafalgar, HMS Victory was launched 40 years earlier from the Royal Dockyard in Chatham, Kent, on May 7, 1765.

During decades of service at sea, Victory saw action in both the American and French wars of independence, as well as the Napoleonic War.

Beginning in the mid-1820s, Victory was pressed into harbor service. In this role, the ship functioned as a residence and flagship.

In 1922 Victory entered dry dock permanently in Portsmouth, England, for preservation as a museum ship. Today it holds the distinction of being the oldest commissioned naval vessel in the world.

When it was launched in 1906, HMS Dreadnought began a revolution in the projection of power at sea.

The first battleship to use steam turbines for propulsion, Dreadnought was the fastest ship of its type when construction was completed.

Despite possessing substantial firepower, Dreadnought saw no action during the major WWI naval engagements. The ship is credited, however, with the ramming and sinking of U-29, a German submarine, on March 18, 1915.

HMS Dreadnought was decommissioned in 1919. The ship was sold for scrap in 1921.

Launched in 1860, the 40-gun ironclad HMS Warrior was a direct response to France’s 1859 launch of its first ironclad, Gloire.

Warrior spent its active years with the Channel Squadron and was placed in reserve status in 1875.

Following decommissioning in 1883, the ship served in a variety of roles before being donated in 1979 to the Maritime Trust, which undertook an eight-year restoration. Like HMS Victory, HMS Warrior is now a museum ship in Portsmouth.

Ordered on the directions of Charles I in 1634, Sovereign of the Seas was launched Oct. 13, 1637, from the Woolwich Dockyard in Kent. It carried an impressive armament of 102 bronze guns.

On Jan. 27, 1697, Sovereign of the Seas met an unfortunate demise when a fire burned the ship to the waterline in Chatham.

HMS King George V, launched in 1939, was the lead ship in a class of five British battleships that were commissioned during World War II.

The ship’s most noteworthy achievement came when it participated in operations that led to the May 27, 1941, sinking of Germany’s storied battleship Bismarck.

In 1945, King George V saw service in the Pacific with Task Force 57 of the United States Navy. The ship’s final combat engagement was a bombardment of Hamamatsu, Japan, July 29-30, 1945.

HMS Beagle, launched in 1820, was a Royal Navy brig-sloop that carried 10 guns. The ship was one of more than 100 Cherokee-class brig sloops to be constructed.

Despite its status as a vessel of war, Beagle is famous for its second survey voyage of 1831-36. Among the passengers was naturalist Charles Darwin, who kept a detailed diary of his experiences.

Darwin reworked his diary into a book titled Journal and Remarks, published in 1839. His book focused on his research in ethnology, geology and natural history during the voyage.

Today the book is known by its more familiar title, The Voyage of the Beagle.

The firm Hat-trick Design designed the stamps, and International Security Printers printed them by lithography in sheets of 60 (sold in panes of 30 at most postal outlets). The stamps measure 37 millimeters by 35mm and are perforated gauge 14 by 14.5.

Royal Mail also is offering several other products, including first-day covers, eight postcards reproducing enlarged images of the stamps, and a presentation pack. The pack includes the eight stamps plus information about the Royal Navy, descriptions of the ships and a Ministry of Defence security hologram.