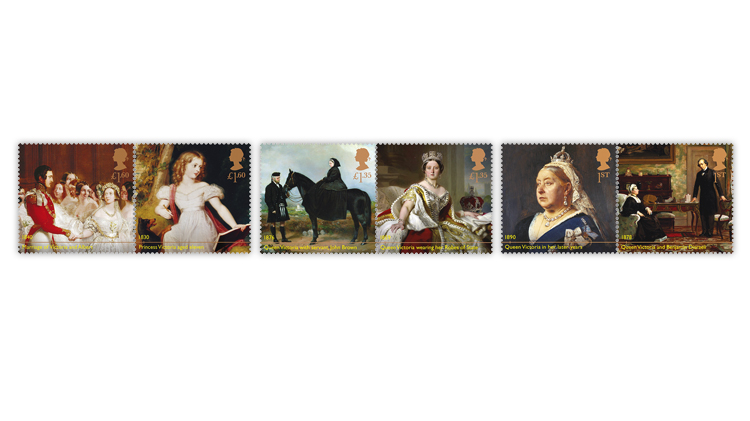 Great Britain’s Royal Mail issued stamps May 24 for the birth bicentennial of Queen Victoria. Six of the stamps in the set picture Victoria over the course of 60 years, from 1830 to 1890. The stamps are in three se-tenant pairs. 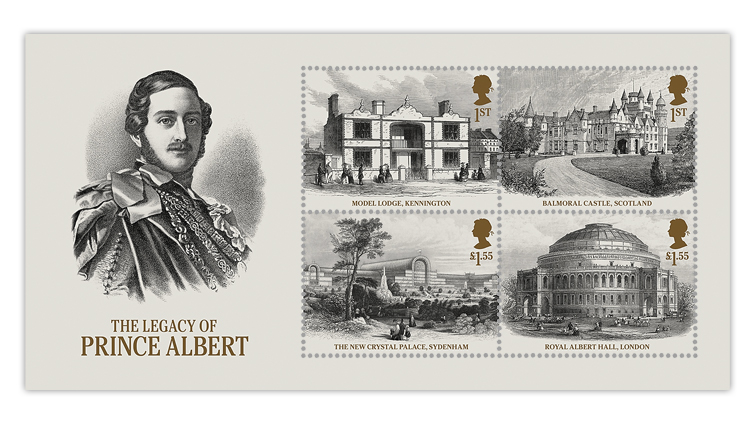 In conjunction with the 200th anniversary of the birth of Prince Albert, a souvenir sheet from Royal Mail commemorates his legacy.
Previous
Next

On May 24, Great Britain’s Royal Mail celebrated the 200th anniversary of the birth of Queen Victoria by issuing a set of stamps called Queen Victoria Bicentenary.

In announcing the stamps, Royal Mail said: “We mark two significant bicentenaries in 2019 — the birth of both Queen Victoria and of her husband Prince Albert. Queen Victoria’s reign was the second longest in British royal history and the era named after her saw dramatic social, political and economic change. We mark this anniversary with stamps that chart the life of Victoria from Princess to Empress, and the accompanying miniature [souvenir] sheet stamps celebrate the legacy of Prince Albert.”

The six stamps that “chart the life of Victoria” are in three se-tenant (side-by-side) pairs. The Prince Albert souvenir sheet includes four stamps depicting buildings with a connection to the prince consort.

A prestige booklet called “Victoria: A Long and Glorious Reign” contains 10 stamps, as well as images and text.

The stamps with the highest denomination, £1.60, picture the earliest images of Victoria included in this set.

The stamp on the right of the £1.60 pair shows her as a young princess, age 11. In this 1830 painting by Richard Westall, an artist and the princess’ drawing master, Victoria is sketching with her pet terrier Fanny beside her.

Victoria was 18 when she ascended to the throne on June 20, 1837, upon the death of her uncle King William IV. The coronation was held a year later. Her wedding on Feb. 10, 1840, is featured on the other £1.60 stamp, which depicts a detail from George Hayter’s painting of the ceremony.

The stamp is inscribed at the bottom “Marriage of Victoria and Albert.” Also like all six stamps in se-tenant pairs, it includes a time line at the bottom with the year represented by the design highlighted.

The Royal Collection Trust describes the formal 1859 portrait by German painter Franz Xaver Winterhalter: “The Queen is wearing the Robes of State, the circlet, and the earrings and necklace made by Garrard’s, the jewellers in 1858, the year before this was painted. Her left hand rests on some papers, next to the Imperial State Crown, and in the distance we can see a view of Westminster.”

On the right-hand stamp in the nondenominated first-class pair, the queen is shown two years later, in 1878, with Prime Minister Benjamin Disraeli at Osborne House from a painting by Theodore Blake Wirgman.

The London design firm Webb & Webb Design designed these six stamps. International Security Printers printed them by lithography in sheets of 60, sold in panes of 30 at most postal outlets. The stamps are square, 35 millimeters by 35mm, and are perforated gauge 14.5.

Designed by Common Curiosity, a graphic design studio based in Birmingham and London, the souvenir sheet shows an illustration of Prince Albert at age 22 in the selvage. “The Legacy of Prince Albert” is printed in gold under this black-and-white illustration.

The lodge has served as the headquarters of Trees for Cities since 2013.

On its website, the charity said: “The lodge was originally constructed as a ‘Model Housing for Families’ and displayed at the Great Exhibition of 1851 before being moved to Kennington Park.

“The prototype design was commissioned by Prince Albert as president of the Society for Improving the Condition of the Labouring Classes. It has influenced housing design and construction around the world … ”

In 1852, Prince Albert purchased an estate in Scotland for Queen Victoria. The next year, construction on the new royal residence, Balmoral Castle, began and was completed in 1856.

The first of the two £1.55 stamps features the Crystal Palace, the home of the Great Exhibition of 1851 organized by Henry Cole and Prince Albert.

The other £1.55 stamp shows Royal Albert Hall, the concert hall that opened in 1871 in London.

International Security Printers printed the souvenir sheet by lithography. The sheet measures 146mm by 74mm, and the stamps are 41mm by 30mm each, perforated gauge 14.5 by 14.

One pane includes the four stamps from the souvenir sheet, and another is a pane of nine stamps with a central label showing a photograph of Victoria and Albert.

The nine stamps include four Queen Elizabeth II definitives (two 2-penny and two 50p) and four first-class stamps showing a young Queen Victoria as she appeared on the world’s earliest stamps of 1840 and 1841. The latter designs are from commemoratives issued in 2015 and 2016 to mark the 175th anniversaries of the 19th-century stamps.

The other two panes contain the stamps from the se-tenant pairs, with the two £1.65 stamps and the £1.35 stamp showing the 1859 portrait on one pane; and the remaining £1.35 denomination and the two first-class stamps on the other.