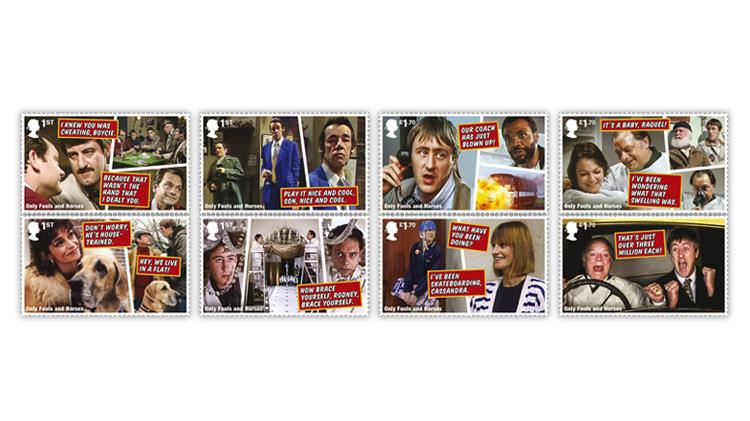 Scenes from the popular British sitcom Only Fools and Horses are shown on eight stamps issued by Royal Mail Feb. 16 to celebrate the 40th anniversary of this television series. 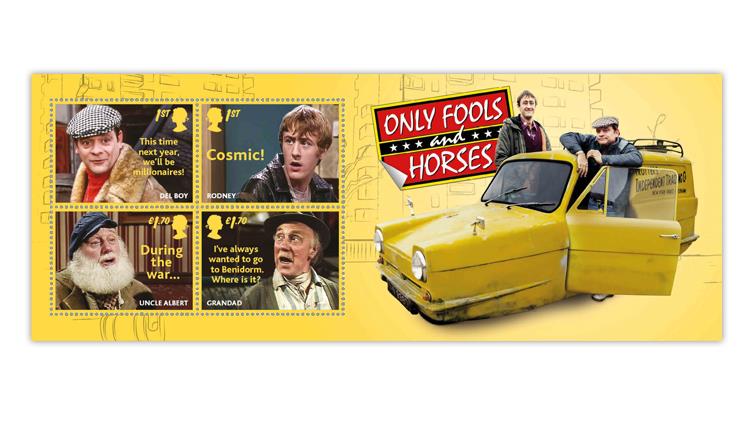 New stamps from Great Britain’s Royal Mail celebrate the 40th anniversary of the British sitcom Only Fools and Horses.

The 12 stamps were issued Feb. 16: eight in four se-tenant (side-by-side) pairs and four in a souvenir sheet. Royal Mail, in partnership with BBC Studios, revealed the stamp images Feb. 2.

The series debuted Sept. 8, 1981, on BBC. More than 60 episodes later, it ended in December 2003. However, like many TV shows, it lives on in reruns, including on the British pay-television channel Gold.

Gold’s website describes Only Fools and Horses as a classic comedy that follows “the misadventures of two lovable rogue traders, Del Boy and Rodney Trotter. The brothers scrape their living by selling dodgy goods in the belief that one day they will be millionaires, sharing their council flat in the early years with Grandad and later on with Uncle Albert, a WWII veteran with a naval anecdote for any occasion. With iconic performances from David Jason and Nicholas Lyndhurst, John Sullivan’s comedy is a strong contender for the title of Britain’s most-loved sitcom.”

According to Royal Mail, 24.3 million people watched the series at its peak and it was so popular that the show’s writer and creator, John Sullivan, “even received letters from pub landlords telling him their pubs were deserted on Sunday evenings because so many people were at home watching the show.”

Royal Mail also said, “The impact of Only Fools and Horses on the life of the nation is demonstrated by many of the show’s catchphrases and words having entered common usage — in 2003 ‘lovely jubbly’ was listed in the Oxford English Dictionary.”

According to a collaboration between Dictionary.com and Oxford University Press, the phrase is “used to express delight or approval.”

The souvenir sheet introduces the show’s four main characters and their catchphrases, and the stamps in se-tenant pairs show scenes from the series along with captioned one-liners.

Starting in the upper left of the souvenir sheet, the nondenominated first-class stamp shows Derek “Del Boy” Trotter (portrayed by David Jason). His younger brother Rodney (Nicholas Lyndhurst) is pictured on the other first-class stamp in the sheet.

The episodes “A Losing Streak” (Nov. 4, 1982) and “Sleeping Dogs Lie” (March 21, 1985) are represented on one of the two pairs of nondenominated first-class stamps. The latter stamp also shows the character Marlene (Sue Holderness) and her dog Duke.

The stamps in the other two pairs are denominated £1.70. One pair depicts scenes from “The Jolly Boys’ Outing” (Dec. 25, 1989), including the character Denzil Tulser (Paul Barber); and “The Unlucky Winner Is…” (Jan. 28, 1989) with Cassandra (Gwyneth Strong), who would marry Rodney two episodes later.

The stamps in se-tenant pairs were produced in sheets of 60 (sold in panes of 30 at most postal outlets). These stamps measure 50 millimeters by 30mm each and are perforated gauge 14 by 14.

Royal Mail also issued two booklets for the 40th anniversary of Only Fools and Horses.

The 24-page prestige stamp booklet includes four panes of stamps and images and background information about the sitcom.

The other pane includes a block of eight Queen Elizabeth Machin definitive stamps (three first-class, two second-class and three 20p) with the Trotters Independent Trading Co. logo shown in a label in the center.

The other booklet contains the Del Boy and Rodney first-class stamps from the souvenir sheet and four first-class Queen Elizabeth II definitives.

In conjunction with the Only Fools and Horses issue, Royal Mail also is offering postmarks, first-day covers, presentation packs, and 13 postcards reproducing the designs of the include stamps and the souvenir sheet.