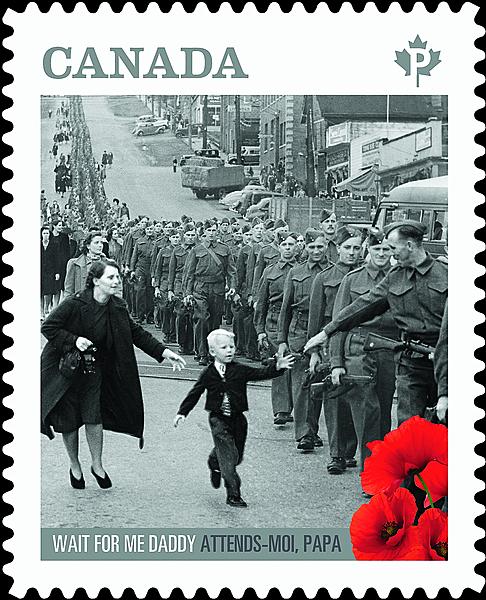 Canada Post issued its Wait for Me Daddy nondenominated (85¢) permanent-rate stamp Oct. 4 in a booklet of 10 and a souvenir sheet of five. Two nondenominated ($2.50) international-rate picture postal cards also were issued.

The Wait for Me Daddy stamp shows a black-and-white photograph taken by Claude P. Dettloff Oct. 1, 1940, of a five-year-old boy in New Westminster, British Columbia, running from his mother’s grasp to reach for his father, who is marching in a long line of World War II soldiers. The father is reaching his hand back toward his son.

Canada Post stated that the image “is one of the most famous Canadian photos from the Second World War, symbolizing the sacrifices families made for the war effort.”

The stamp design by Susan Mavor includes a color image of red remembrance poppies at lower right, and the inscriptions “Wait for Me Daddy” and “Attends-Moi, Papa” along the bottom edge.

The family — Pvt. Jack Bernard, his wife Bernice and their son Warren (known as “Whitey”) — were reunited in October 1945. The two international-rate picture postal cards have the stamp photograph on one and a reunited family photo on the second.

A Wait for Me Daddy statue was dedicated Oct. 4 in New Westminster, coinciding with the stamp issuance.

The Wait for Me Daddy stamp was printed by Canadian Bank Note by six-color offset lithography on Tullis Russell paper, with general tagging on all four sides.