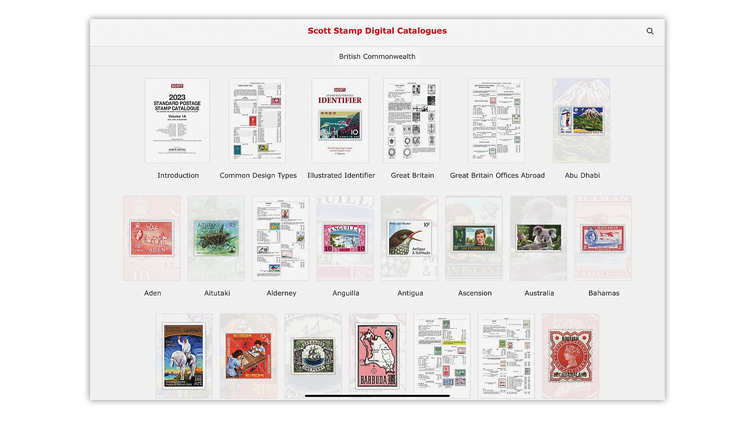 Screen capture of the Scott Catalogue Digital Subscription library for British Commonwealth. The new offering was first made available in June and is among four new regional catalog libraries offered.

Along with the Scott Catalogue Digital Subscription for the Scott Standard catalogs we launched earlier this year, we wanted to go beyond the print catalogs a bit with capabilities.

Besides adding more images, better search functionality and easier navigation for the digital catalogs, we were exploring options to group countries in different ways, too.

One of the more frequent questions we receive from customers relates to finding stamps that might be in a collector’s area of interest. For example, some collectors might only collect British Commonwealth nations or French colonies.

While a specific regional catalog is something we probably would not publish in a print edition, it is something we could bring to market as a digital subscription offering and at a much lower cost compared to having to purchase a subscription to the entire six-volume Scott Standard Postage Stamp Catalogue.

The four new regional catalogs being offered as a digital subscription are as follows:

Germany and Areas. In addition to Germany, significant listings include the Marshall Islands, German Occupied States and German Offices Abroad. This volume focuses on more than 15 locations across the globe that have been influenced by Germany.

France and Colonies. Notable countries include French territories throughout Asia, Africa and the Americas. Other important listings include France Offices Abroad, Reunion, and colonies and possessions such as French Colonies, French Congo, French Guiana and French Polynesia. More than 60 stamp-issuing entities are included in this volume.

Portugal and Colonies. This volume includes Portuguese colonies in Europe, Africa and abroad. In total, it covers 25 different areas with links to Portugal.

Depending on the success of these four new offerings, it is possible others will be added as options in the future.