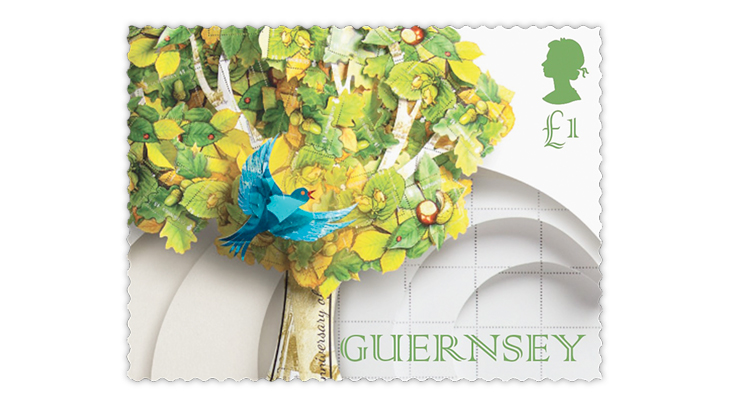 Illustrator and paper sculptor Gail Armstrong used recycled Guernsey and Alderney stamps to create the three-dimensional paper cut image shown on this stamp to be issued Feb. 9. This £1 stamp is the first in Guernsey’s Heart of the Forest series.

On Feb. 9, Guernsey will issue the first stamp in a series highlighting sustainability. Created by award-winning paper sculptor and illustrator Gail Armstrong, the Heart of the Forest series of four stamps will be issued throughout 2022.

The first stamp in the series has a £1 denomination and shows a chestnut tree and a bluebird. To create this three-dimensional paper cut image, Armstrong folded and shaped previously issued Guernsey and Alderney stamps. These recycled stamps now help to promote forest sustainability in this new issue.

According to Guernsey Post, the inspiration for the theme of this series comes from Love Paper, a global campaign that promotes both the sustainable and attractive attributes of paper.

“Even in today’s digital world,” says the Love Paper website, “paper remains unique in its ability to touch our lives. Paper is renewable, recyclable and the natural support of new ideas and creativity.”

Run by the nonprofit organization Two Sides, Love Paper says that in addition to promoting the environmental credentials of paper, the campaign calls attention to paper’s ability to improve learning and mental health, as well as to enhance creativity.

Sections of the Love Paper website include articles on the positive effects of letter writing as well as puzzles, games and templates for paper crafts.

In the Jan. 13 press release about the stamp series, Bridget Yabsley, head of philatelic at Guernsey Post, said, “We couldn’t be happier with the stamps,” adding that the souvenir sheet will bring “the heart of the forest together.”

Recent work by Armstrong can be seen on the United Nations’ World Toilet Day stamps issued Nov. 19, 2021. She also designed the $1.05 U.N. stamp (Scott New York 1048) in the 2012 issue commemorating the Rio+20 conference on sustainable development and Guernsey’s 2009 set of stamps marking the 500th anniversary of the coronation of King Henry VIII (1045-1050).

The first stamp of the Heart of the Forest series is available to pre-order starting Jan. 26 and to order starting Feb. 9 by visiting the Guernsey Post website.