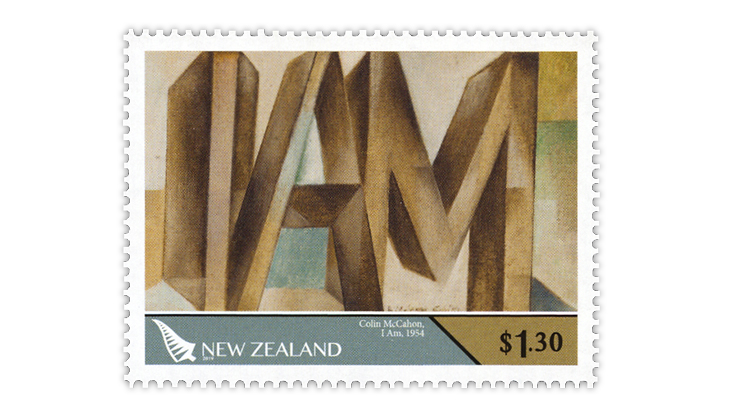 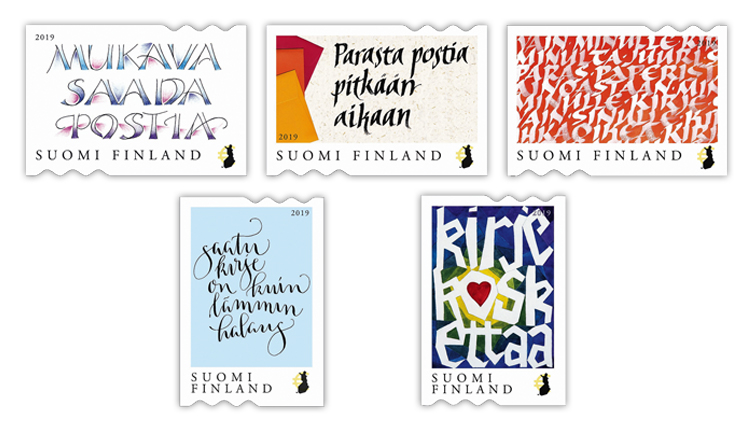 The five winning entries in a calligraphy contest with the theme “A Touching Letter” are shown on domestic-rate Finnish booklet stamps issued May 8. 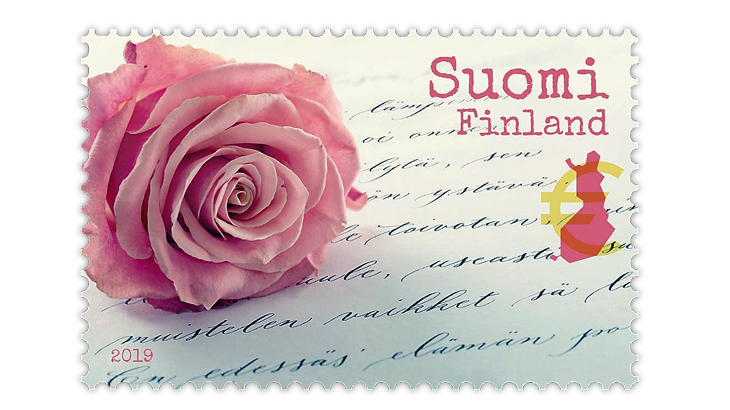 A greeting stamp from Finland pictures a handwritten letter and a pink rose. 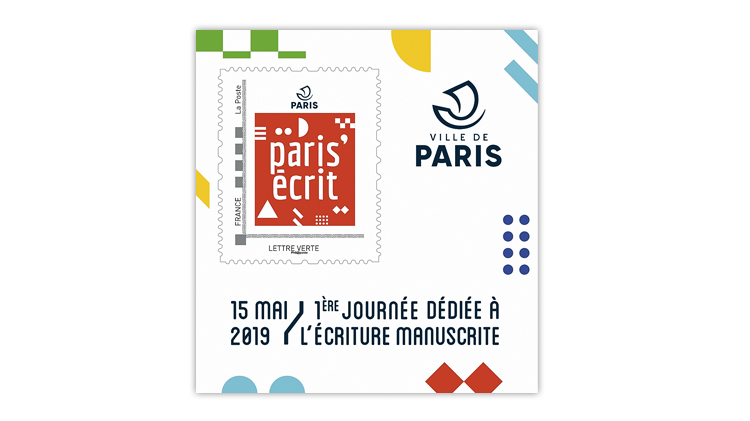 France’s La Poste created a personalized stamp, shown here in a publicity image, for the May 15 celebration of letter writing in Paris. 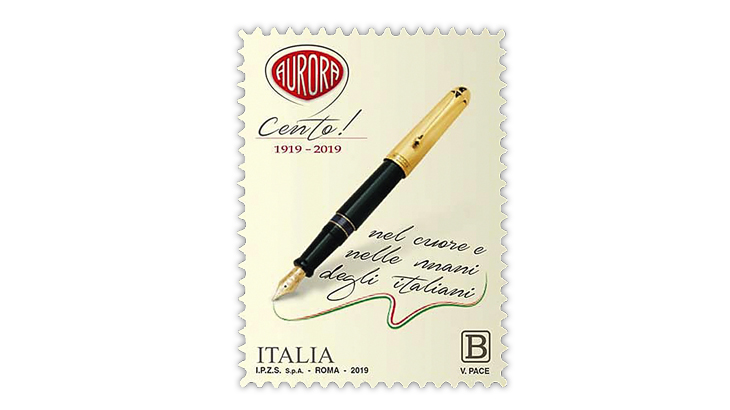 A recent stamp from Italy salutes the 100th anniversary of Aurora, a manufacturer of fountain pens and writing instruments. 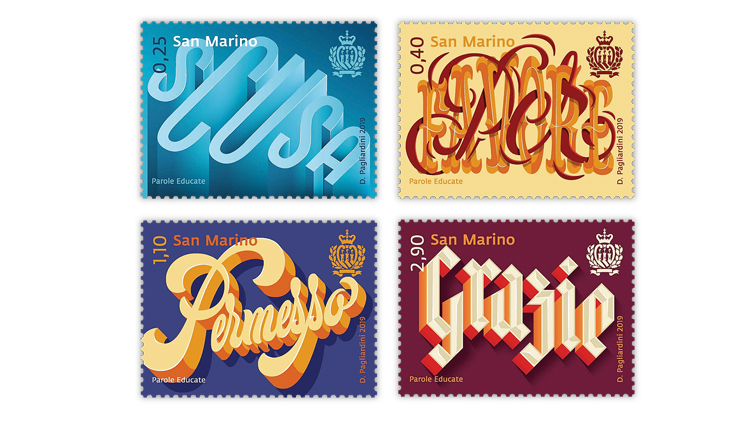 Four polite words (or phrases) are displayed in Italian on stamps from San Marino. In English, the words are sorry, please, excuse me and thank you. 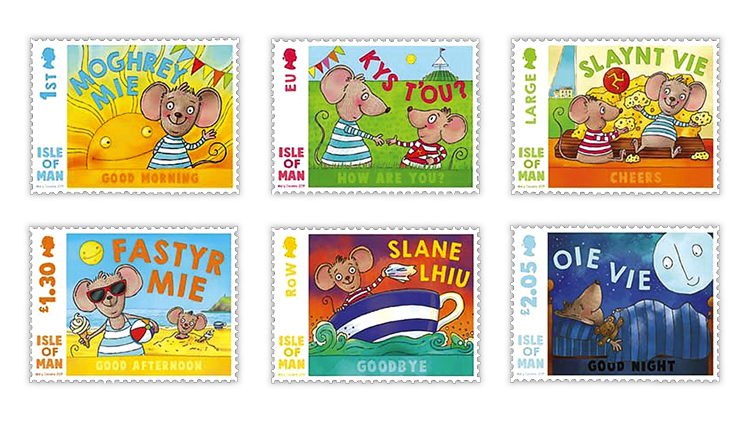 Greetings in Manx are highlighted on a new set of stamps from the Isle of Man.
Previous
Next

Several new stamps focus on the power of words.

For example, a New Zealand stamp reproduces a painting comprised of two words: I Am. The $1.30 stamp was issued July 3 in a set of five honoring artist Colin McCahon (1919-87).

New Zealand Post said: “I Am [painted in 1954] was the first of many paintings by McCahon constructed entirely from words. Here his lettering draws on display advertising, movie credits and the multiple perspectives of Cubism.”

The stamp was issued in a sheet of 25. It also is included in a souvenir sheet with the other four stamps in the set: Titirangi Landscape, $1.30; The Angel of the Annunciation, $2.60; Red and Black Landscape, $3.30; and The First Waterfall, $4.

Calligraphy, the art of handwriting, is featured on Finnish booklet stamps issued May 8.

The designs of these five nondenominated domestic-rate stamps depict the winning entries in a competition for members of the Finnish Calligraphy Society. Finland’s post office, Posti, reports that the winners were Iiris Lyra, Marja-Liisa Neuvonen, Maarit Ali-Marttila-Olkkola and Taru Tarvainen (two designs).

The theme of the competition was “A Touching Letter,” and the words in the calligraphic art reflect letter writing. For example, the entry by Neuvonen reads “Mukava Saada Postia,” which translates to “Nice to receive mail.”

The artist said: “It is quite rare to have personal paper mail during the current electronic communications. I am very happy about letters or cards that occasionally bump into my mailbox. I wish we would still send greetings to each other through mail today.”

Another Finnish stamp issued May 8 features a handwritten letter as part of its design. One of six domestic-rate stamps in a booklet called Say It with Flowers, the design depicts a pink rose in addition to the letter.

Anna-Mari West, the photographer and postcard artist who designed the stamps, said: “I wanted to photograph subjects that would be suitable for sending many kinds of greeting cards and invitations.”

The city of Paris and France’s La Poste set aside May 15 as a day to reconnect with letter writing, and La Poste’s participation included issuing what it calls “collector stamps” for the event.

A “collector stamp” is a personalized stamp created by La Poste. The vignette for the May 15 stamps shows the logo of the day featuring the words “paris’ ecrit” (Paris is written) on a red background. Included at the top of the design is the city’s new symbolic ship logo.

According to La Poste, it issued two nondenominated collector stamps May 15. Shown nearby is a publicity image of a souvenir sheet with a single stamp. The frame of the stamp is inscribed “lettre verte,” which means that it pays the domestic green letter (or second-class) rate, currently 0.88. La Poste sold the stamp for 1.10. A version of this stamp for use on international mail sold for 1.60, according to La Poste.

According to the city of Paris’ website (quefaire.paris.fr), more than 200 locations, including 41 post offices, participated in this festival of writing.

A fountain pen and a short handwritten note are pictured on an Italian stamp commemorating the 100th anniversary of Aurora. Founded in 1919 in Turin, Italy, Aurora manufactures fountain pens and other writing instruments.

The note on the stamp translates to “in the heart and hands of Italians.”

The stamp was issued May 24, the latest in a series featuring Italian companies and products. The stamp pays the basic domestic rate, currently 1.10, represented by the B in a rectangle in the lower right corner of the design.

According to the press release announcing the stamps: “The series wants to infuse the genuine value of simple kind words like ‘sorry,’ ‘please,’ ‘excuse me,’ and ‘thank you’ to encourage behaviours inspired by gratitude respecting everyone and to promote peaceful coexistence and harmony between peoples.”

The words are written in Italian on the stamps, and graphic designer Davide Pagliardini used a different style of lettering for each design. The words and the denominations are “scusa,” 0.25; “per favore,” 0.40; “permesso,” 1.10; and “grazie,” 2.90.

Each design is inscribed “Parole Educate” in the lower left corner, Italian for “polite words.”

A set of six stamps issued July 4 by the Isle of Man encourages the use of the Manx language.

Text in the presentation pack for the stamp issue explains its purpose: “The Isle of Man Post Office (Oik Postagh Ellan Vannin) is pleased to encourage popular use of the Manx language by presenting this joyful set of six stamps which is a collaboration between Culture Vannin and Manx artist Mary Cousins. A story in pictures of a day in the life of two Manx mice forms an introduction to basic greetings in Manx Gaelic.”

The issue coincides with the 120th anniversary of the Manx Language Society and with 2019 as the International Year of Indigenous Languages.

The set begins with a nondenominated first-class stamp (currently 57 pence) showing a mouse and the rising sun. The Manx words “Moghrey Mie” (pronounced Morr-a-May, according to the Isle of Man Post Office) are shown above the sun with the English translation “Good Morning” below the design.

The other words presented on the nondenominated stamps in the set are kys t’ou (how are you), European rate (90p); slaynt vie (cheers), large-size letters (£1.10); and slane lhiu (goodbye), rest-of-the-world international rate (£1.50).

The stamps were designed by EJC Design using the illustrations by Cousins and text by Jamys O’Meara of the Manx language development office for Culture Vannin.