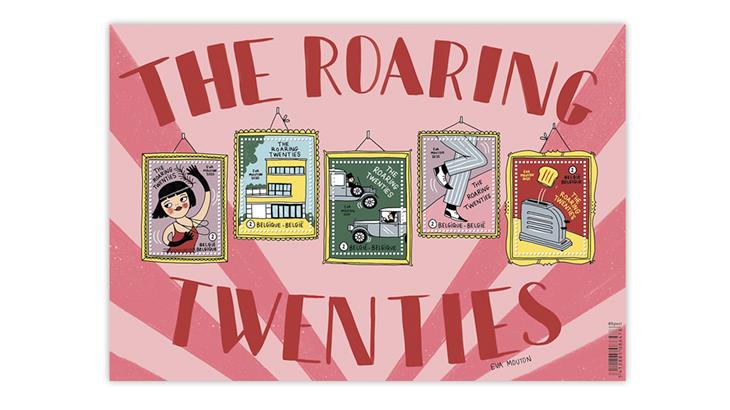 Belgium issued a pane of five stamps Aug. 31 celebrating the decade of the 1920s. 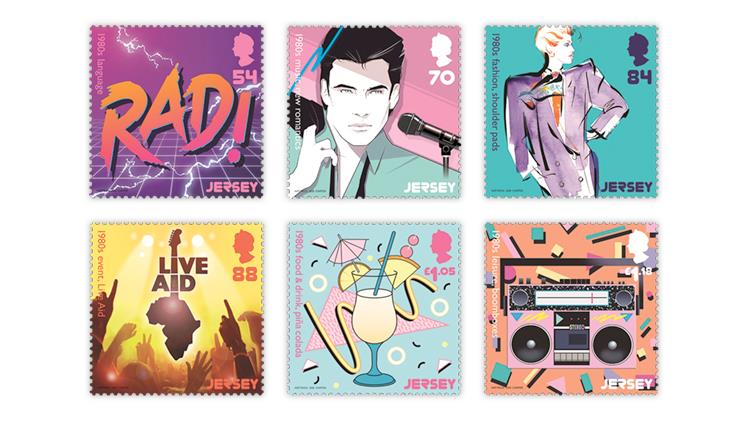 New stamps from Jersey represent the language, music, fashion, food and drink, and leisure pursuits of the 1980s. The set also includes a stamp honoring the 1985 Live Aid benefit concert as one of the popular culture events of the decade. 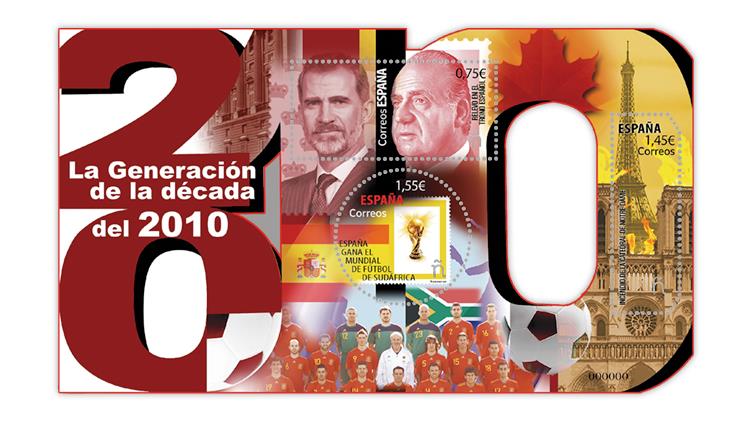 A souvenir sheet in Spain’s Generations series commemorates three events that occurred in the 2010s: the abdication of King Juan Carlos I, the winning of soccer’s World Cup in 2010, and the fire at Notre Dame Cathedral in Paris.
Previous
Next

The decades of the 1920s, 1980s and 2010s are examined on new stamps from Belgium, Jersey and Spain, respectively.

Belgium’s Bpost issued a pane of five stamps Aug. 31 titled “The Roaring Twenties.” Illustrator and cartoon artist Eva Mouton said that she immersed herself in the decade before she created her designs for these stamps.

Two of the stamps feature fashions of the decade, with a flapper shown on the first stamp on the left and striped suit pants and shoes with spats on the fourth stamp.

The other three designs represent architect Leon Stynen, the growing popularity of automobiles and the introduction of household appliances, such as the automatic pop-up toaster.

Mouton’s illustrations are shown inside picture frames. The stamps are nondenominated, paying the second-class rate for nonstandard-size letters weighing up to 100 grams (currently €1.96).

Six stamps and two souvenir sheets issued Oct. 6 by Jersey Post focus on the popular culture of the 1980s.

Each stamp set includes designs for language, music, fashion, events, food and drink, and leisure pursuits of the decade.

The stamps are sold in separate panes of 10 and in a souvenir sheet with the six designs se-tenant (side-by-side). A time line is shown in the selvage.

The other souvenir sheet contains a single £3 stamp. Jersey Post describes this sheet as featuring “a playful reimagining of Jersey’s main shopping street in the 1980s reflecting the vibrancy, fashions and colours synonymous with the decade.”

The latest issue in that series commemorates events of the years 2010-19 as selected by stamp collectors and others. That souvenir sheet of three stamps was issued Sept. 21.

The rectangular €0.75 stamp commemorates Felipe VI becoming king of Spain on June 19, 2014, after the abdication of his father, Juan Carlos I.

The round €1.55 stamp in the center of the sheet celebrates Spain’s soccer team winning the 2010 World Cup.

The long €1.45 stamp on the right side of the sheet remembers the April 15, 2019, fire at the Notre Dame Cathedral in Paris, France.