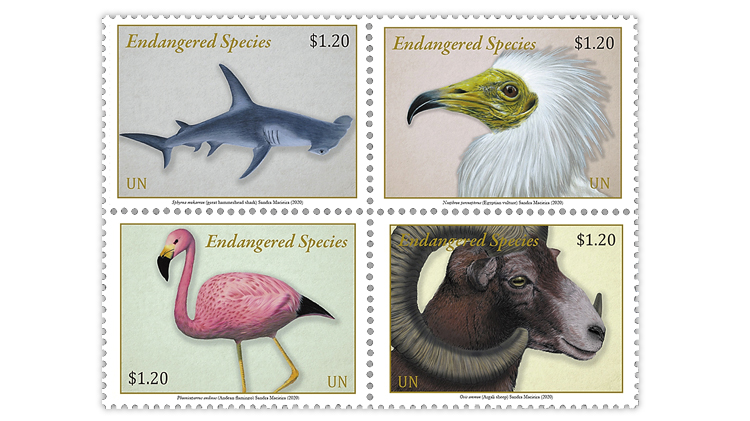 The United Nations Postal Administration issued three panes of 16 Endangered Species stamps Feb. 17, each with four different se-tenant (side-by-side) designs. The $1.20 stamps in the pane for use from the post office at U.N. headquarters in New York City depict a great hammerhead shark, Egyptian vulture, Andean flamingo and argali sheep. 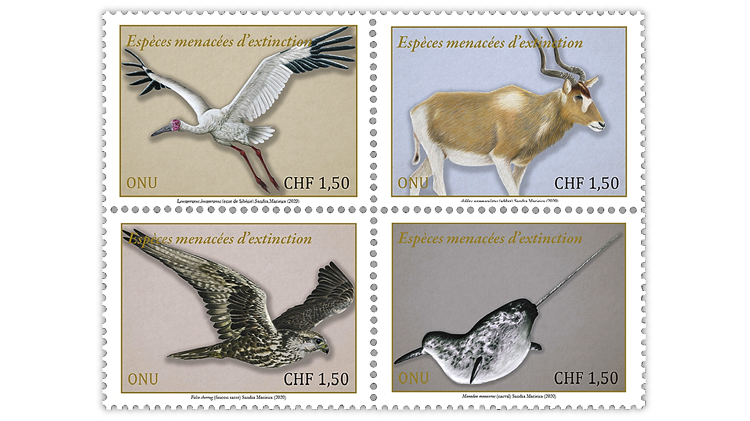 The new 1.50-franc Endangered Species stamps for use from the United Nations post office at the Palais des Nations in Geneva, Switzerland, show a Siberian crane, addax, saker falcon and narwhal. 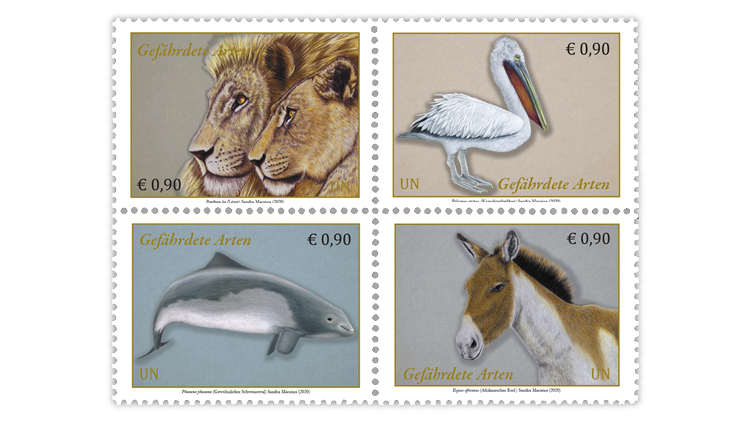 Lions, a Dalmatian pelican, harbor porpoise and kiang are featured on the United Nations €0.90 Endangered Species stamps for use from the post office at the Vienna International Center in Vienna, Austria.
Previous
Next

The 12 stamps were issued Feb. 17 to coincide with the opening day of the 13th session of the Conference of the Parties to the Convention on the Conservation of Migratory Species of Wild Animals (CMS COP13) in Gandhinagar, India. The theme for the conference was “Migratory species connect the planet and together we welcome them home.”

The stamps continue the UNPA’s Endangered Species series, which began in 1993. Like previous stamps in this series, the new stamps were issued in panes of 16, each with four se-tenant (side-by-side) designs. There is a separate pane for each U.N. post office.

The great hammerhead shark is named both for the shape of its head and its size (up to 20 feet long and almost 1,000 pounds).

Although it is called the Egyptian vulture, this yellow-faced scavenger is also found in southern Europe and Asia and other parts of Africa. It has been reported to use both pebbles and twigs as tools.

The Andes flamingo is considered the rarest of the six known species of flamingos, with an estimated population of 34,000. In the summer, Andes flamingos live in flocks in the salt lakes of South America’s Andes Mountains. They migrate to the lower wetlands in the winter.

Another mountain dweller, the argali sheep lives in herds in the mountain ranges of central Asia.

According to the International Crane Foundation, Siberian cranes are known to migrate almost 10,000 miles round trip annually. These large, snowy white birds are critically endangered with a remaining population of about 3,600 to 4,000, the foundation reported.

A white antelope with spiral horns, the addax is almost extinct in its native habitat of the deserts of northern Africa, with perhaps only 100 individuals remaining in the wild. There are believed to be about 2,000 addaxes living in zoos and ranches around the world.

In a report about the Saker Falcon Global Action Plan, the Convention on the Conservation of Migratory Species of Wild Animals says that these large, powerful birds of prey breed “in the Palearctic region from Central Europe to East Asia, and migrate south to wintering areas in Africa, Southern and Eastern Asia.”

The goal of the 10-year action plan (2015-24) is to reverse the rapid decline of the saker falcon population and to re-establish a healthy population throughout this falcon’s range.

An inhabitant of Arctic waters, the narwhal is nicknamed “the unicorn of the seas” because of the male’s spiral ivory tusk tooth that can grow up to 10 feet long.

The African lion is the only feline represented on this set of stamps. It is also the only wild cat to live and hunt in a group (called a pride).

The Dalmatian pelican is described as a “massive pelican with a disheveled appearance” on eBird, a website managed by the Cornell Lab of Ornithology that allows birdwatchers around the world to document and share their findings. This pelican inhabits freshwater lakes and swamps in southeastern Europe and central Asia.

“Harbor porpoises are found throughout the temperate coastal waters of the Northern Hemisphere,” according to the National Geographic website. “As their name suggests, they prefer the shallows, less than 500 feet deep, and are commonly seen in harbors and bays. They are also known to frequent inland waters, including rivers, estuaries, and tidal channels.”

The kiang, also known as the Tibetan wild ass, inhabits alpine meadows and grassland plains of the Tibetan Plateau, with some herds found in nearby regions in Nepal and India.

In a press release announcing the stamps CITES secretary-general Ivonne Higuero said: “We are most grateful to the UN Postal Administration for our long-standing cooperation to raise awareness of CITES-listed species through these stamps. We are happy to hear that they are among the most popular series issued by the UNPA. Not unlike the letters on which these stamps might go, migratory species travel around the world to find their destinations and seasonal habitats. This year we are honoured to invite our sister convention CMS to feature CITES-listed migratory species that are also covered by CMS.”

Rorie Katz of the United Nations designed the stamps using illustrations by Sandra Macieira of Portugal.