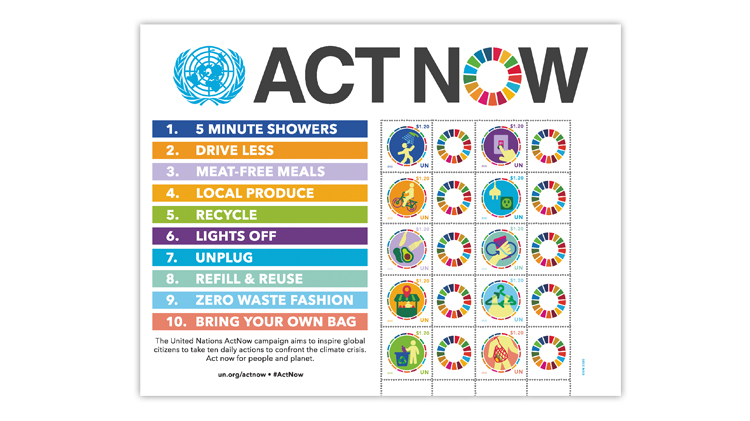 The United Nations Postal Administration issued a pane of 10 stamps and labels March 27 that publicizes the Act Now campaign for climate action. The stamp designs represent 10 actions people can take in their daily lives. 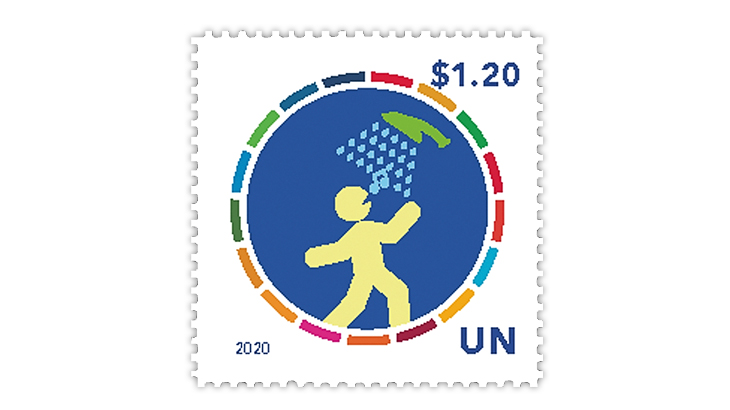 The first stamp in the UNPA’s Act Now pane represents the action of taking 5-minute showers to save water.
Previous
Next

The stamps are denominated $1.20 for use from the post office at U.N. headquarters in New York City.

The United Nations describes the Act Now campaign as a “global call to individual action on climate change.”

“Primarily an online and social media campaign, ActNow will educate and encourage individual actions, mainly by adjusting consumption patterns,” according to the United Nations. “By changing our habits and routines, and making choices that have less harmful effects on the environment, we have the power to confront the climate challenge.”

The Act Now website reported on March 25 that people around the world had recorded 682,059 climate actions as part of this campaign.

The stamp pane presents 10 key actions that people can take in their daily lives. These actions are listed in the selvage on the left side of the pane, and the stamp designs show emblems representing these actions.

Starting in the upper left, the first stamp symbolizes “5 minute showers.” On the aforementioned website, the United Nations said: “Less than 3% of the world’s water is drinkable and humans are polluting rivers and lakes faster than nature can recycle and purify water. Taking shorter showers saves water and energy.”

Continuing down the first column, the next stamp shows an emblem of a person riding a bicycle, symbolizing “drive less.”

Illustrated on the third stamp is a knife, fork and avocado for “meat-free meals.” This design differs from the emblem for that action on the website, which depicts what looks like a strawberry and carrot with a knife and fork.

The fourth stamp promotes the buying of local produce and pictures a produce stand.

The bottom stamp in the first column encourages recycling.

“Lights off” and “unplug” are represented on the first two stamps in the second column. The designs feature a light switch, and a cord and outlet, respectively.

The hand, cup and s-shaped arrow depicted on the next stamp symbolize “refill and reuse” to prevent plastic waste.

The emblem of a hanger and sleeveless garment shown on the fourth stamp illustrates the action called “zero waste fashion.” According to the website, “creating new clothes out of old ones, you help to save water and reduce waste.”

The website also challenges people to “upcycle” their old clothes for new looks and to share their creations on social media.

The last stamp encourages people to bring their own reusable bags to replace single-use plastic bags.

The labels feature the campaign’s emblem, which also appears as the “O” in “ACT NOW” in the pane’s upper selvage.

The selvage also includes the U.N. emblem in the upper left and this message in the lower left: “The United Nations ActNow campaign aims to inspire global citizens to take ten daily actions to confront the climate crisis. Act now for people and planet” followed by the web address un.org/actnow and “#ActNow.”

The UNPA considers this pane of 10 stamps and labels a “special event sheet.” It was not previously announced as part of UNPA’s 2020 stamp program.

The UNPA has posted the following notice on its website: “Important information and alert: Please note that your orders and/or mail may be impacted or delayed due to the restrictions at the United Nations Headquarters and the United Nations office in Vienna as a result of the COVID-19 outbreak. We are, however, committed to process and fulfill your orders as soon as we can. If there’s any question, please email us at unpanyinquiries@un.org or UNPA-Europe@un.org or UNPA-ASIA@un.org. Thank you for your patience and understanding.”