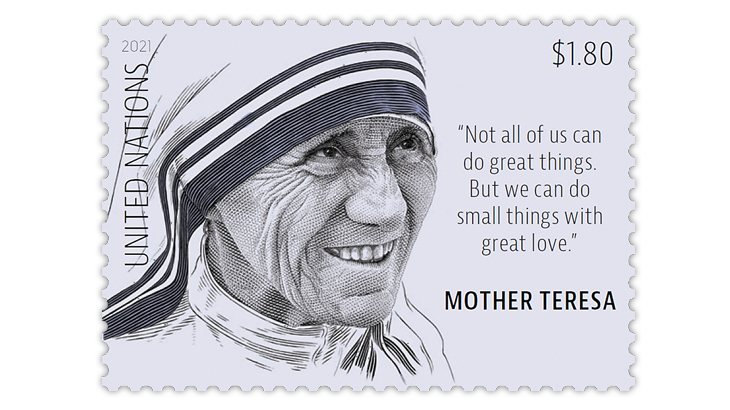 The United Nations Postal Administration is honoring Mother Teresa on a $1.80 definitive stamp to be issued Aug. 12 at the Great American Stamp Show.

The $1.80 Mother Teresa stamp is intended for use from the U.N. post office at U.N. headquarters in New York City.

Mother Teresa was born Agnes Gonxha Bojaxhiu in Skopje, Macedonia, on Aug. 26, 1910. When she was 12 years old, she felt God calling her to devote her life to mission work. Six years later, she moved to India to help the poor.

Mother Teresa aided the orphaned, poverty-stricken and sick for more than 45 years through the Missionaries of Charity, a Roman Catholic congregation she founded in 1950 in Calcutta. In 1979, she was awarded the Nobel Peace Prize for her work. She died on Sept. 5, 1997.

On Sept. 4, 2016, Mother Teresa was canonized by the Roman Catholic Church. On that day, Pope Francis named her St. Teresa of Calcutta (Kolkata) at St. Peter’s Square in Vatican City.

A first-day ceremony for the UNPA Mother Teresa stamp will be held on Aug. 12 at 3 p.m. on the show floor at the Great American Stamp Show. The four-day event stamp exhibition and bourse runs Aug. 12-15 at the Donald E. Stephens Convention Center in Rosemont, Ill., just outside Chicago.

The stamp features an engraved-style portrait of Mother Teresa. A quote appears to the right of the portrait: “Not all of us can do great things. But we can do small things with great love.”

The new UNPA Mother Teresa stamp measures 50 millimeters by 35mm and is perforated gauge 14 by 14.25. A total of 160,000 stamps were printed by Joh. Enschede of the Netherlands in panes of 20.