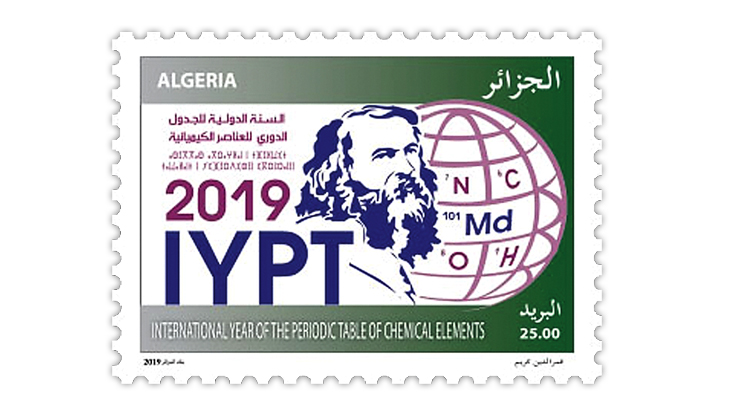 Algeria’s stamp honoring the International Year of the Periodic Table of Chemical Elements includes a portrait of Dmitri Mendeleev, who developed this system for the classification of elements. 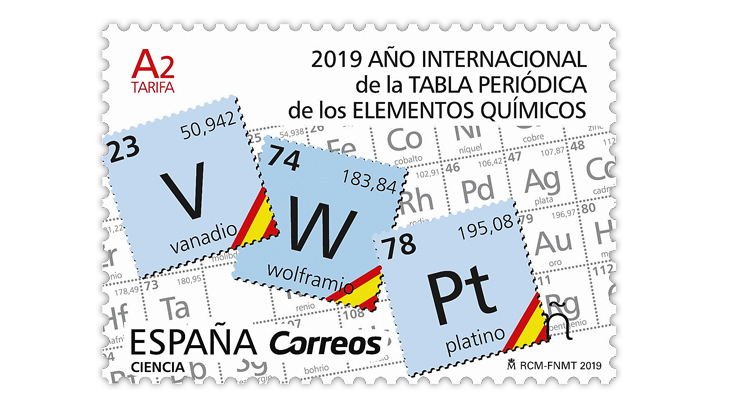 The elements vanadium, tungsten and platinum are featured on Spain’s International Year of the Periodic Table of Chemical Elements commemorative stamp. 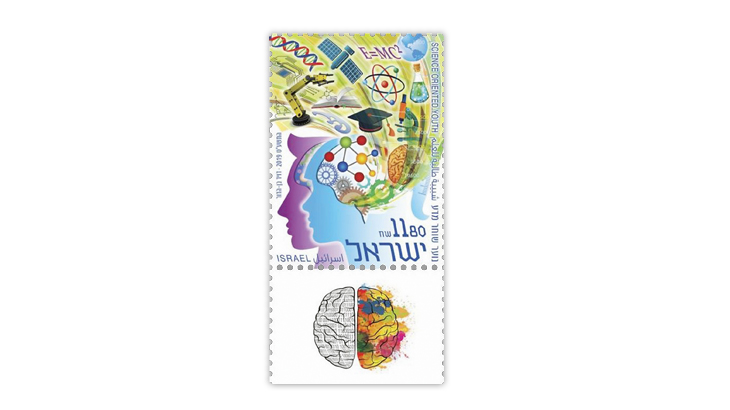 Several scientific fields are represented on Israel’s Science Oriented Youth stamp. The design on the attached tab symbolizes the logical and creative parts of the brain.
Previous
Next

Spain and Algeria issued stamps in January to celebrate 2019 as the International Year of the Periodic Table of Chemical Elements.

The United Nations General Assembly proclaimed this year "to recognize the importance of the Periodic Table of Chemical Elements as one of the most important and influential achievements in modern science reflecting the essence not only of chemistry, but also of physics, biology and other basic sciences disciplines."

The year also commemorates the 150th anniversary of the establishment of the periodic table by Russian scientist Dmitri Mendeleev (1834-1907).

The press release from Algerie Poste provided a simple definition of the periodic table, stating that it "groups together all the known chemical elements, classified according to their number of protons, or atomic number. The elements in the same line or column have similar chemical properties."

Kamar Eddine Krim designed the stamp. The Bank of Algeria printed it by offset.

Spain’s International Year of the Periodic Table of Chemical Elements stamp is part of its Science series.

Issued Jan. 9, this self-adhesive stamp is nondenominated. The inscription "A2 Tarifa" in the upper left indicates that it pays the rate for domestic mail weighing between 20 grams and 50 grams, currently €0.70.

The design depicts part of the periodic table in the background with three tiles from the table in blue featured in the foreground.

The tiles are for vanadium (v), tungsten (w) and platinum (pt). Stripes of Spain’s national colors, red and yellow, are shown in the lower right of each blue tile.

The Royal Spanish Mint (RCM-FNMT) printed the stamp by offset in sheets of 50.

The new commemorative is not the first Spanish stamp to feature the periodic table. A stylized image of the table is shown on a €0.30 stamp issued Feb. 2, 2007 (Scott 3476), to mark the 100th anniversary of Mendeleev’s death.

Portugal also has announced plans to release a stamp this year for the International Year of the Periodic Table of Chemical Elements, but no further details have been revealed. No doubt other postal administrations will issue stamps honoring the year as well.

For more information about the International Year of the Periodic Table of Chemical Elements, visit the website www.iypt2019.org.

Israel celebrates science with a new stamp issued March 5 commemorating a program called "Science Oriented Youth." The program began 50 years ago, in 1969, at Tel Aviv University. Since then, it has expanded to other universities and academic institutions.

However, the program is not for university students; instead it is geared to younger students, particularly those in grades 5 through 12.

A new-issue announcement published on the website of the Israel Philatelic Federation (www.israelphilately.org.il) said: "These classes offer Israeli pupils materials and fields of study beyond what is available within the school curriculum, introducing girls and boys to scientific thought processes and innovative research methods.

Several of these scientific fields are represented in David Ben-Hador’s design for the 11.80-shekel commemorative stamp and attached label, also known as a tab.

In addition to scientific equipment and symbols, the stamp design includes an image of a brain; a globe showing North America, Central America and part of South America; and Albert Einstein’s E = MC2 equation for the theory of special relativity.

Cartor Security Printing of France printed the issue in panes of 15 stamps with five tabs.