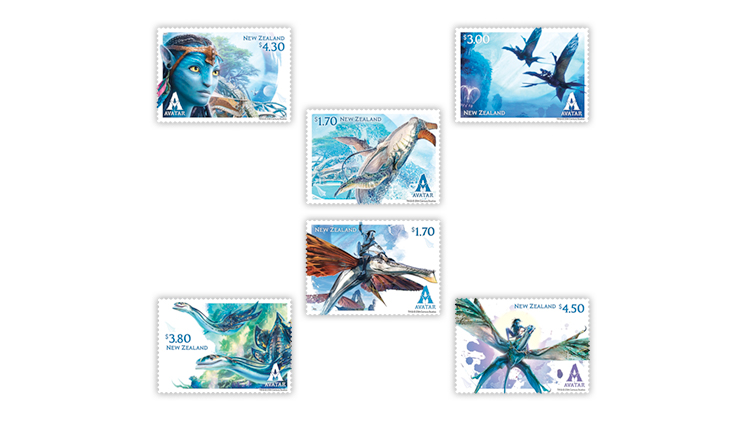 New Zealand will commemorate the 2022 science fiction film Avatar: The Way of Water with a set of six stamps to be issued March 1. The creatures referred to as mountain banshee are shown with riders on the $3 stamp from the set.

New Zealand’s post office, NZ Post, will issue six stamps March 1 to commemorate the 2022 science fiction film Avatar: The Way of Water, which was shot in a number of locations around the country.

The six stamps in the set depict the humanoid characters and imaginative creatures who populate the Avatar film franchise’s universe.

The first film in the series, 2009’s wildly popular Avatar, became the first film to earn over $2 billion worldwide and is now the highest-grossing film of all time worldwide.

Avatar: The Way of Water reached a spot as one of the top 10 highest-grossing films of all time worldwide less than a month after its Dec. 16, 2022, theatrical release in the United States.

Avatar takes place on the habitable moon Pandora, where human colonizers seeking to mine the valuable mineral unobtanium threaten the livelihoods of the Na’vi, an indigenous humanoid species.

“Pandora is what Earth once was: a pristine world unsullied by technology and the ravages of industry,” NZ Post said.

For the second movie, director James Cameron and producer Jon Landau depicted this pristine world by shooting in a number of locations around New Zealand.

Set more than a decade after the first movie, Avatar: The Way of Water follows many of the original characters as they again try to repel an invasion by human colonizers. In this instance, the characters take refuge with an oceanic Metkayina clan.

Jake Sully, the protagonist in both Avatar movies, appears on a $1.70 stamp in the set of six. The stamp shows him riding a skimwing, described by NZ Post as “a creature that the Metkayina and other reef clans use to hunt and ride into battle.”

A $4.30 stamp depicts Neytiri, who served as Sully’s teacher before the two fell in love in the first movie. The sequel presents Neytiri more than a decade later as the mother of three biological children and one adopted child. NZ Post calls Neytiri “one of the most fierce and powerful warriors of the Omatikaya Clan.”

While the previously mentioned $1.70 stamp shows Sully riding an aquatic creature, the original Avatar highlighted the connection between the Na’vi and aerial creatures. A $3 stamp shows riders on two mountain banshees, which are “large aerial predators that are native to Pandora,” according to NZ Post.

“The bonding between banshee and Na’vi is a dangerous rite of passage, but once achieved it allows the creature and rider to fly effortlessly through the Pandoran skies,” the postal agency said.

The $4.50 stamp shows a rider on a similar creature. In the description of this stamp design, NZ Post explained that the Sully family traveled thousands of miles from their rainforest home “to seek shelter and safe harbour in the distant atolls of Pandora.”

In this new environment, the characters establish bonds with new kinds of creatures. A second $1.70 stamp in the set shows a large, intelligent whalelike creature called a tulkun. NZ Post said that the Metkayina clan shares a deep spiritual bond with these creatures.

A $3.80 stamp depicts Ilu, described by NZ Post as “sleek, aquatic, plesiosaur-like creatures with long necks, six flippers and rudder-like tails.” The Na’vi use these aquatic mounts primarily for travel and hunting, the postal agency said.

Chris Jones of Graphetti Ltd. designed and illustrated the stamps. They were printed by Southern Colour Print Ltd by offset lithography.

The stamps measure 35.71 millimeters by 50mm each and are perforated gauge 14.4 by 14. In addition to the set of six, the stamps will be available in individual panes of 20 and in souvenir sheets of one.

NZ Post offers a presentation pack with artwork from the film along with information about the story, characters and filmmaking process. The presentation pack includes all six souvenir sheets and a first-day cover franked with all six stamps.

NZ Post also has FDCs for each souvenir sheet. The postmark for all of the FDCs gives the name of the movie in the same design used on posters and promotional items from the studio.

The stamps and other related materials can be ordered from NZ Post’s website. In addition to the website, ordering information is available from NZ Post Collectables, Private Bag 3001, Whanganui Mail Centre, Wanganui, New Zealand.