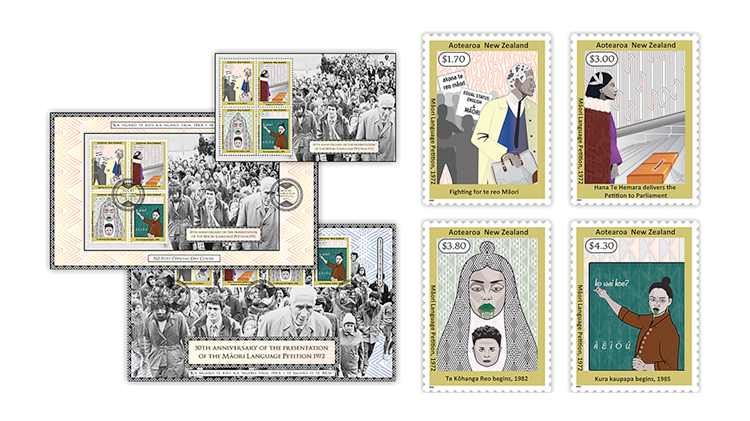 Image from a July 10 New Zealand Post email to philatelic customers that shows the four Maori Language Petition 50th Anniversary stamps, a souvenir sheet and first-day covers of both.

In announcing the stamp issue in July, New Zealand post explained the subject: “For most of the 20th century, New Zealand’s governments discouraged and banned people from speaking openly in the Māori language (te reo Māori). Then 50 years ago, te reo champions calling for it to be taught in schools presented a Māori language petition to Parliament.”

Then, on Aug. 2, Linn’s received an email sent by the NZ Post Collectibles team to its customers that explained the surprise withdrawal from sale:

“This decision has been made following additional feedback from key stakeholders that was received after products were printed.

“While extensive consultation took place in the development of the designs, some expectations were not met and as a result the stamps cannot be issued in their current form or on the planned date.”

This is the second Maori stamp issue in the past 20 years that New Zealand has removed from sale before issuance. In June 2006, a Traditional Maori Performing Arts set of five stamps was prepared but not issued. Examples of those stamps did get into collector hands, but according to the Scott catalog, there is no evidence that they were sold over post office counters.

Back in 1996, New Zealand also withdrew from sale two Children’s Health semipostal stamps with the same design (Scott B154-B155) because the image shows a child improperly belted into the vehicle. Those stamps were sold at post offices and command sizeable Scott catalog values of $1,000 unused and $1,750 unused, respectively.