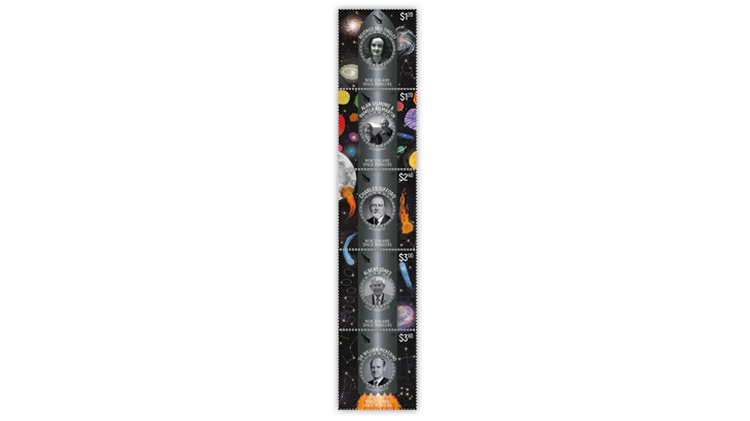 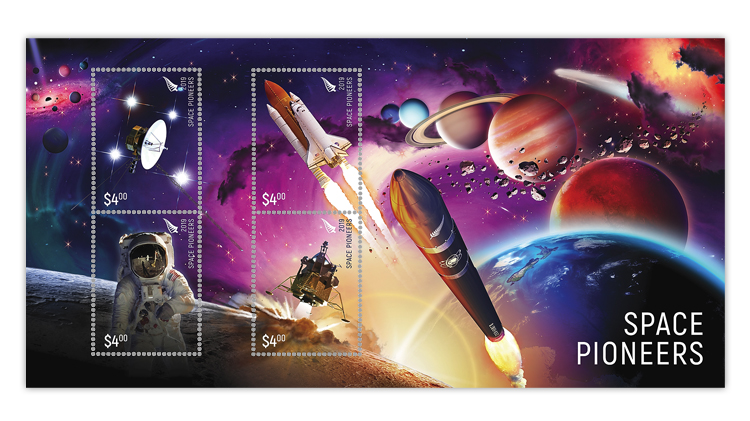 A 3D lenticular souvenir sheet from New Zealand commemorates the 50th anniversary of the first manned moon landing and other achievements in space exploration. The sheet includes four commemorative stamps.
Previous
Next

New Zealand Post is honoring the country’s space pioneers on stamps that are “dusted with a sprinkling of crushed meteorite, to make them truly out of this world!” The five stamps will be issued May 1.

Also, the 50th anniversary of the first manned moon landing will be among the U.S. space achievements recognized on a souvenir sheet issued at the same time. This sheet was printed with what New Zealand Post calls a mesmerizing lenticular 3D effect.

The five New Zealand Space Pioneers stamps are se-tenant (joined together) in a vertical strip to form a composite design of a rocket about to lift off.

The nose cone of the rocket is shown on the top stamp, a $1.20 domestic-rate stamp honoring Beatrice Hill Tinsley (1941-81). In its “Overlooked” series of obituaries, The New York Times called her the “world’s leading expert on the aging and evolution of galaxies.”

Born in England, Tinsley immigrated with her family to New Zealand after World War II. In 1963, she moved with her husband, physicist Brian Tinsley, to Dallas, Texas. She became the first female professor of astronomy at Yale University in 1978.

On the stamp, a photographic portrait of Tinsley is shown on the rocket fragment. Her name is inscribed above the portrait and the one-word description “cosmologist” below.

According to New Zealand Post, the meteor dust is affixed around the portrait. The dust appears as gray dots in the publicity image of the se-tenant stamps shown nearby.

The next stamp, another $1.20 denomination, commemorates Alan Gilmore and Pamela Kilmartin as the discoverers of 41 minor planets. A minor planet this husband and wife team discovered in 1981 is named after Tinsley.

The $2.40 stamp in the middle of the strip of five honors Charles Gifford (1861-1948) as “New Zealand’s most outstanding astronomer in the first half of the 20th century.” New Zealand Post also said, “Using mathematics, he showed that the Moon’s craters were made by meteorite impact.”

An amateur astronomer, Jones built his own telescope in 1948, eventually looking at more than 500,000 stars. Among his discoveries or co-discoveries were two comets and a supernova. He was awarded the Order of the British Empire by Queen Elizabeth II for his services to astronomy.

The final stamp, a $3.60 denomination, shows the bottom of the rocket surrounded by flames at liftoff and honors rocket scientist William Pickering (1910-2004).

Born in Wellington, New Zealand, Pickering immigrated to the United States in 1929, becoming a citizen in 1941. He served as director of the Jet Propulsion Laboratory in Pasadena, Calif., from 1954-76.

“Dr. Pickering was one of the titans of our nation’s space program, Charles Elachi, director of the Jet Propulsion Laboratory from 2001-16, said in the announcement of Pickering’s death. “It was his leadership that took America into space and opened up the moon and planets to the world.”

The two bottom stamps are related to the moon landing. The stamp on the left depicts the first moon walk on July 20, 1969. Like one of the two forever stamps to be issued July 19 by the U.S. Postal Service, the design is based on a photograph of astronaut Buzz Aldrin taken by Neil Armstong.

New Zealand Post describes the stamp in the lower right as showing “the lightweight craft Apollo Lunar Module, used to transport astronauts to the Moon’s surface.”

New Zealand Post describes the selvage of the sheet as showing “the Solar System, a comet, nebula and the galaxy with exoplanets, and New Zealand’s history-making Electron rocket by Rocket Lab.”

Southern Colour Print of Dunedin, New Zealand, printed the five New Zealand Pioneers of Space stamps in sheets of 25. According to New Zealand Post, they were printed by lithography with “four process colours plus ground meteor dust applied to overgloss.” Hannah Fortune of New Zealand Post designed the stamps.

New Zealand Post isn’t the first postal administration to use meteor dust on a stamp. In 2006, Austria issued a souvenir sheet with a single €3.75 stamp with embedded meteorite particles (Scott 2042).

Norway also included meteorite dust on the two Europa stamps in its 2009 souvenir sheet commemorating the International Year of Astronomy (Scott 1585a).