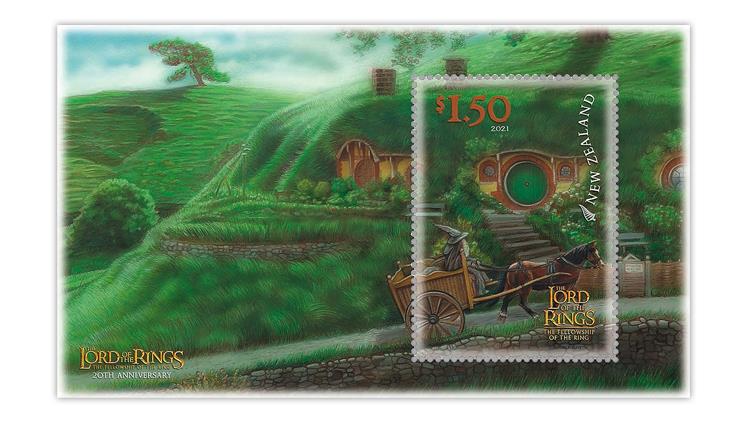 NZ Post, the government-owned postal service of New Zealand, will issue a set of stamps Sept. 1 to mark the 20th anniversary of the beginning of Peter Jackson’s film trilogy The Lord of the Rings. This souvenir sheet of one $1.50 stamp shows the wizard Ga 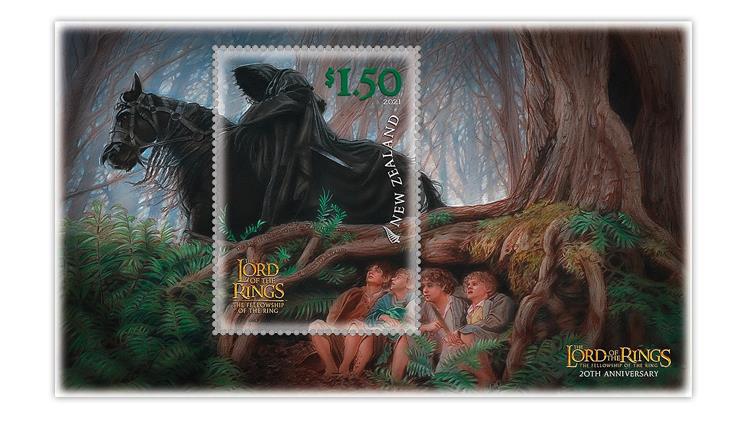 Hiding from one of Mordor’s black riders, the four hobbits crouch under tree roots on this $1.50 souvenir sheet. Stamps are also sold in panes of 25. 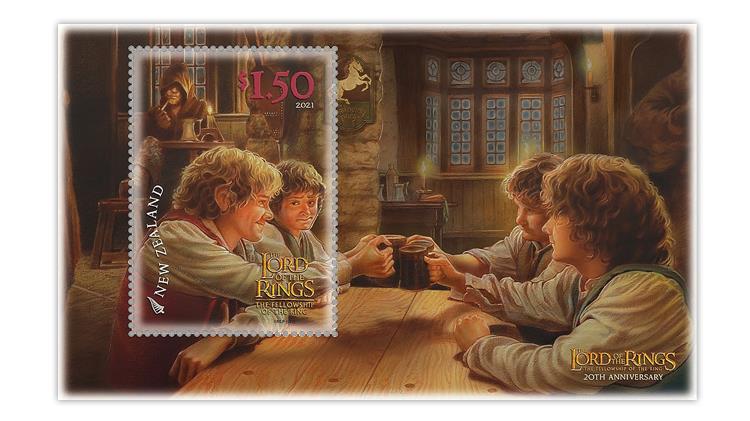 This $1.50 souvenir sheet shows the hobbits at the Prancing Pony, watched over by Aragorn, the mysterious Ranger of the North. 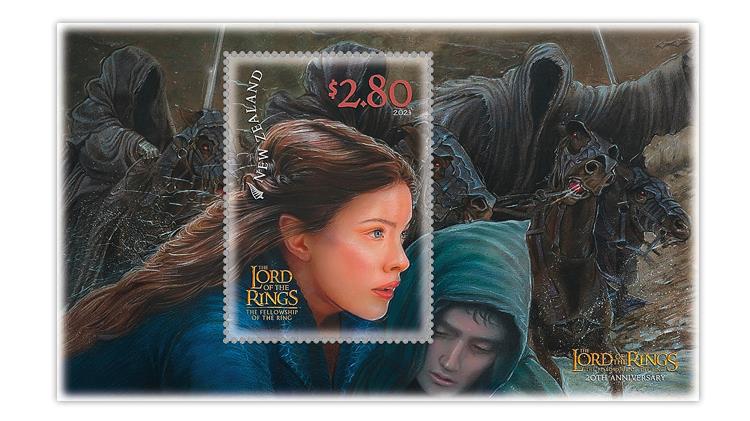 After Frodo is stabbed, he is taken on horseback by the elven princess Arwen, who seeks help to heal him. The stamp has a $2.80 denomination. 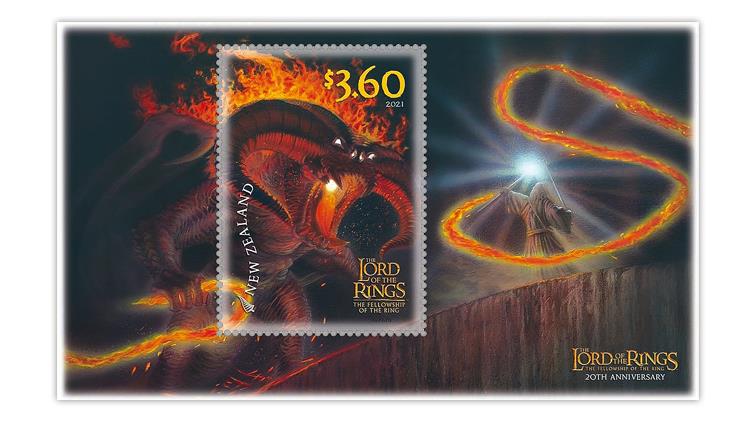 On the $3.60 souvenir sheet, at the Bridge of Khazad-dum, Gandalf challenges the deadly Balrog, shouting “You shall not pass!” 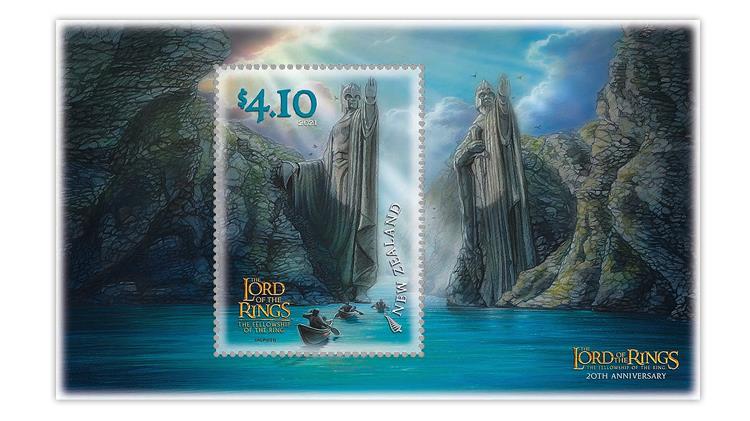 The gigantic stone statues of the Gates of Argonath are the backdrop on this $4.10 souvenir sheet showing the fellowship on the River Anduin.
Previous
Next

In time for the 20th anniversary of The Lord of the Rings: The Fellowship of the Ring, the first film in director Peter Jackson’s epic trilogy, NZ Post (the state-owned postal service of New Zealand) is issuing six new stamps, souvenir sheets and additional products to commemorate the 2001 beginning of the popular movie series.

The new stamps will be introduced Sept. 1.

They are the latest NZ Post tribute to J.R.R. Tolkien’s extended fantasy tale, which Jackson transformed into a live-action adventure that was filmed in the island nation.

The new 20th anniversary set features original paintings by Wellington artist Sacha Lees, who was an illustrator, sculptor and concept artist on the Jackson films.

The new set is being offered as six single stamps in panes of 25 and in souvenir sheets of one with a decorative border that extends the scene on the stamp.

The souvenir sheets pictured with this article are shown courtesy of NZ Post.

Lees’ artwork reproduces key moments from the first film in the series, titled and described by NZ Post as follows.

“$1.50 The Journey Begins — In the region of The Shire, the village Hobbiton is home to hobbits Bilbo and Frodo Baggins. Scenes here were filmed near Matamata on the private Alexander Farm, whose rolling hills provided an idyllic backdrop. This souvenir sheet features the iconic shot of Gandalf as he rides up to meet Bilbo at Bag End.

“$1.50 Hiding from the Black Rider — Frodo and Sam have set out on what will become an arduous mission to destroy the One Ring. Taking cover in a hollow among the roots of a tree, the hobbits evade an envoy of Mordor. Surprisingly, this forested scene was filmed not in a remote location but in Wellington city’s Town Belt.

“$1.50 The Prancing Pony — Frodo and his hobbit friends Sam, Pippin and Merry drink ale at the Prancing Pony in Bree, where they first meet Aragorn. The Bree scenes were filmed at former army camp Fort Dorset in Seatoun, Wellington.

“$2.80 Flight to the Ford — After Frodo is stabbed by a Black Rider, Arwen the elven princess gallops with him on her horse through a prairie and a wood to the safety of a river. The thrilling scene was filmed at the Shotover River which flows through the rocky gorge Skippers Canyon, near Queenstown.

“$3.60 The Bridge of Khazad-dum — Perhaps the movie’s most theatrical moment takes place in subterranean labyrinth the Mines of Moria, where Gandalf turns and cries ‘You shall not pass’ to the fire-breathing Balrog.

“$4.10 The Gates of Argonath — Journeying along the River Anduin in three boats, the Fellowship passes two gigantic stone statues guarding the northern border of Gondor. This epic scene was filmed in the Kawarau Gorge and Kawarau River near Queenstown.”

Though his face cannot be seen in the painting, the character of Gandalf on the $1.50 The Journey Begins stamp was portrayed by actor Ian McKellen.

On the $1.50 Hiding from the Black Rider stamp, the hobbits Frodo and Pippin are seen in the lower right corner of the stamp, while Sam and Merry can be seen near them in the souvenir sheet selvage. Actor Elijah Wood was cast as Frodo, and Billy Boyd played Pippin. Sean Astin was Sam in the films, and Dominic Monaghan was Merry.

Merry and Frodo appear together on the $1.50 The Prancing Pony stamp, while the mysterious Ranger of the North, Aragorn (portrayed in the film by Viggo Mortensen), looks on from the shadows. Sam and Pippin are also seen again in the souvenir sheet selvage.

The $2.80 Flight to the Ford stamp shows the face of Arwen (portrayed by Liv Tyler) as she carries the stricken Frodo on horseback. Frodo’s deathly pale visage is seen on the souvenir sheet selvage.

The $3.60 The Bridge of Khazad-dum souvenir sheet shows the wizard Gandalf in the selvage, challenging the deadly Balrog, whose fiery figure takes up the single stamp.

The $4.10 The Gates of Argonath stamp has a distant image of the fellowship in small boats approaching the enormous guardian statues on the River Anduin.

Along with the denomination, each stamp includes the inscription “The Lord of the Rings” in gold, and “The Fellowship of the Ring” in smaller letters.

The country name “New Zealand” is also on each stamp, as is the small silver fern emblem representing the nation.

Along with painting the illustrations for these new stamps, Lees also designed New Zealand Post’s first set of The Lord of the Rings postage stamps (Scott 1750-1761), which were issued just days before the December 2001 debut of the first film in the trilogy.

NZ Post also issued related stamps in 2012, 2013 and 2014 for Jackson’s later prequel trilogy of films based on Tolkien’s book The Hobbit. Principal filming for those movies also took place in New Zealand.

Single stamps, souvenir sheets and various sets can be ordered from NZ Post, and will be offered by many dealers in worldwide new issues.