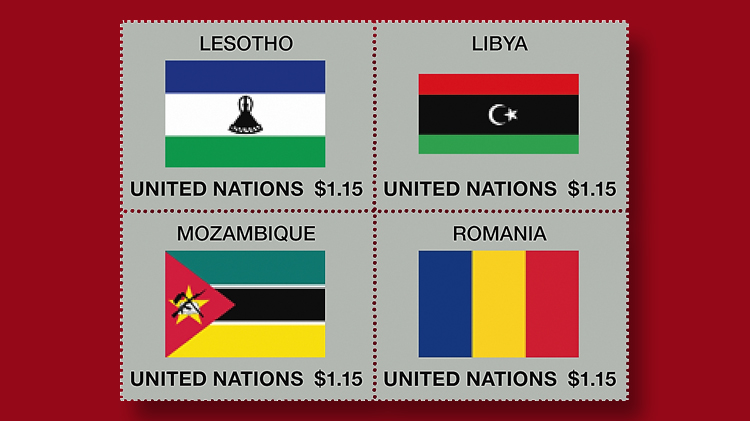 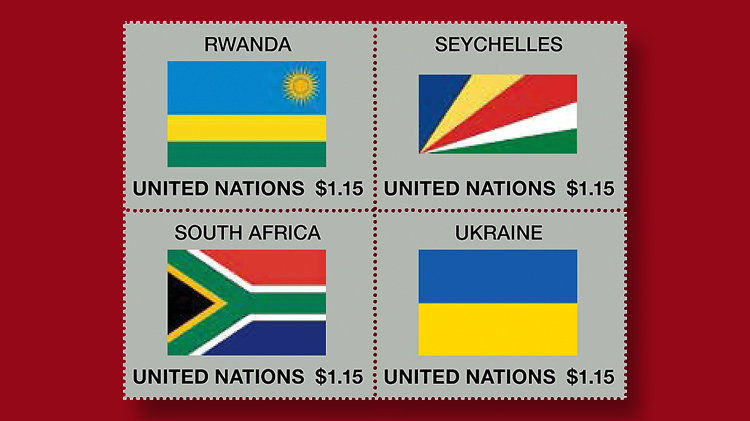 The new Flag stamps are issued in two panes of 16 stamps, with each pane featuring four different designs. Flags of Rwanda, Seychelles, South Africa and Ukraine are depicted on these four stamps.
Previous
Next

Eight new stamps in the long-running Flag series from the United Nations will be issued Jan. 12.

The stamps will be issued in two panes of 16 stamps, with four designs in each pane.

The stamps are denominated $1.15 for use at U.N. headquarters in New York City. The postage value fulfills the rate for international first-class letter mail weighing one ounce or less.

When the program began, the UNPA issued 16 Flag stamps every year until 1989, so that all U.N. member nations had been represented with images of their national flags.

Beginning in 1997, additional stamps were issued in the series as new member states joined the United Nations, or after changes were made to a country’s flag or its official member name.

In the case of this upcoming issue, the eight stamps all represent nations previously acknowledged in the stamp series, but which have since seen the designs of their national flags change significantly.

Each stamp shows the flag in its entirety on a neutral gray background.

One pane in the new issue is printed with four stamps each displaying the respective flags of Lesotho, Libya, Mozambique and Romania. The flags of Rwanda, Seychelles, South Africa and Ukraine are shown on the other pane.

The stamps are arranged in blocks of four on each pane of 16. The center block of four, therefore, includes one each of the four stamps.

Margin selvage surrounds the 16-stamp block, with a small blue imprint appearing twice in the upper and lower margins; one imprint appears adjoining each block of four. The imprint shows a fluttering U.N. flag with the text “FLAG SERIES.”

The UNPA graphic design team designed the stamp panes. The stamps were offset-printed by Lowe-Martin Co. of Canada in quantities of 22,000 of each pane. The stamps measure 40 millimeters by 30mm and are perforated gauge 13.3.

Lesotho, a landlocked south African kingdom slightly larger than the state of Hawaii, redesigned its flag in 2005 and adopted the new design the following year as the country celebrated its 40th anniversary of independence from the United Kingdom.

The flag shows three horizontal stripes in solid blue, white and green. Centered in the white stripe is the black design of a mokorotlo, the traditional straw hat that serves as a national symbol.

Libya’s flag also consists of three horizontal stripes, but in red, black and green. Centered in the black stripe is a white crescent and five-pointed star.

This design previously served as Libya’s flag from 1951 to 1969, but three different flag designs followed before the current flag was reinstated in 2011.

The flag of Mozambique underwent a change in 1983, shortly after the original United Nations 20¢ Mozambique Flag stamp was issued the previous year (Scott 378).

The current flag design includes three horizontal stripes in green, black and yellow separated by thin white stripes known as fimbriations. A red triangle on the hoist side includes within it a gold star, an open book, and the crossed symbols of a hoe and a rifle with bayonet.

The colors of blue, yellow and red were present on the flag of Romania in the 19th century, even before the current design of three vertical stripes was in use from 1866 to 1948.

Variations during the era of Communist rule showed emblems within the center stripe. The return to the earlier design was completed in 1989.

The flag of Rwanda shows three horizontal stripes with a larger blue field at top, yellow in the center and green at bottom. A sun with rays extending in the blue field is printed in a slightly different shade of yellow than the central stripe.

Rwanda is a small landlocked and mountainous country in central Africa. The current flag of Rwanda was adopted in 2001.

Seychelles, a small archipelago nation in the Indian Ocean, adopted a new flag design in 1996, with five oblique stripes radiating from the lower corner of the flag’s hoist side.

The stripes, from upper left, are blue, yellow, red, white and green.

South Africa’s flag became the national symbol in 1994 following the end of the apartheid era. The flag represents themes of convergence and unification, with colors described as black, gold, green, white, chilli red and blue.

The angled arms of a green Y-shaped band begin at the top and bottom corners of the hoist side and join in the center of the design where they continue together as a single horizontal stripe to the middle of the free edge.

The flag of Ukraine today is another traditional design returned to national usage in 1992. It consists of two horizontal stripes of equal size: blue at top and yellow below.

The eight new stamps bring the total number of face-different stamps in the United Nations Flag series to 220.

The most recent issue in the series prior to this new group came less than one year ago on Feb. 3, 2017. That two-pane issue consisted of eight $1.15 stamps showing flags of Albania, Benin, Bulgaria, Comoros, Congo Republic, Ethiopia, Georgia and Iraq (Scott 1150-1157).