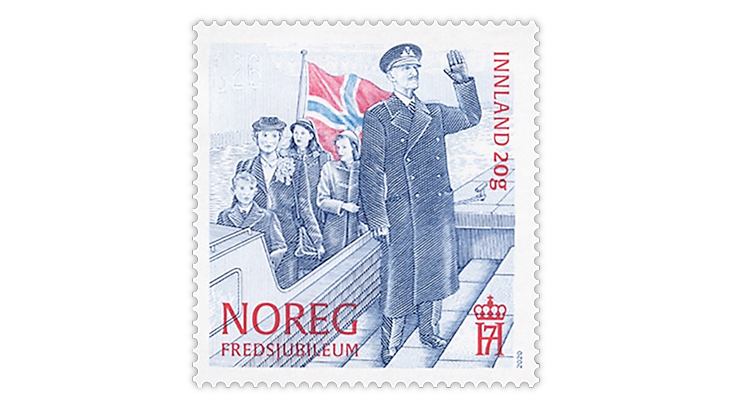 Norway will issue a souvenir sheet in 2021 to celebrate the 200th anniversary of its flag. The flag is shown flying in the background on this stamp issued May 8, 2020, to celebrate 75 years of peace.

Norway’s post office, Posten, announced its 2021 stamp program in the most recent issue of Norway Post Stamps (No. 5, 2020), its bulletin for stamp collectors.

The program will begin Feb. 19 with two stamps in its Polar series, which was introduced in 2018. The 2021 stamps in the series will feature Peter I Island, a remote, uninhabited island about 250 miles from the continent of Antarctica.

The island was discovered in 1821 by Russian explorer Fabian von Bellingshausen, who named it after Czar Peter I. However, that explorer did not land on the island. It was more than 100 years later, in 1929, when Norwegian explorers Nils Larsen and Ola Olstad landed on the island and claimed it for Norway.

Also to be issued Feb. 19 will be stamps marking the 200th anniversaries of three cities: Larvik, Lillesand and Tonsberg.

Stamps slated to be released April 3 will include two booklet stamps commemorating the 100th anniversary of the Dovre Railway Line that runs between Oslo and Trondheim and two sheet stamps highlighting endangered national wildlife.

On Oct. 2, Posten will issue a set of four coil stamps depicting mopeds and motorcycles, and a new set in its Research, Innovation, Technology series.

Concluding the program on Nov. 5 will be two Christmas stamps and a souvenir sheet celebrating the 200th anniversary of Norway’s flag.

Frederik Meltzer designed the red, white and blue flag with a cross, which was adopted in 1821.

The flag also was included on Norway's stamp issued May 8, 2020, to celebrate 75 years of peace. Designed by Martin Morck, it shows King Haakon arriving in Oslo on June 7, 1945.

Posten reports that its 2021 program is tentative and subject to change.