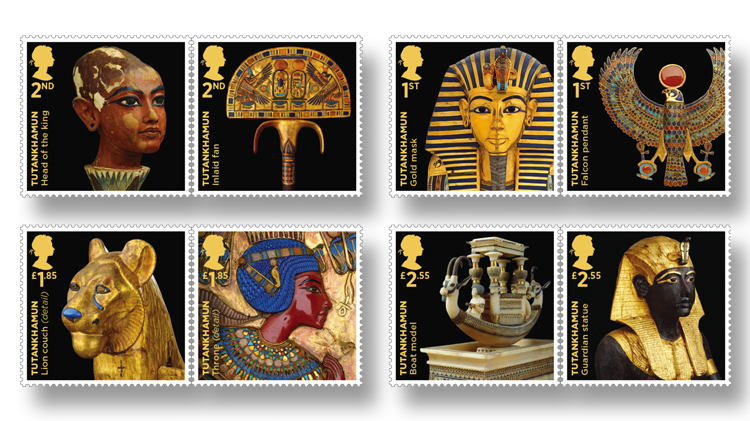 Great Britain’s Royal Mail commemorates the 100th anniversary of Howard Carter’s discovery of Tutankhamun’s tomb with stamps issued Nov. 24. Each stamp shows an artifact from the tomb. Gold text on the left side of the designs identifies the artifacts.

“The remarkable discovery has shaped historians’ understanding of the religion, rituals and culture of ancient Egypt to this day,” Royal Mail said.

Each stamp in the set of eight shows a different artifact. Gold text on the left side of the designs identifies the artifacts, and the upper left corner of each stamp presents the denomination and the silhouette of Queen Elizabeth II.

As reported in the Oct. 17 issue of Linn’s, Royal Mail said in a Sept. 27 announcement that it plans to exhaust existing stocks of stamps before issuing stamps with the image of King Charles III.

The second-class stamps feature the head of the king and an inlaid fan, respectively, while the first-class stamps show a gold mask and a falcon pendant.

The £1.85 stamps picture close-ups of details of a lion couch and a throne, respectively. The £2.55 stamp shows a boat model, and the other depicts a guardian statue.

In a filler card included in first-day covers offered for this stamp issue, Royal Mail explains that the artifacts pictured comprise just a small fraction of the 5,000 objects found in the tomb, which took 10 years to clear, document and conserve.

The Grand Egyptian Museum in Cairo now houses these artifacts, and the excavation documentation is in ...