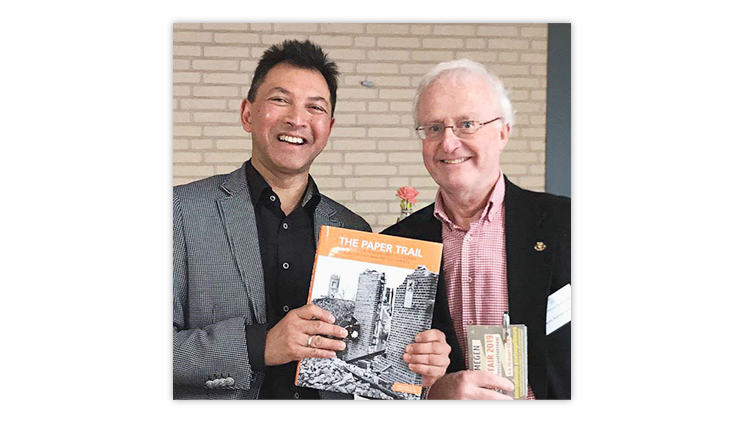 Kees Adema, right, and Jeffrey Groeneveld are co-authors of The Paper Trail: World War II in Holland and Its Colonies as Seen Through Mail and Documents. On Nov. 6, they delivered the 16th Maynard Sundman lecture, titled “World War II Postal History and I

In their joint presentation, Adema and Groeneveld argued that postal history can help confirm that debated historical events actually happened.

As Adema put it: “These are fascinating times for postal history, which used to be the stepchild of philately. No more.”

Citing their co-authored book, The Paper Trail: World War II in Holland and Its Colonies as Seen Through Mail and Documents, Adema and Groeneveld said postal history can help prove the Nazi concentration camps and other aspects of the war existed.

“By writing about war, we made a statement about peace,” Adema said.

Adema’s family lived in the Dutch village of Arnhem, which was looted by the Germans during the Nazi occupation. He recalled family and friends who perished in the war.

Groeneveld was in the Dutch East Indies during the Japanese invasion, and he could also recall the horrors his family knew. His father, a railroad engineer, avoided death because the Nazis were so in need of trainmen that they let him live.

The two collectors used a digital presentation to illustrate how they could use mail to document the war’s impact.

An airmail cover flown by one of the Pan Am Clippers survived, Adema said, only because the pilot received permission to fly to Honolulu late on the morning of the Dec. 7, 1941, Pearl Harbor attack. Had the pilot made the flight on time, the plane would have been shot down in the Japanese assault, he said.

Adema also displayed a letter showing a Rembrandt painting that Hitler so desperately wanted that the Nazis let several relatives of two art dealers out of concentration camps.

Adema is described on the National Postal Museum’s website as “an internationally known postal historian and author with five books and some 75 articles and papers to his credit.”

Groeneveld, a respected postal historian in the Netherlands, “has regularly written for Dutch philatelic magazines on a variety of subjects for more than 35 years,” according to the museum.