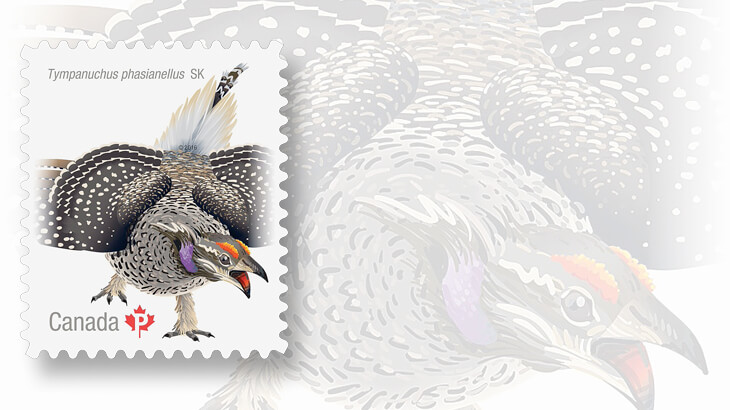 While the other stamps show birds in flight, this one for the official bird of Saskatchewan shows an aggressive male sharp-tailed grouse strutting his stuff in his annual spring mating display. 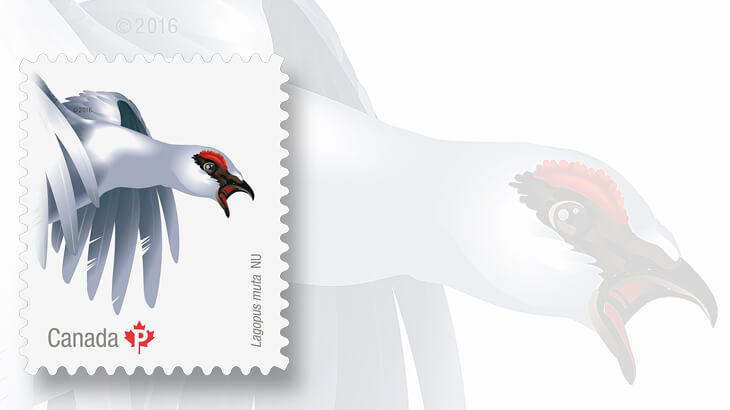 The most recent of Canada’s official birds, the rock ptarmigan was selected by the legislative assembly as a symbol of Nunavut Territory in 2011. 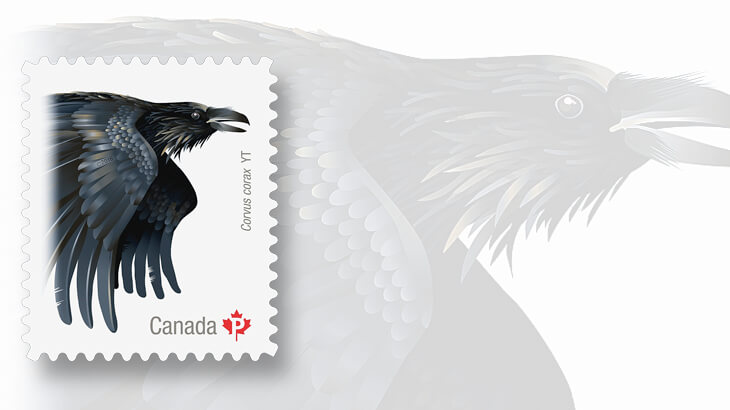 Representing Canada’s Yukon Territory, a common raven sounds its shrill alarm as it wings its way across this booklet stamp. 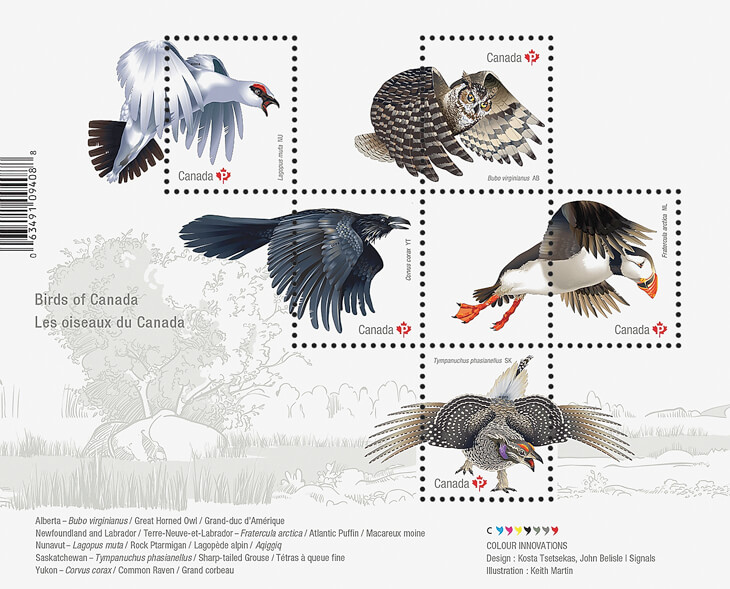 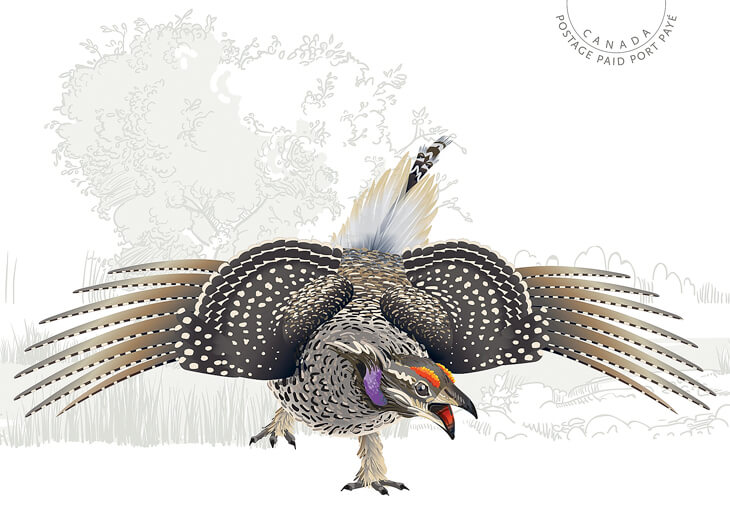 Sold in sets of five, nondenominated Official Birds of Canada picture postal cards pay the international rate and can be used to any destination Canada Post reaches. The cards reproduce the complete bird paintings from which the stamps were taken, with a 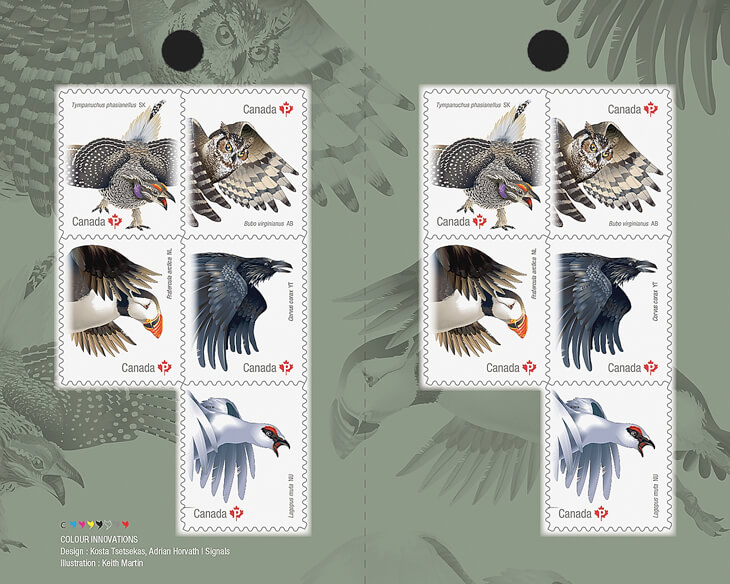 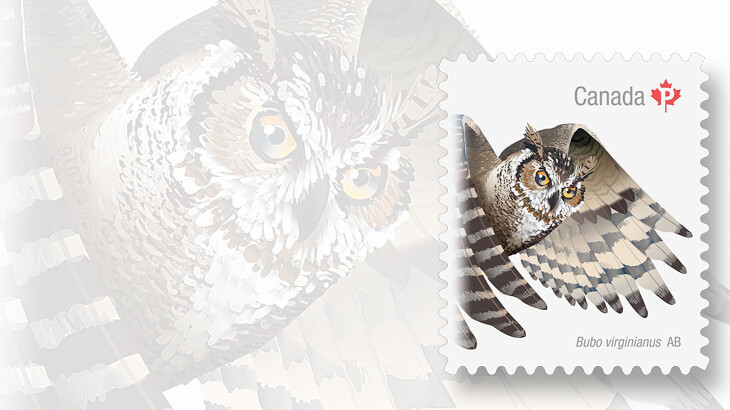 The great horned owl, the official bird of Alberta, swoops silently on the hunt. This self-adhesive booklet stamp also is part of a series of 15 to be issued in annual installments over the next three years. 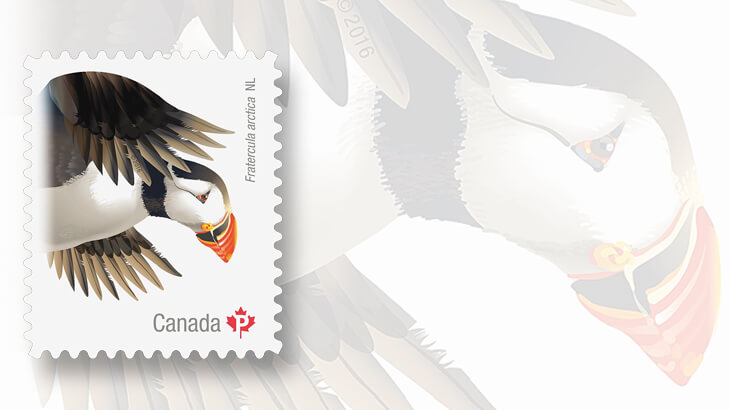 The official bird of Newfoundland and Labrador, the colorful Atlantic puffin is shown on one of five new permanent-rate (85¢) Canadian Bird stamps to be issued July 12.
Previous
Next

On July 12, Canada Post will issue the first installment in a three-year series celebrating the official birds of Canada’s provinces and territories.

The first five stamps in the series were given wings by design manager Susan Gilson, designer Kosta Tsetsekas, and senior illustrator Keith Martin of Vancouver’s Signals Design Group, which has been designing Canadian stamps since at least 2009.

To help create the series, Martin learned about the birds, their physicality, characteristics, and distinctive individual details, with special attention to how they would be depicted on the stamps.

“I didn’t want the birds to appear passive,” he said in Canada Post’s Details magazine of his decision to picture them at their most energetic. “Takeoffs and landings were my opportunities.”

Designer Tsetsekas saw a key part of his role as making sure that the finished stamps focused squarely on Martin’s detailed artwork.

“We didn’t want to add elements to the stamps that could detract from the birds,” he explained, accounting for the absence of customary stamp design elements such as background illustration and elaborate frames on these striking stamps.

The stark white background sets the birds off to maximum advantage.

The Atlantic puffin, the Atlantic Ocean’s only native puffin, is the official bird of Newfoundland and Labrador, which share almost 11 thousand miles of coastline. A small bird with a large, colorful bill, the Atlantic puffin can fly at up to 55 miles per hour, and is an adept diver for fish.

This puffin is very much at home in clifftop colonies, where nesting pairs incubate, hatch, and raise a single chick each year.

The stamp portrays a puffin taking off from a nesting colony.

The great horned owl, a majestic raptor with its signature ear tufts and penetrating glare, was chosen by children throughout the province of Alberta as its official bird in 1997.

Found throughout Alberta’s southern grasslands and boreal forests, the great horned owl is an efficient predator at home throughout most of North America south of the treeline. It is also known as the hoot owl for its distinctive call.

The stamp shows a hunting owl in flight with its ear tufts raised.

The official bird of the Yukon Territory since 1986, the common raven is a clever and familiar character in the folk tales of many of Canada’s native peoples, often humorously outsmarting those who seek to outsmart him.

Larger and heavier than its cousin the crow, ravens are problem-solving, opportunistic omnivores that make the most of whatever food they can find, much as some eagles do.

The stamp portrays a raven vocalizing while in flight.

The most recent of Canada’s official birds, the rock ptarmigan was selected by the legislative assembly of Nunavut Territory in 2011. (This relative of the grouse also is the official game bird of Newfoundland and Labrador.)

The rock ptarmigan is well-suited to year-round life in Canada’s least populous and most remote territory, living on seeds, buds, and foliage of seasonal plants in similar arctic, subarctic, and mountainous northern terrain around the northern hemisphere.

The stamp features an aggressive male rock ptarmigan in breeding plumage, with enlarged red combs above the eye.

A year-round resident in all but extreme northeast Saskatchewan, the sharp-tailed grouse has been its official bird since 1945, and is referred to by the provincial government as “one of Saskatchewan’s most popular game birds.”

It is best known for dramatic displays males put on each spring at flat, close-cropped patches of prairie called leks, where up to 20 males strut their stuff for the prospective mates in an elaborate dance that sometimes turns violent.

The male on the new stamp shows an aggressive part of that display.

Martin believes that “all of the character — as with any animal — is in the face.”

However, he also said he enjoyed creating more complete illustrations on the stamps in the larger souvenir sheet and on the picture postal cards.

“I wanted the whole illustration to reveal the rich patterns, colors and textures that come together to create the character and warmth of these birds,” he said.

With two more years of Official Birds of Canada to come, Tsetsekas can’t wait to see the remaining issues leave the nest.

“Before a single image was finalized, Keith and I worked together to plan each bird in the 15-stamp series,” he said, “So, naturally, we’re eager to see them take flight.”

Collectors may be eager to see what the 15th stamp could be. Canada has 10 provinces and three territories, and will announce and presumably commemorate its new national bird for the first time in 2017 — a total of only 14 stamps.

Perhaps the 15th stamp will be a return fly-by of the venerable Canada goose, the first bird to grace a stamp from Canada, on a 7¢ airmail issued 70 years ago this September (Scott C9).

The 20-millimeter by 24mm stamps were printed in seven-color offset lithography by Colour Innovations, and are believed to be the first Canadian stamps for this 25-year-old Toronto printing firm. The quantity printed was 400,000 10-stamp booklets. They are Canada Post order No. 414022111.

The issue also is available in perforated five-stamp souvenir sheets measuring 114mm by 92mm with moisture-activated PVA gum, order No. 404022145.

On the souvenir sheet, the complete body of each bird extends through the perforation and onto the selvage between stamps, rather than fading out at the edges of the stamp design as depicted on single stamps from the booklet.

The cancel image on Canada Post first-day covers shows a stylized bird in flight, and the cancellation site is Witless Bay, Newfoundland. It is the home of the Witless Bay Ecological Reserve, four islands that comprise North America’s largest Atlantic puffin colony.

More than half a million puffins and millions of other seabirds nest there during the late spring and summer each year.

Some 11,000 FDCs of the souvenir sheet have enlargements of the raven, owl, and grouse depicted on the stamp and a pale grayish background that ties the postage to the cover. Priced at $5.25, these are Canada Post item 404022144.

Nondenominated picture postal cards paying the international rate will be issued in 2,000 sets of five, each card displaying an image of the entire bird from which the stamp designs were taken. Canada Post order No. 262448, these are priced at $12.50 per set.

Canada has celebrated many remarkable women on its postage stamps