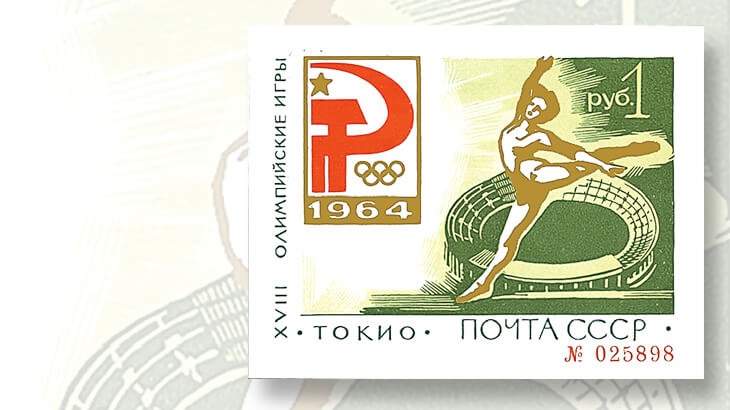 The Russian economy is in a state of flux. Having said that, there is still a lot of loose money banging around the Russian Federation waiting to be spent. Well-connected Russian businessmen, favored by the government, can live like kings. Some of that money finds its way into the stamp market.

The market for Russian stamps in some ways resembles the Chinese market in that some items are attractive to investors who aren’t necessarily collectors — at least not in the sense that we understand collecting as part of organized philately. The market for early Soviet-era stamps up to the 1940s remains solid, especially for mint never-hinged. Select later items are also in demand.

A bellwether for the Russia market is the 1964 1-ruble green Olympic Gymnast souvenir sheet of one. The souvenir sheet is not listed, but is noted and valued after Scott 2926.

The 2016 Scott Standard Postage Stamp Catalogue values the green souvenir sheet at $175 in mint never-hinged condition and at $225 canceled. A 1r red souvenir sheet with the same design also was issued, but it is not valuable.

We have seen the green souvenir sheet selling in mint never-hinged condition from $150 all the way up to $225. If you find it offered at Scott catalog value, it is a good buy.