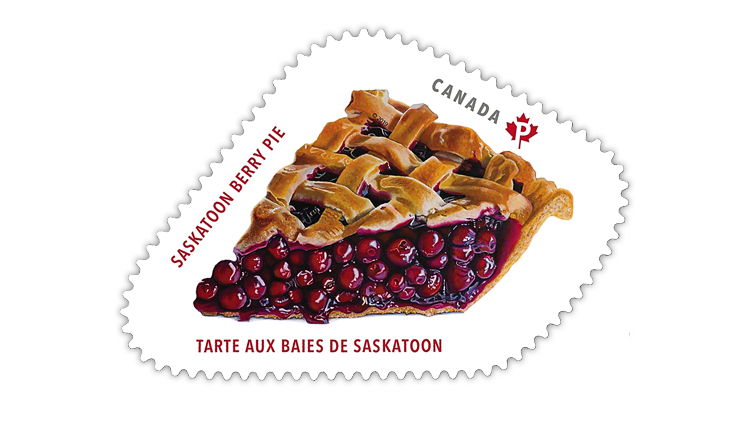 Canada Post is issuing five Sweet Canada stamps April 17. Each stamp is in the shape of the dessert it features. Saskatoon berry pie is made from berries that are said to taste like a mixture of almonds and apples. 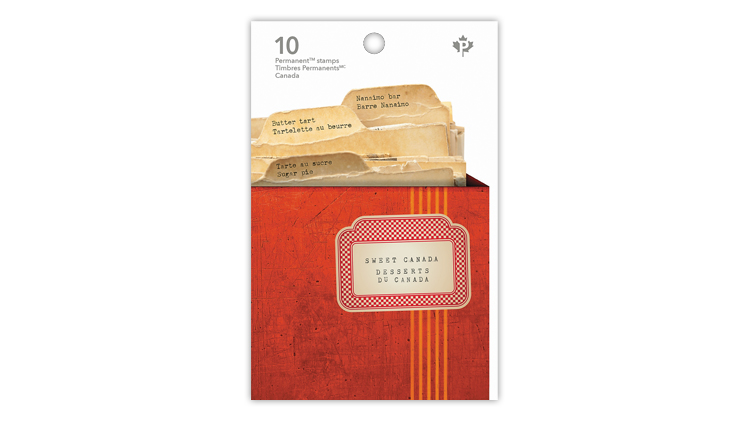 The cover of the Sweet Canada stamp booklet depicts a recipe box. 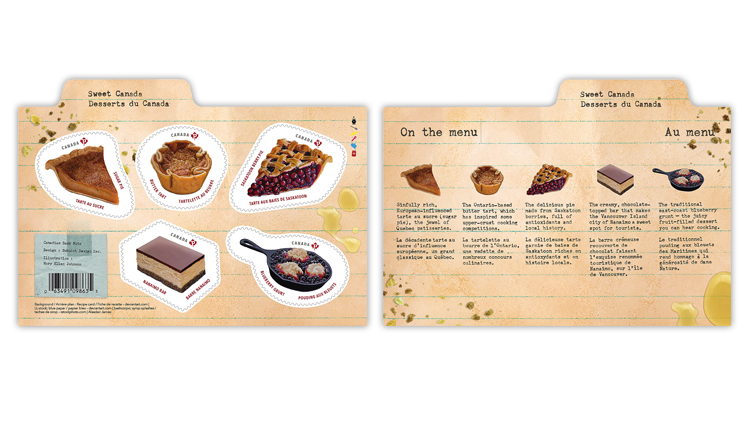 The Sweet Canada souvenir sheet was designed to resemble a recipe card that still has traces of the ingredients, including drops of maple syrup. Information about the five desserts shown on the stamps is provided on the reverse.
Previous
Next

A skillet-shaped stamp shows blueberry grunt. Merriam-Webster’s Collegiate Dictionary defines grunt as "a dessert made by dropping biscuit dough on top of boiling berries and steaming."

The April-June issue of Details, Canada Post’s magazine for collectors, says blueberry grunt "gets the name from the sound it makes as the blueberries bubble and steam under a dumpling topping."

A hexagonal stamp shows British Columbia’s Nanaimo bar, and a butter tart of Ontario is featured inside an irregular circle.

The Sweet Canada issue includes a booklet of 10 (two of each stamp) and a souvenir sheet of the five different stamps.

Both the booklet pane and the souvenir sheet are designed to resemble recipe cards, complete with a few splashes of maple syrup and traces of other ingredients on them.

On the recipe box pictured on the booklet cover, well-used recipe cards for sugar pie, butter tart and Nanaimo bar are partially pulled out.

All five stamps are nondenominated, paying the basic domestic letter rate (currently 90¢). Canada Post calls these permanent stamps, and they are identified with the letter "P" inside a symbolic maple leaf.

Canada Post said in its new-issue announcement in Details: "Working with designers Roy White and Liz Wurzinger of Vancouver’s Subplot Design Inc., illustrator Mary Ellen Johnson began her assignment in the kitchen, baking the five delectable desserts chosen for the stamps, photographing them, and then creating oil paintings of each. Subplot reinforced the culinary concept with a recipe card-inspired design that shows a truly satisfying slice of creativity."

The back of the souvenir sheet, which like the front has a recipe-card theme, includes a sentence (in English and French) about each dessert:

"The Ontario-based butter tart, which has inspired some upper-crust cooking competitions.

"The delicious pie made from Saskatoon berries, full of antioxidants and local history.

"The creamy, chocolate-topped bar that makes the Vancouver Island city of Nanaimo a sweet for tourists.

"The traditional east-coast blueberry grunt — the juicy fruit-filled dessert you can hear cooking."

Canadian Bank Note printed the stamps by six-color lithography. A total of 200,000 booklets of 10 were printed, and 80,000 souvenir sheets of five.