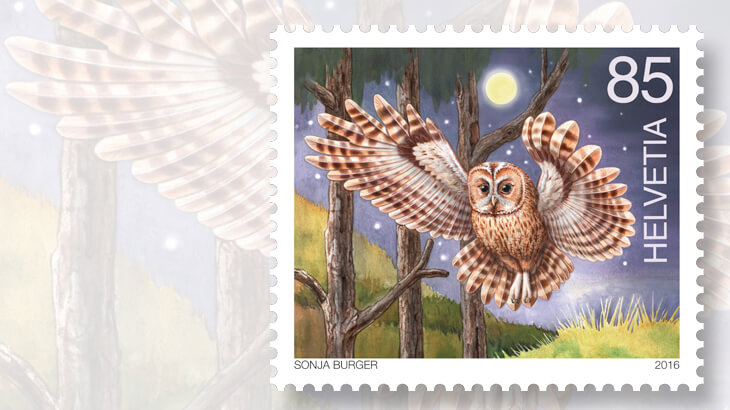 A stamp in Switzerland’s Nocturnal Animals set shows a tawny, or brown, owl flying during the full moon. 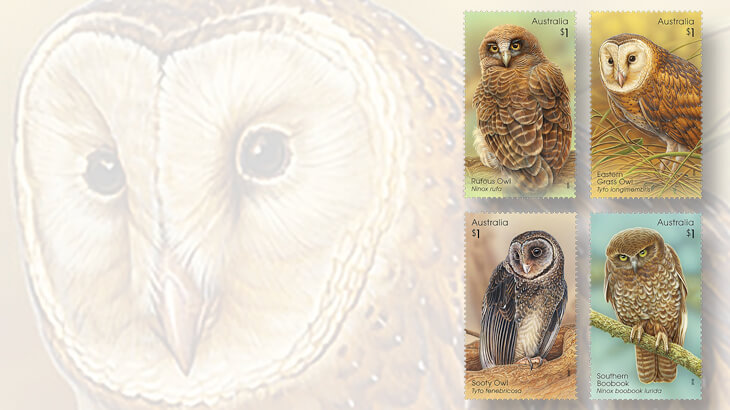 Australia’s new Owls: Guardians of the Night stamps depict the rufous owl, the eastern grass owl, the sooty owl and the southern boobook. 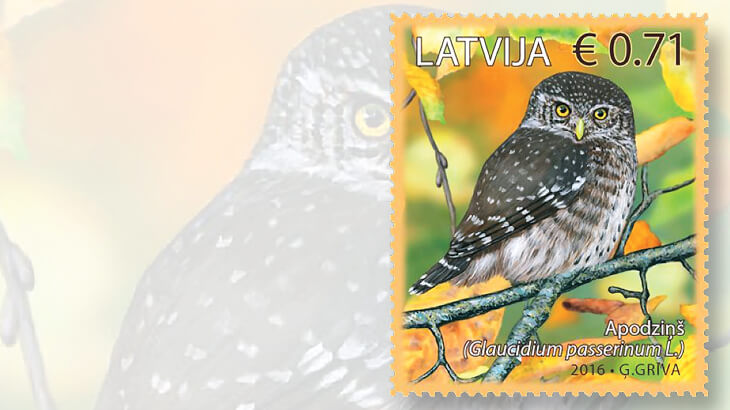 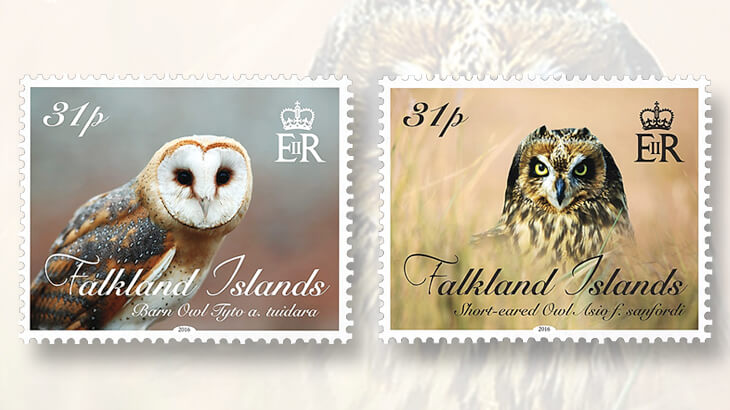 Photos of the Falkland Islands’ birds of prey are reproduced on a set of stamps issued Jan. 13. The barn owl and short-eared owl are included in this set. 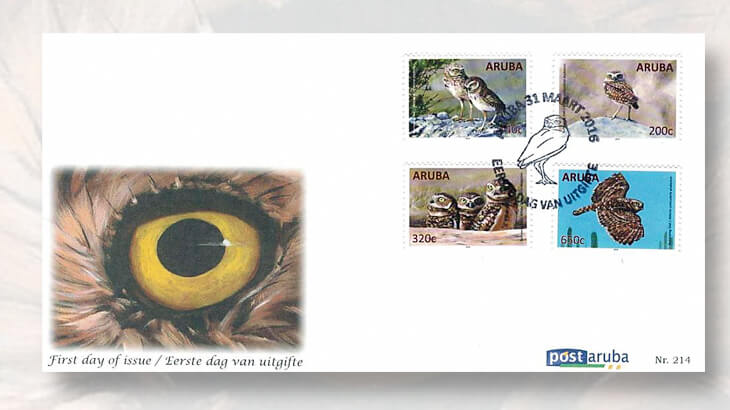 Aruba featured its burrowing owl on a set of four stamps issued March 31. The owl also is shown on the first-day cancel, and its eye is pictured on the cachet.
Previous
Next

A handful of postal administrations have featured owls on recent stamps.

Four of the nine species of owls found in Australia are depicted on the Owls: Guardians of the Night stamps issued July 5.

The rufous owl, also known as the rufous boobook, is named for its color. This large and powerful nighttime hunter inhabits dense eucalyptus rain forests, forests by rivers, and mangrove areas, according to Australia Post.

A boobook is a type of owl with a hawklike appearance. The southern boobook is the smallest and most widely distributed of Australia’s owls. However, Australia Post reports that the subspecies shown on the stamp, luridas, only is found in the dense rain forest around the Atherton Tablelands in Queensland.

The other two owls are masked owls with the characteristic heart-shaped facial disc.

As its name implies, the Eastern grass owl lives on the ground, usually in tall grass.

The sooty owl lives in tall forest and densely vegetated gullies along Australia’s eastern coast, according to Australia Post. This owl is rarely seen.

Australian wildlife artist Christopher Pope created the illustrations for the stamps, and Sharon Rodziewicz designed them.

EgoTrade Pty. Ltd. printed them by offset in sheets of 25, in a souvenir sheet with the four designs se-tenant (side-by-side), and as self-adhesives in booklets of 10.

Switzerland’s May 12 Nocturnal Animals set includes a tawny owl on the 85-centime denomination.

The design by Sonja Burger shows the owl flying on a starry night lit up by the full moon.

The tawny owl (Strix aluco), also called the brown owl, is the most common owl in Europe. As can been seen on the stamp design, it has a large wingspan, from approximately 32 to 40 inches.

Cartor Security Printing printed the stamps by offset. They are sold in panes of eight with images from all four of the stamps shown in the selvage of each pane.

The Dutch Caribbean Nature Alliance says of this owl: “The Dutch Caribbean islands are renowned for their rich and unique biodiversity, and for good reason. The Aruban Burrowing Owl (Athene cunicularia arubensis), known locally as Shoco, is an endemic sub-species of burrowing owl that occurs only on Aruba.

“This small, buffy-colored owl is unmistakable because of its large, round yellow eyes, prominent whitish eyebrows and unusually long grey legs. Burrowing Owls get their common name from their unusual habit of nesting underground in already dug-out burrows, although they are known to occasionally dig out their own.”

The alliance adds that this owl is endangered with only about 200 pairs remaining in the wild.

In 2012, this owl was declared a national symbol of Aurba.

A close-up of an owl’s eye is pictured on the cachet on the first-day cover from Aruba Post.

The barn owl (Tyto a. tuidara) and the short-eared owl (Asio f. sanfordi) are featured on 31-penny stamps in the Falkland Islands’ Birds of Prey stamp set issued Jan. 13.

The new-issue announcement from Pobjoy Mint, the philatelic agent for the Falkland Islands, reports that barn owls are found on every continent except Antarctica, with approximately 35 subspecies recognized around the world.

Also, according to the announcement, the main prey of the barn owls in the Falklands is the house mouse, adding that rats also make up a percentage of their diet.

The short-eared owl also is widely distributed around the world, but the subspecies Asio f. sanfordi is found only on the Falklands.

Rather than being completely nocturnal, this owl is considered diurnal and sometimes hunts during the day.

The other stamps in this Birds of Prey stamp depict the red-back buzzard, 76p; crested caracara, 76p; peregrine falcon, £1.01, and striated caracara, £1.22.

Georgina Strange designed the stamps using her own photos. BDT International printed the stamps by offset in sheets of 10.

Latvia began a Birds series in 2010, adding two stamps to it every year.

Europe’s smallest owl species, this pygmy owl (Glaucidium passerinum) measures about 6 inches in length and weighs a little more than 2 pounds. It is often active during the day, catching birds and mammals its own size.

Girts Griva designed these stamps, and Baltijas Banknote printed them by offset in sheets of 10.

As reported by Fred Baumann in the July 4 issue of Linn’s, Canada started a new series of stamps July 12 celebrating the official birds of Canada’s provinces and territories.

The great horned owl (Bubo virginianus) was adopted as the provincial bird of Alberta in 1977. It is shown in flight on one of the permanent-rate stamps in this Birds of Canada set of five designed by Kosta Tsetsekas and John Belisle.