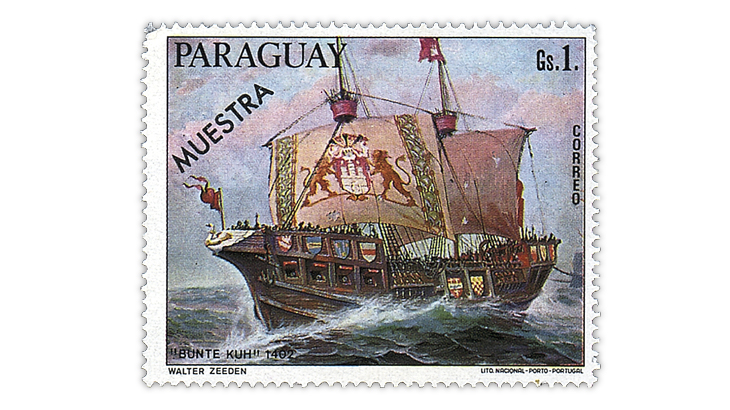 Paraguay stamps with the overprint “MUESTRA” (Spanish for specimen) appear throughout the listings in the Scott catalog. Editors are seeking examples without the overprint to update the images in the catalog.

Sometimes looking for stamps with low catalog values proves more challenging than you would think.

For years, Scott catalog editors have been working hard to update images for stamps of Paraguay that bear a specimen overprint in Spanish, “MUESTRA.”

An editorial note in the Scott catalog indicates that this overprint is not on the actual stamps.

Scott catalog editors would like to borrow examples of these stamps without the overprint so that replacement illustrations can be made. Specimens such as these were sometimes sent to stamp catalogers around the world and to other postal administrations, which is likely how some of these images were originally made for the Scott catalogs.

Pictured nearby is a single stamp from Paraguay’s 1976 German Sailing Ships set (Scott 1685) with the overprint in the upper left corner.

Three lists are included of Scott numbers of Paraguay stamps that Scott editors need to improve the catalog. The title of each list explains what is needed.

Stamps can be sent to Scott Catalog, Attn: Jay Bigalke, Box 4129, Sidney, OH 45365. The stamps will be returned after scanning.

If digital is easier, color scans at 600 dpi at 200 percent on a dark background can be sent to me via email at jbigalke@amosmedia.com. Both jpeg and tiff formats are acceptable.

Misuse of Shanghai overprints on cover