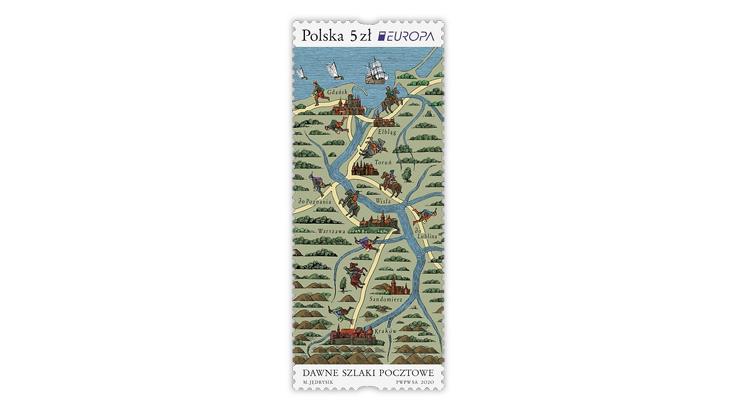 This Polish stamp was selected as the best Europa stamp of 2020 by a panel of experts. The Europa theme for the year was ancient postal routes. 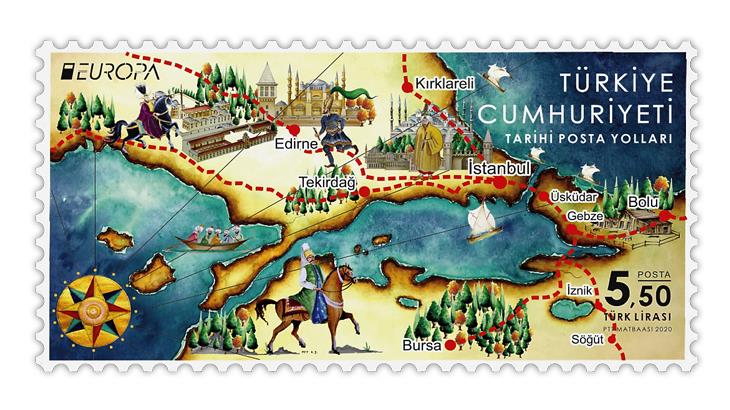 This Turkish stamp won PostEurop’s public online poll for the favorite Europa stamp of 2020. More than 38,0000 votes were cast in the online competition.
Previous
Next

Stamps of Poland and Turkey were voted as the most beautiful Europa stamps of 2020 in two separate competitions arranged by PostEurop, the Association of European Public Postal Operators.

The Polish stamp won the competition judged by a jury, and the Turkish stamp received the most votes in the popularity contest open to the public through the PostEurop website.

Both stamps illustrate the 2020 Europa theme of ancient postal routes.

A total of 55 postal administrations participated in the competitions, each entering one stamp.

In addition to showing a schematic map of Poland, the design includes images of ships, messengers on foot, mounted couriers, the Vistula River, and buildings representing cities along the river.

Because of the COVID-19 pandemic, the jury for the competition met virtually, according to the Dec. 6 press release from PostEurop.

Botond Szebeny, secretary-general of PostEurop, served as chairman of the jury. The other jurists were Guy Coutant of the Royal Belgian Academy of Philately; German stamp designers Stefan Klein and Olaf Neumann; Jurgen Haepers, who operates a blog site about Europa stamps; Eric Contesse, who also operates a blog about stamps; Marjan Osvald of Posta Slovenije, the PostEurop market activities circle chair; and Emile Espen of Post Luxembourg, the PostEurop stamps and philately vice chair.

Jurors Klein and Neumann said that “the winning design from Poland with its special proportions in vertical format expressed the theme in a perfect manner — colours and technique of the artwork are really modern and perfect for a small stamp.”

Szebeny, the jury chairman, said: “… I would also like to congratulate all of the designers for their accomplished effort in creating such complex and beautiful designs, as they are making it more and more difficult for the jury to elect the winning stamps.”

The online competition for the most beautiful Europa stamp received more than 38,000 votes, a record for that poll.

Agnieszka Trzaskowska, chair of stamps and philately for PostEurop, said, “I would like to thank everyone who voted during the online competition. A 53 percent increase in votes tells us that the online competition is gaining popularity. It makes me happy to see the growing engagement from voters all around the globe, this is highly beneficial for philately in general. This year’s theme was extremely special for PostEurop Members, giving us a certain nostalgic like feeling which represents the early days of our unique industry. I am happy to see that philatelic enthusiasts also have that same vibe, thanks to the beautiful illustrations and to the passion of our designers.”

The winning stamp from Turkey was issued May 9. The design of this 5.50-lira stamp includes similar elements to the aforementioned Polish stamp: a map, messengers on foot and horseback, ships and buildings.

Europa stamps from Armenia and Azerbaijan placed second and third in this poll, respectively.