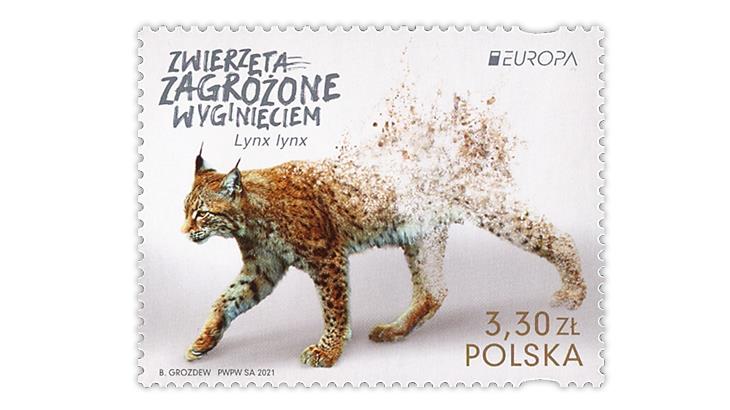 Poland’s 2021 Europa stamp featuring the Eurasian lynx was voted as the most beautiful Europa stamp of 2021. The theme of the multination series was national endangered wildlife. 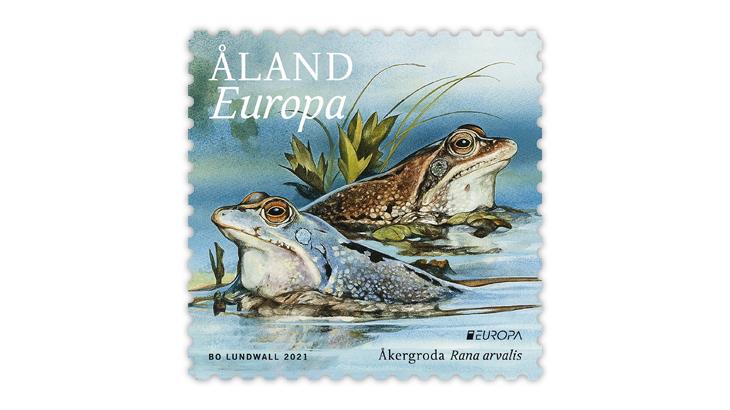 Aland’s moor frogs are pictured on the 2021 Europa stamp that placed second in the competition. 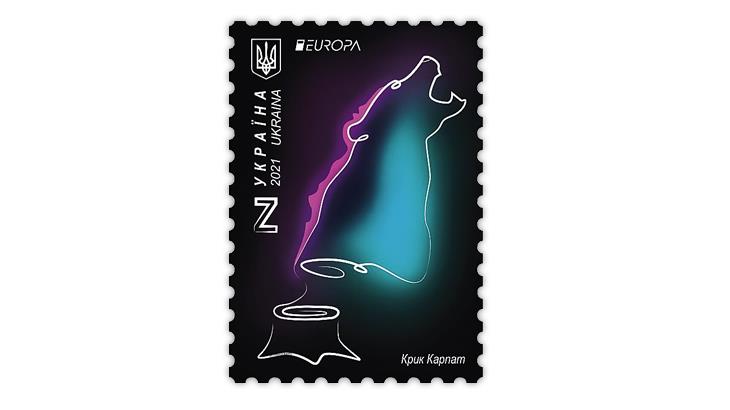 A stamp from Ukraine symbolizing the disappearance of the forests of the Carpathian Mountains and their wildlife came in third place in the Europa stamp poll.
Previous
Next

A stamp from Poland was voted the most beautiful Europa stamp of 2021 in a competition organized by PostEurop, the Association of European Public Postal Operators.

In an Oct. 8 press release, PostEurop reported that stamps from Aland and Ukraine placed second and third, respectively, in the contest.

The design by Bozydar Grozdew represents the threat of the disappearance of this species. The stamp was issued April 21.

Tomasz Zdzikot, the head of Poland’s post office (Poczta Polska), said: “Our project symbolically shows the condition of our planet, challenges, threats and the most urgent needs in the field of ecology. Postage stamps are not only carriers of this important message, but also small works of art of collector’s and artistic value. I would like to congratulate and thank the author of the stamp, as well as the entire staff of people involved in this project.”

Ukraine’s post office (Ukrposhta) issued two Europa stamps June 9. The stamp entered in the competition shows a design by O. Symonenko representing the disappearing forests of the Carpathian Mountains and their wildlife.

Both of Ukraine’s 2021 Europa stamps are nondenominated with the letter “Z” in place of the value. Ukraine’s post office reported that the Z corresponds to $1.

In previous years, PostEurop held two Europa stamp competitions, one judged by a jury and the other a popularity contest open to the public through the PostEurop website. This year PostEurop combined the two contests and also counted the votes of the postal operators.

Botond Szebeny, the PostEurop secretary-general, said, “Following a decision last year, PostEurop Members reshaped the format of the entire Europa Stamps Competition, making it more dynamic, competitive and appealing for philatelists around the globe. Votes that determine the winning stamps were divided into three equal parts, counting the weight between the votes of public (online), postal operators and jury experts.”

A total of 53 postal administrations participated in the contest, each entering one stamp. The winners were announced as part of a virtual event, the PostEurop plenary assembly, on Oct. 6.

Each year, member countries of PostEurop issue Europa stamps based on a central theme. The themes for the next three years will be stories and myths (2022), underwater fauna and flora (2023), and national archaeological discoveries (2024).