Postal history of the revolution in South Arabia 1963-68: Inside Linn's 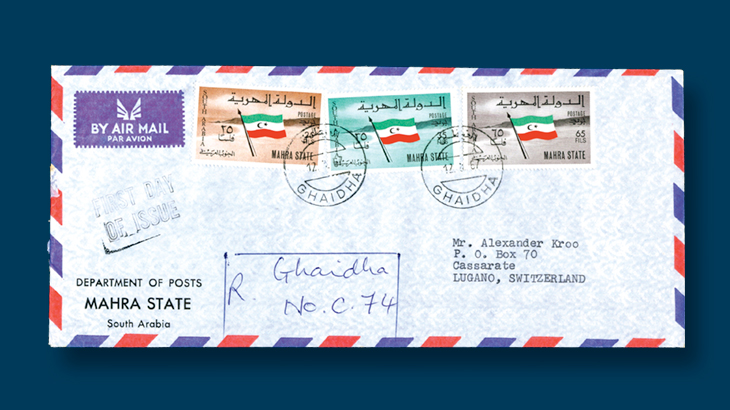 The postal history of the revolution in South Arabia 1963-68 is detailed in the Spotlight on Philately column by Ken Lawrence in the Nov. 20 issue of Linn's.

Are you ready for another edition of Linn’s Stamp News monthly magazine? We sure hope so, because the Nov. 20 issue is jam-packed with a marvelous assortment of in-depth, scholarly features that are sure to please. The presses are humming to get this thick 108-page issue ready for mailing Monday, Nov. 6. If you subscribe to Linn’s digital edition, you’re at the head of the line because you get early access Saturday, Nov. 4. To heighten your anticipation, we offer three glimpses of what lies between the pages.

Postal history of the revolution in South Arabia 1963-68

Sergio Sismondo, in Unveiling Classic Stamps, takes a peek at Canada’s first issue that included the world’s first stamp to picture an animal. The other two denominations in the set of three portray Great Britain’s Prince Albert and Queen Victoria.

Stockholm’s City Post was brief but with collectible results

Nordic Stamp Scene columnist Christer Brunstrom looks at the short-lived Stockholm City Post operated during the late 1880s in competition with Sweden’s national postal system. It was legislated out of existence after operating for less than two years.