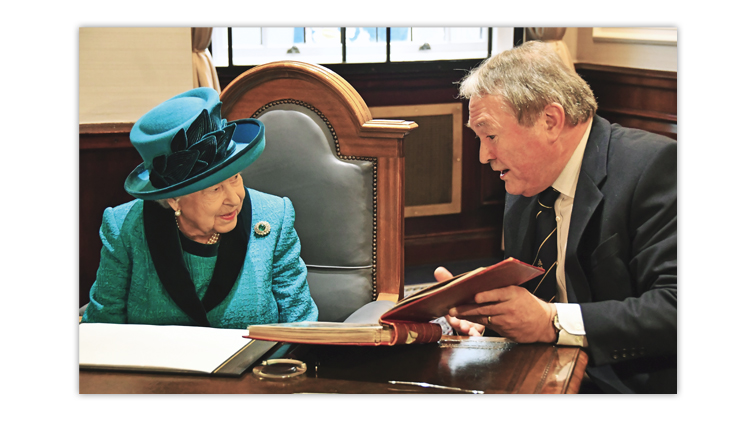 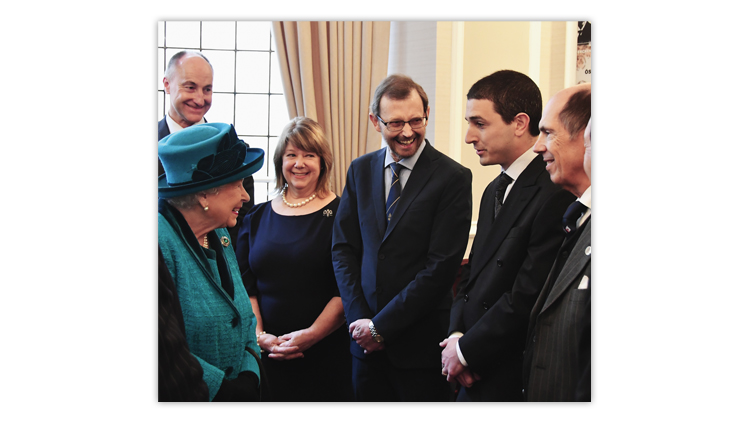 Queen Elizabeth II speaks with Alex Haimann at the opening of the Royal Philatelic Society London headquarters. Standing in the center are RPSL members Carol Bommarito and Eddie Bridges, visiting from the United States. 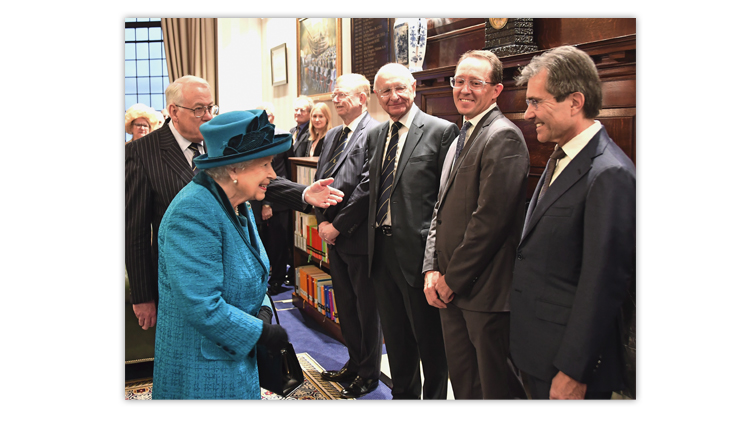 At 11 a.m. GMT on Nov. 26, Queen Elizabeth II arrived at 15 Abchurch Lane in London to officially open the new headquarters of the Royal Philatelic Society London.

The visit was also in celebration of the society’s 150th anniversary.

The queen last visited the society’s premises in 1969 to mark the group’s 100th anniversary.

Queen Elizabeth II is the granddaughter of the famous royal philatelist and former RPSL president King George V. She honors his legacy through her ownership of his stamp collection (known today as the Royal Philatelic Collection) and her efforts over the years to display parts of the collection at events in the United Kingdom and around the world.

A limited group of 130 members, fellows and staff were present for this historic event.

The queen’s visit began with a tour of the ground floor members’ lounge and the RPSL museum.

One item displayed by request of the queen was a letter from King George V giving his affirmative opinion on the continuation of “London” in the society’s name following the granting of royal patronage in 1906 by the king’s father, Edward VII.

The resulting decision and the continuation of royal patronage by George V, Edward VIII, George VI and Elizabeth II confirms the society’s name since 1906 as the Royal Philatelic Society London.

After viewing a series of special items in the museum displays and meeting a group of society officers and prominent members, the queen took the elevator up one floor to the first-floor meeting room.

Here the queen walked around the room to meet small groups of the society’s members. Each group represented a different area of the society’s functions and membership activities including collections, overseas membership, publications, youth philately and expertizing.

The queen next ventured to the library in the first basement level.

The visit concluded with a return to the ground floor members’ lounge and the unveiling by the queen of an engraved stone plaque marking the occasion of the official opening of the building. The assembled members erupted with applause immediately after the unveiling.

The queen graciously added her signature to a page commemorating her 2019 visit.

Among the RPSL members introduced to the queen during her visit were four from the United States: Don Sundman, Carol Bommarito, Eddie Bridges and Alex Haimann.

As the owner of the world’s most important stamp collection, the most depicted person on worldwide postage stamps and the society’s royal patron, the queen was the perfect person to officially open the new headquarters of the RPSL, the world’s oldest philatelic society.