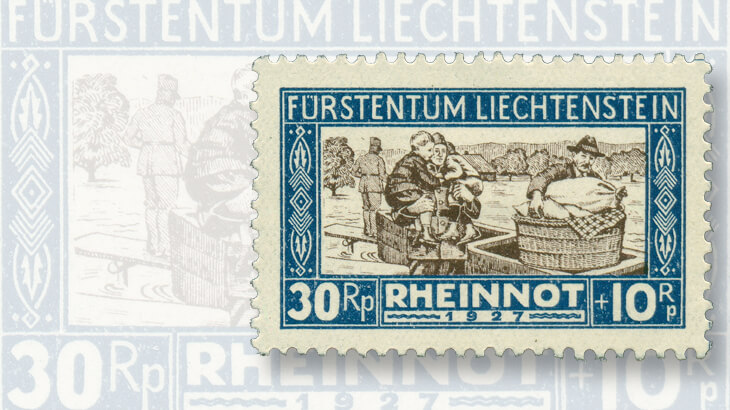 Swiss military pontoniers brought their skills to help the victims of the Rhine flooding in Liechtenstein in fall 1927. 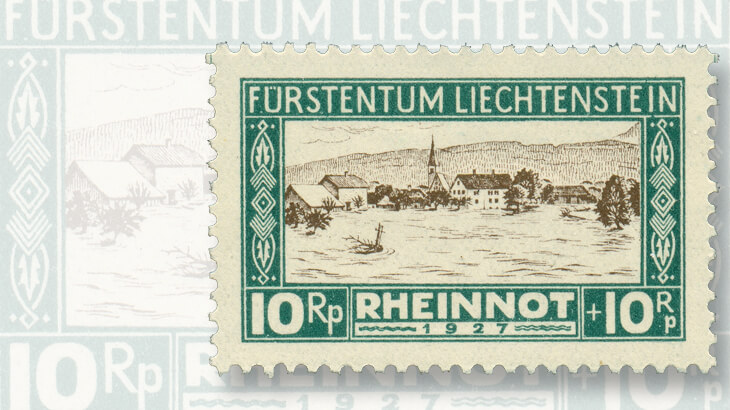 Only the tallest structures of the low-lying town of Ruggell in northern Liechtenstein were even partly visible after the 1927 flooding. 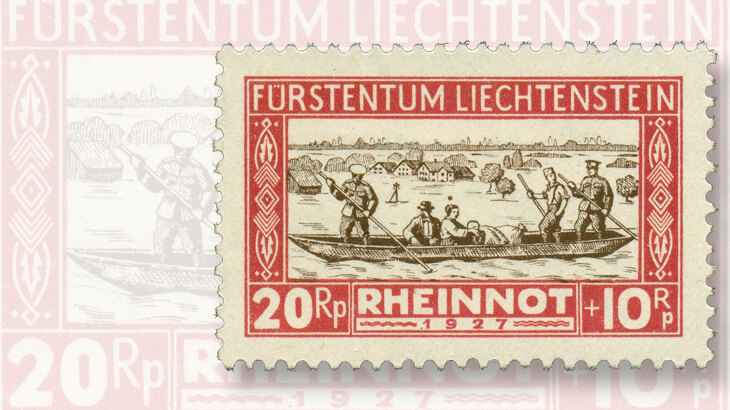 Neighboring Austria sent soldiers to Liechtenstein to assist in rescue efforts after the September 1927 flood, as shown on the 20rp+10rp semipostal. 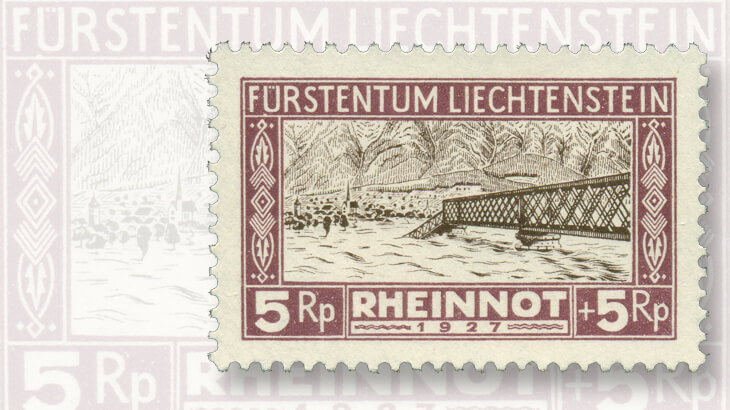 The lowest denomination, 5 rappen+5rp, of Liechtenstein’s 1928 Rheinnot flood-relief stamp set pictures the breached embankment of the Rhine and the ruined railway bridge at Schaan.
Previous
Next

On Sunday, Sept. 25, 1927, heavy warm rains in the Swiss Alps melted ice and snow, raising the level of Lake Constance by 15 feet and turning the Rhine River into a raging torrent.

A concrete dam on the border between Switzerland and Liechtenstein failed, and that small landlocked country essentially filled up to become a muddy lake.

The sixth smallest sovereign country in the world, the Principality of Liechtenstein is about the size of Washington, D.C. New, more accurate measurements in 2006 added about one-fifth of a square mile to the country, bringing it to almost 100 square miles.

The principality is a constitutional hereditary monarchy, with 17th-century roots in the House of Liechtenstein. The sovereign nation had economic and postal relationships over time with the German Confederation, Austria and Switzerland, but began issuing its own postage stamps in 1912.

The nation is primarily German-speaking, and its stamps carry the principality’s official name in that language: Fuerstentum Liechtenstein.

The Rhine River (Rhein in German) rises in the Alps in southeastern Switzerland and forms part of the border between that country and Liechtenstein. The river flooded regularly and disastrously over the centuries, with the first documented flood in Liechtenstein in 1206.

In the 1927 flood, in addition to the breached dam, the Austrian Federal Railway bridge at Schaan was the other major structural victim. Trees were uprooted and cattle were washed away, and the country’s farmlands were submerged in the muddy waters. Thousands of the population of 9,500 were made homeless, but astonishingly, only two drownings were reported.

In an unprecedented show of support, 710 volunteers from 25 countries went to Liechtenstein to help dig it out of the mud. Austria and Switzerland sent soldiers to assist in relief efforts.

Fortunately, falling temperatures in the Alps halted the snow melt and the rainfall stopped, but international news stories on Sept. 27 described a scene of devastation, “Nearly the whole of Liechtenstein is reported as presenting the appearance of a huge bog, with only the bolder housetops and church spires protruding from the mud.”

Liechtenstein made a general plea for international aid, and the American Red Cross sent $5,000 — about $69,000 today.

The United States was still recovering from the Great Mississippi Flood of April 1927, the most destructive river flood in U.S. history. The Mississippi flooded for nearly its entire length, killing 246 persons and leaving a million homeless, with $400 million in damages.

The railroad bridge at Schaan was repaired by Nov. 17, 1927, but it was almost Christmas before the dike was again intact. The farmlands were not cleared and dry enough for cultivation for many months. Damage from the flood of 1927 was estimated at millions of francs during the next five or six years of recovery.

Liechtenstein had issued three semipostal stamps in October 1925 honoring the 85th birthday of its ruler, Prince Johann II, with the surcharge in support of charity. Three more semipostals were issued in October 1927, the month after the flood, for the prince’s 87th birthday, and it evidently occurred to someone that a similar stamp issue might provide some funds for flood relief.

The artist for the designs of the October 1925 and October 1927 semipostal stamps was Eugen Verling, a native of Vaduz who had moved to Switzerland at age 18 to become an apprentice lace designer. Verling (1891-1968) was largely self-taught as an artist, but some of his landscapes had drawn public attention and he was commissioned in 1923 to design a tax stamp for Liechtenstein.

Verling’s first postage stamp design for Liechtenstein was for a 5-rappen issue of 1924 (Scott 75), depicting a farmworker balancing a large basket on his back. The design is variously known as “the vinedresser” or simply “a peasant.” Verling also prepared the design of Scott 80 in 1924, a 1½-franc stamp showing the government palace and a church in Vaduz.

Verling was given the commission in November 1927 to design semipostal stamps for flood relief, basing them on photographs taken during the disaster. He prepared six designs, of which four were accepted and produced as stamps. Each of the four different designs and denominations says “Rheinnot” at the bottom, translating as “Rhine Need,” “distress” or “trouble.”

The 5rp+5rp stamp (Scott B7), in brown-violet and brown inks, shows the breached Rhine embankment and damaged Schaan railroad bridge.

The inundated village of Ruggell is shown on the 10rp+10rp stamp in blue-green and brown (Scott B8). Ruggell is the northernmost and lowest-lying municipality in Liechtenstein’s Rhine valley.

Swiss “pontonier” soldiers appear on the 30rp+10rp stamp in deep blue and brown inks (Scott B10). Swiss and Austrian military mail postmarked at Schaan exists for this time period.

The Rheinnot stamps were printed in sheets of 25 on white unwatermarked paper at Orell Fussli & Cie in Zurich, a printing firm dating to 1519, and a stamp printer since 1843. The print run seems to have been 300,000 sets of the four designs.

The stamps were perforated gauge 11½ and issued Feb. 6, 1928. They were on sale at postal windows in Liechtenstein until Nov. 1, 1928, and valid for use until the end of that year.

Because the stamps seem to have been marketed only within Liechtenstein, and thus sold essentially to the victims themselves, it’s not surprising that the effort was not a great success as a fundraiser. In his exhibit of Eugen Verling’s stamps, posted on the website of the Helvetia Society of Great Britain, Robert Wightman states that “about 82% of the total printing” was unsold and destroyed after the period of validity.

M.W. Lymer of the Liechtenstein Study Circle wrote that “more than 250,000” sets were burned.

The Rhine has long since been straightened and controlled, to the point where some travel writers say that the river’s progress through Liechtenstein now resembles a canal, though watery devastation continues as recently as this past summer in other parts of Europe.

The Liechtenstein Rheinnot semipostal set is valued in the Scott Classic Specialized Catalogue of Stamps and Covers 1840-1940 at about $88 mint and $104 used. A set of all four denominations on first-day cover is the top of the market for these issues, at $650.

Thanks to Beat Vogt, division manager for Liechtensteinensia, National Library of Liechtenstein, Vaduz, for research assistance.