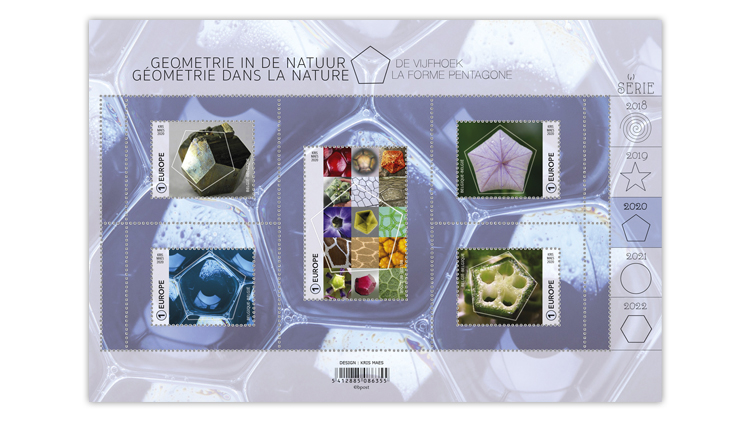 Soap bubbles and other pentagons found in nature are featured on a new pane of stamps from Belgium, part of a five-year series called Geometry in Nature. The geometric shapes for the five years are represented in the selvage. 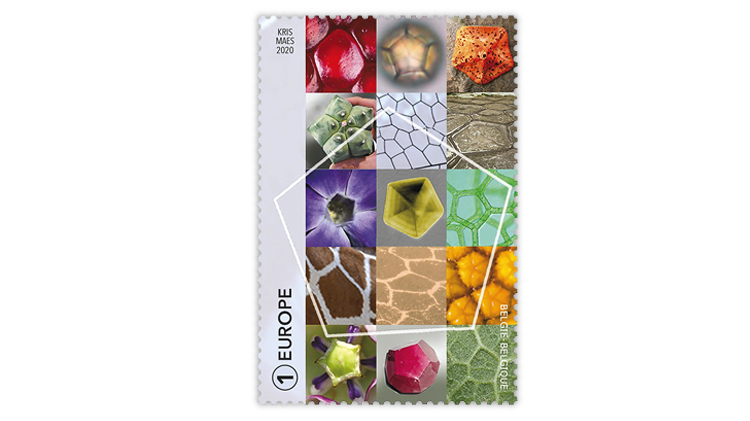 The center stamp in Belgium’s latest Geometry in Nature pane includes photographs of 15 items that are shaped like a pentagon. 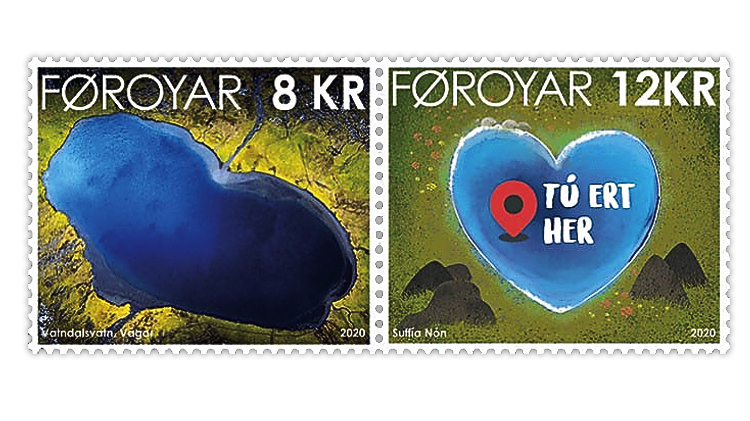 Faroe Islands shows a real heart-shaped lake, Lake Vatndalsvatn, on one stamp in this se-tenant pair issued Feb. 14 and a symbolic lake on the other one. 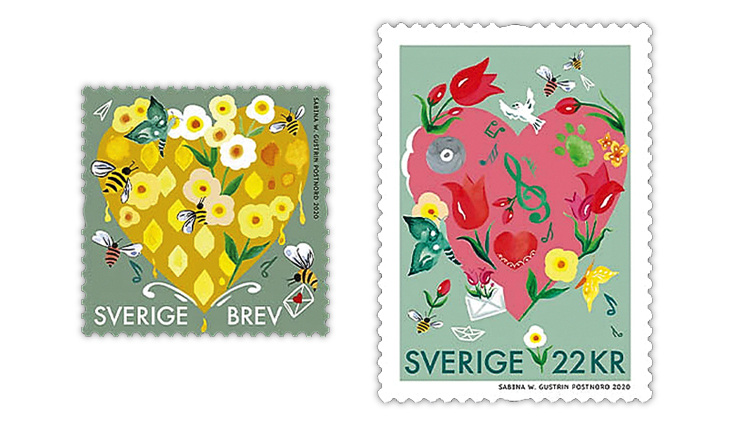 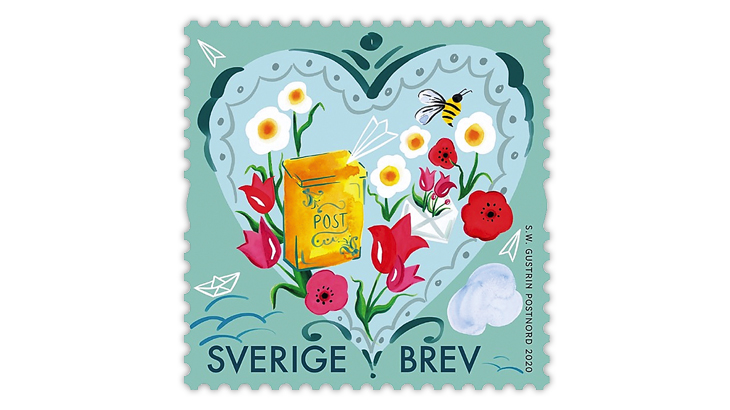 A gold mailbox is among the items pictured on this Swedish stamp from the new Heartfelt Greetings booklet. 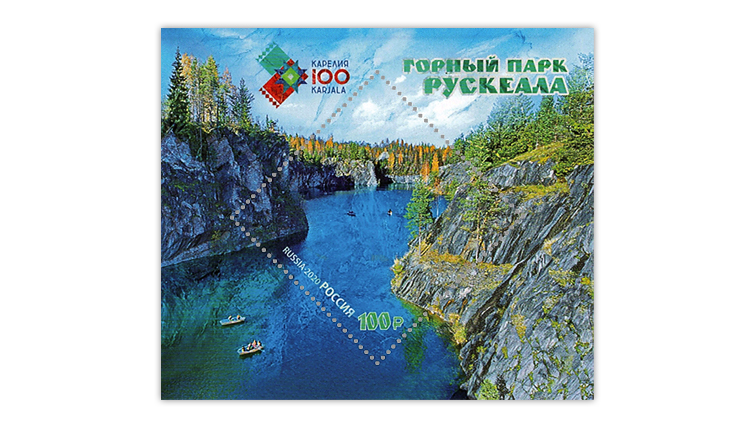 A marble quarry lake is depicted on the diamond-shaped stamp on this Russian souvenir sheet issued Jan. 23 to honor the Republic of Karelia. 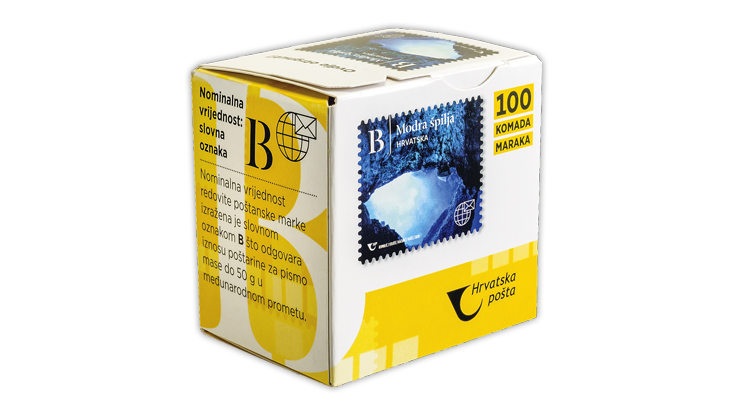 The new Natural Beauties of Croatia stamps are that country's first self-adhesive stamps issued in a coil format. The box for the coil of 100 stamps featuring the Blue Cave on island of Bisevo is shown. 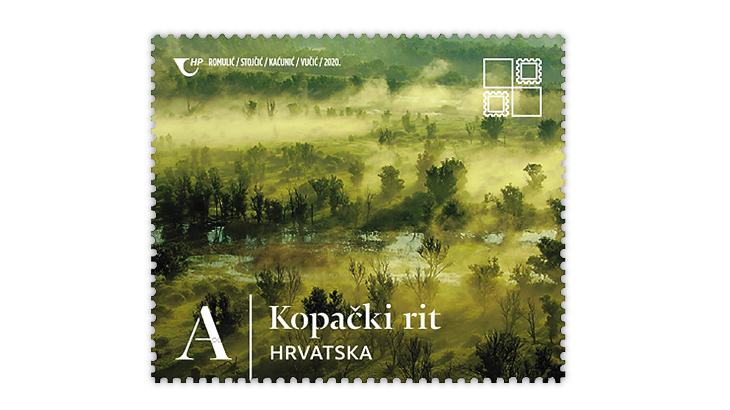 The Natural Beauties of Croatia definitives are nondenominated. The stamp for the the basic domestic rate bears the letter A and shows a photograph of Kopacki rit Nature Park. 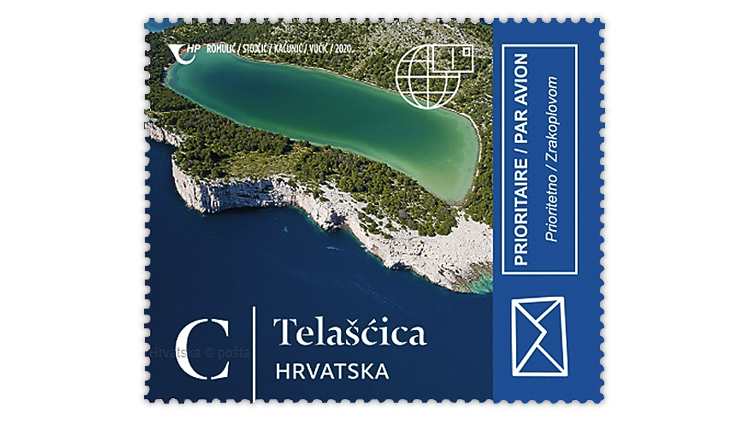 Croatia began a new series of stamps called Natural Beauties of Croatia on Jan. 28. The stamp for international letters reproduces a photograph of a salt lake in Telascica Nature Park.
Previous
Next

A series of stamps from Belgium focuses on geometric shapes found in nature.

The planned five-year Geometry in Nature series began June 11, 2018, with a pane of five stamps picturing spirals in nature (Scott 2858). Star-shaped items were featured on the second pane in the series (2896) issued June 17, 2019.

Pentagons are represented on this year’s pane of five issued Jan. 27. Each stamp is nondenominated, paying the basic rate for letter mail to European countries (currently €1.55), and each design includes an outline of a pentagon plus a natural object or objects that appear to have five angles and five sides.

The stamp in the upper left features the mineral pyrite, also known as fool’s gold, according to information in Philanews, the new-issue bulletin from Belgium’s Bpost.

Soap bubbles are pictured on the stamp in the lower left and in the selvage of the pane. Stamp designer Kris Maes said in Philanews, “Apparently when the soap bubbles cling to each other, they are shaped like a pentagon.”

The two stamps on the right side of the pane show photographs of plants forming pentagons. Platycodon grandiflorus, commonly known as a balloon flower or bellflower, is pictured on the top stamp and a cut section of okra on the bottom.

Philanews does not identify the items in the 15 photographs shown on the center stamp, but the designer provides some clues in this quote: “This selection includes elements of the micro and macrocosm. At the microscopic scale it was easy to spot pentagons. They are found in particular in plankton and algae. I’ve been working for a few years now on this series and I continue to be surprised by nature and its propensity to create on her own such geometric figures.”

The selvage on the right side of the pane depicts the five shapes to be featured in the Geometry in Nature series. As can be seen from these images, the series will continue in 2021 with circular shapes and end in 2022 with hexagons.

On Valentine’s Day, Feb. 14, Faroe Islands issued a se-tenant pair of stamps featuring Vatndalsvatn, the heart-shaped lake on the island of Vagar.

It takes about an hour to hike up to this mountain lake, according to the Visit Vagar tourism website.

The website said: “On the map, Vatndalsvatn appears completely heartshaped, though, the changes in the coast around it over the years has morphed it slightly. This makes it ideal for a romantic hike, and many a couple has had their photo taken with the heartshaped lake in the background.”

In its new-issue announcement, Posta Faroe Islands offered additional tourism advice, “Reportedly, Lake Vatndalsvatn is also a good place to catch mountain trout if you would get a bit tired of romance.”

The 8k stamp in the se-tenant pair shows the actual lake, while the 12k denomination depicts a symbolic heart-shaped lake marked with the message “Tu Ert Her” (Danish for “you are here”).

Suffia Non designed the stamps, using a photograph by Roy Mosterd. Cartor Security Printing of La Loupe, France, printed the stamps in panes of 10 (five of each design).

The designs in a new set of Greetings stamps from Sweden combine birds, insects and flowers with heart shapes. Some designs also include musical notes and postal themes.

Called Heartfelt Greetings, the seven stamps were designed by Sabina Wroblewski Gustrin and issued Jan. 9. Five of these stamps are in a booklet of 10 (two of each design), and the other two were produced in separate coils of 100.

The nondenominated domestic-rate coil stamp inscribed “brev” (Swedish for “mail”) depicts bees buzzing around flowers on a yellow heart dripping with honey. One bee is carrying a small envelope sealed with a heart.

The current domestic letter rate in Sweden is 11 kronor.

The other coil stamp is denominated 22k to pay rates for international letter mail and domestic letter mail that weighs between 50 grams and 100 grams.

The design features a pink heart, a treble clef, musical notes, birds, butterflies, bees, tulips and other flowers. Tulips are popping out of the envelope shown on the stamp.

Like the first coil stamp, the five booklet stamps are nondenominated and inscribed “Brev.” The hearts are in shades of pink, light blue and light green.

A gold mailbox marked “Post” is pictured on one of the booklet stamps with a light blue heart. A bee and a variety of spring flowers also are shown.

Russia honors the Republic of Karelia and its Ruskeala Mountain Park on a souvenir sheet with a diamond-shaped stamp. The sheet was issued Jan. 23.

The 100-ruble stamp shows a former marble quarry that is now filled with water, This and other nearby quarries were opened in the late 18th century to mine marble for the construction of palaces in St. Petersburg.

The image of the quarry and the canyon walls that surround it continues into the selvage of the souvenir sheet. The logo of the Republic of Karelia centennial celebration is shown in the upper left.

The souvenir sheet is sold in a souvenir pack that includes text in both Russian and English.

The English text says, in part: “The Ruskeala landscape surprises and astonishes with its beauty. A pearl of the park is a former marble quarry. Nowadays, it is a huge stone bowl filled with bluish-emerald water.”

Croatia highlights its natural beauty on nondenominated “A” “B” and “C” definitive stamps issued Jan. 28 in separate sheets of 50 and coil rolls of 100. The sheet stamps have traditional gum, and the coil stamps are self-adhesive.

Croatian Post reports that these are its first self-adhesive coil stamps.

The box containing the coil roll of 100 of the nondenominated B stamp is shown here. This stamp, which pays the basic international letter rate (currently 8.60 kune), shows a photograph of the Blue Cave located on the small island of Bisevo in Balun Bay.

The Total Croatia News website described this popular tourist spot: “The cave is famous for the mesmerising blue light filling the space at a certain time of day, when the sunlight hits the sea surface through an opening on the vault. The light reflects off the water and the white seabed, wrapping the whole interior in a layer of iridescent blue.”

The green landscape of Kopacki rit Nature Park is captured in the photograph shown on the nondenominated A stamp for the domestic letter and postcard rate (3.10k).

Located on a floodplain created by the Danube and Drava rivers, this wetlands park is an oasis for wildlife, including 300 species of birds, according to Croatian Post.

The C stamp pays the rate for international priority letters and postcards (14k). The design features Lake Mir, a salt lake in Telascica Nature Park on the island of Dugi Otok in the Adriatic Sea.

In addition to the lake, the park is known for its “plants and animals, the diversity of the seabed, the geological features and the remains of human antiquity,” according to Croatian Post.

The printing firm AKD in Zagreb, Croatia, printed these definitives.