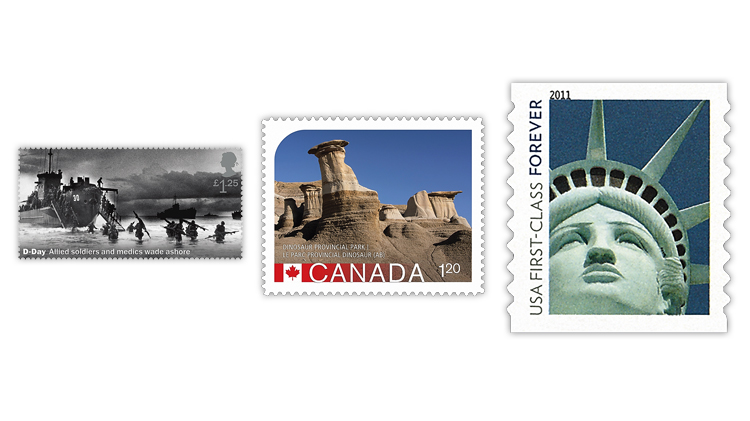 What do these three stamp designs of Great Britain, the United States and Canada have in common?

Sometimes it pays for a postal administration to show the public an image of a stamp design before the stamp is printed. Let me count the ways.

On Dec. 27, 2018, Great Britain’s Royal Mail announced its 2019 stamp program and provided images of three stamp designs, one of which was part of a set of 11 commemorating the 75th anniversary of D-Day. Linn’s went to press that same day, and when we returned to the office the next morning, we were quickly writing a story about how the stamp design did not show a D-Day scene. Luckily for Royal Mail, the stamp issue had not been printed yet, and the design will be corrected before the D-Day stamp set is issued in June.

In December 2010, the United States Postal Service rushed into service the Lady and Liberty forever stamps that had been unveiled about 30 days earlier. A couple of months later, it was discovered that the photograph selected for the stamp did not depict the Statue of Liberty in New York Harbor but instead showed a replica in Las Vegas. The sculptor of the replica took the USPS to court and will get about $3.6 million for the unauthorized use of his Statue of Liberty artwork on the stamps.

While I could continue with similar examples from around the world, I will conclude with one from Canada. On July 3, 2015, Canada Post issued a $1.20 stamp that was supposed to honor Dinosaur Provincial Park in Alberta (Scott 2844a, 2845). However, the stamp pictured a photograph of a different location, also in Alberta. Days later, Canada Post recalled and destroyed all stamps that had not already been sold. On Aug. 21, a stamp showing the correct park was issued (2857-2858).

If the United States and Canada had revealed the designs of these stamps before they were printed, they would not have incurred the extra cost and embarrassment.

I would encourage all postal administrations to consider a dual media splash for new stamps: a pre-announcement before the stamp is printed, and a second announcement on the issue date. It could generate extra publicity and save money in the end.