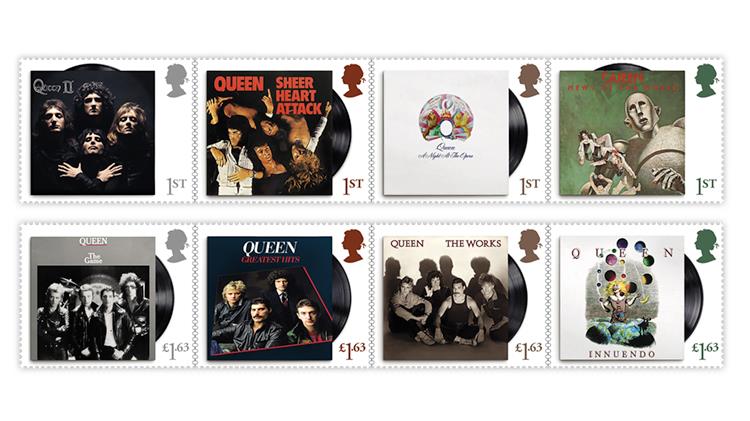 Great Britain’s Royal Mail commemorates the 50th anniversary of the rock band Queen on the fourth set of stamps in its Music Giants series. Eight of the stamps in this July 9 issue feature the covers of Queen albums released from 1973 to 1991. 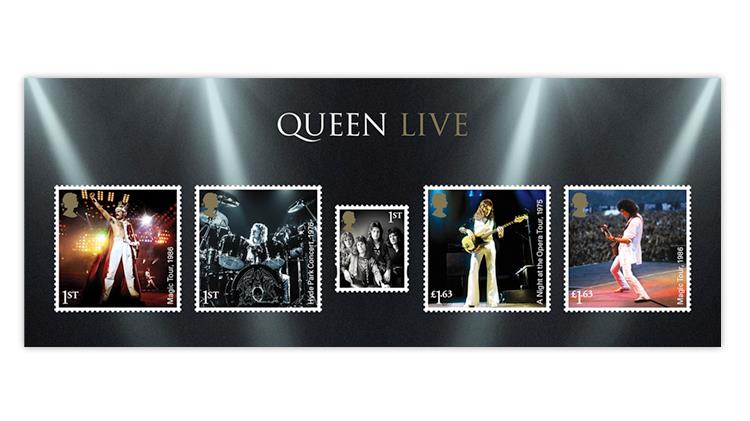 The souvenir sheet in Royal Mail’s tribute to Queen includes four stamps each showing a concert photograph featuring one of the band’s original members: Freddie Mercury, Roger Taylor, John Deacon and Brian May. A studio portrait of the band is reproduced on the stamp in the center of the sheet.
Previous
Next

In its June 24 press release about the stamps, Royal Mail said it was commemorating rock royalty and one of the “most popular and enduring groups of all time.” It also used lyrics from the band’s 1974 single Killer Queen in promoting the stamps, “Guaranteed to blow your mind … !”

Mercury died in 1991. The other three original members of the band — guitarist Brian May, drummer Roger Taylor and bassist John Deacon — are still alive, although Deacon retired in 1997. (May and Taylor continue to tour as Queen with Adam Lambert as the lead singer.)

The aforementioned 1999 stamp features Mercury, but Taylor can be seen playing the drums behind him.

Eight of the new Queen stamps depict album covers. The other five stamps are together in a souvenir sheet and feature scenes from live performances and a studio photograph of the band.

Taylor said of this issue: “Wow … stamps featuring our albums! What an honour. We must be really part of the furniture now! Thanks Royal Mail for stamping on us! In gratitude.”

Brian May said: “It’s hard to put into words what I feel when looking at these beautiful stamps. Since we four precocious boys started out on our quest 50 years ago, our lives have been devoted to making our impossible dream come true. … I just know that I feel an overwhelming desire to own one of these sets! Somehow it will be a way of persuading myself that it really DID all happen!”

The band’s list of musical achievements is rivaled by few, Royal Mail said, mentioning countless platinum, multi-platinum and gold albums, numerous awards, induction into the Grammy Hall of Fame and receiving a Grammy Lifetime Achievement award. Queen also was inducted into the Rock and Roll Hall of Fame in 2001.

The stamps featuring album covers are in two se-tenant (side-by-side) strips of four. The stamps in one strip are nondenominated, paying the first-class rate (currently 76 pence). The stamps in the other strip are denominated £1.63 to match the worldwide rate for letters up to 20 grams.

The albums are shown chronologically, beginning with the group’s second album, Queen II released in 1974,  on the first stamp in the first-class strip.

The album cover features a photograph of the band. According to the Queen official website, the cover “concept was based on a photograph of Marlene Dietrich that Freddie had seen, and Mick Rock was brought in to achieve a similar effect. The image has since become one of the most recognisable and frequently used of the band, and is as striking today as it was in the 1970s.”

The band’s third album, also released in 1974 and also featuring a photograph of the band taken by Rock, is shown on the second stamp in this strip of four. This album, Sheer Heart Attack, was Queen’s first to reach the Top 20 in the United States, and the single Killer Queen reached No. 12.

The third stamp in the strip shows the cover of the fourth album, A Night At The Opera, which propelled “Queen on to the world stage on a mammoth scale,” according to the aforementioned Queen website. This 1975 album featured the almost 6 minutes long (5 minutes and 55 seconds) Bohemian Rhapsody, the band’s most iconic and popular song.

Royal Mail said that “in the era of digital music, Bohemian Rhapsody has become the most streamed song from the 20th century.”

The album cover depicts the crest that Mercury created for the band on a white background.

Illustrated on the last stamp in this strip is the cover of the sixth album, News of the World released in 1977. The cover artwork, which shows a giant robot picking up the four band members, is based on a painting by American science fiction artist Frank Kelly Freas.

The album introduced the songs We Will Rock You and We Are the Champions that quickly became crowd favorites at sporting events.

The first three album covers in the £1.63 strip of four reproduce photographs of the band.

The strip begins with The Game. Released in 1980, Queen’s eighth studio album included the international hit single Another One Bites the Dust.

The second stamp features the 1981 Greatest Hits, the all-time biggest selling album in the United Kingdom with more than 6 million copies sold, according to Royal Mail.

The Queen website said of one of the songs from Innuendo: “The Show Must Go On has to be singled out as probably the most poignant and emotive recording on the album, and of course is the track that closes the LP. Freddie and Brian conceived and developed this song together, with Brian furiously scribbling down lyrics for Freddie to record while he still could. It is a triumph on every level, and of course it would become a much loved Queen classic.”

The album cover is based on the illustration Juggler of Universes by 19th-century French artist known as J.J. Grandville.

In addition to albums, Queen was “renowned for the extravagance of their stage shows,” Royal Mail said when describing the souvenir sheet.

“From the outset, the theatricality of Queen’s music found a natural outlet in their stage shows,” according to Royal Mail. “As glam rock flowered alongside Queen’s rise to fame, the group would tap into the extravagance of the era — and then very quickly outstrip it.

A color photograph featuring a bare-chested Mercury wearing a cape and a crown is shown on the first of the three first-class stamps in the souvenir sheet. The photo was taken during one of the band’s two Wembley Stadium concerts in the 1986 Magic tour.

Pictured next is a black-and-white photograph of Taylor playing the drums at the 1976 Hyde Park concert.

The third first-class stamp, also in black-and-white, shows the band from its first studio photo shoot in 1974.

The two £1.63 stamps in the souvenir sheet depict Deacon playing bass and May playing guitar, respectively. The Deacon photo is from one of the two 1975 Hammersmith Odeon concerts in the A Night at the Opera tour, and the May photo was taken in Budapest, Hungary, during the 1986 Magic tour.

The heading “Queen Live” appears at the top of the souvenir sheet.

The strips of first-class and £1.63 stamps were produced in separate sheets of 48 (sold in panes of 24) in most postal outlets. Studio Dempsey designed these stamps, and the photos of the album covers were taken by Geoff Dann.

Royal Mail plans to issue three booklets in conjunction with the Queen stamps, two on July 9 and one next year. Scheduled for release March 12, 2021, it will contain six definitive-sized stamps featuring the band, according to Royal Mail.

One of the July 9 booklets is a retail booklet with six first-class self-adhesive stamps printed by gravure. This booklet includes the stamps showing the Queen II and A Night At The Opera album covers. The other four stamps are Queen Elizabeth II definitives.

The other pages in the prestige booklet combine photographs and text by music journalist and biographer Jason Draper “charting the success” of the band from its formation to it becoming a global phenomenon,” according to Royal Mail.

Related products from Royal Mail include first-day covers, two first-day cancels with different lyrics from Bohemian Rhapsody, 14 postcards reproducing enlarged images of the stamps and the souvenir sheet, and a presentation pack.