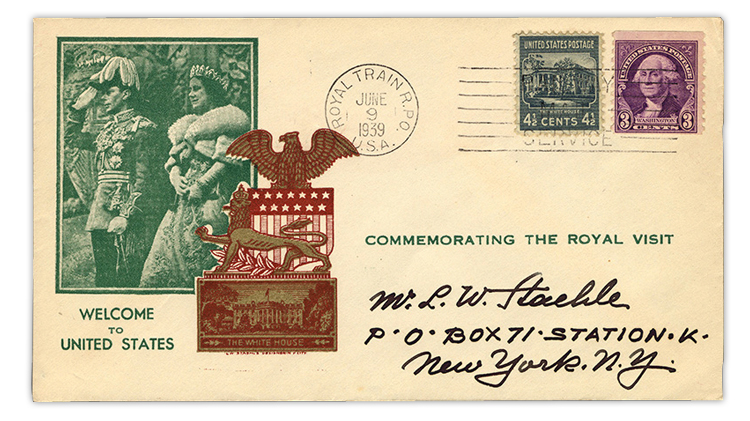 A Royal Train railway post office cover postmarked June 9, 1939, commemorated the royal visit of King George VI and Queen Elizabeth to the United States and Canada. That visit is the theme of the Smithsonian’s National Postal Museum’s Oct. 17-19 celebrati

This year marks the 150th anniversary of the Royal Philatelic Society London. The Smithsonian’s National Postal Museum will host the official North American celebration Oct. 17-19 at the Washington, D.C., museum.

The museum will display items of the British Empire and Commonwealth, including royal autographs and more from its collection.

Approximately 50 exhibitors, all North American members of the RPSL, will participate in a noncompetitive single-frame exhibition. I am excited to say I am among those exhibiting, specifically a collection of items related to Linn’s Stamp News founder George W. Linn.

The theme of the Smithsonian event is the 1939 state visit of King George VI and Queen Elizabeth.

“The royal visit marked the only time the world’s most two famous stamp collectors — The King and President Franklin Delano Roosevelt — met face-to-face,” the museum said in a press release. “In the same way, eighty years later, the Smithsonian and RPSL will bring together some of the world’s leading philatelists for three days of activities.”

The exhibition and displays are open to the public. For more information on the event, visit the National Postal Museum website.