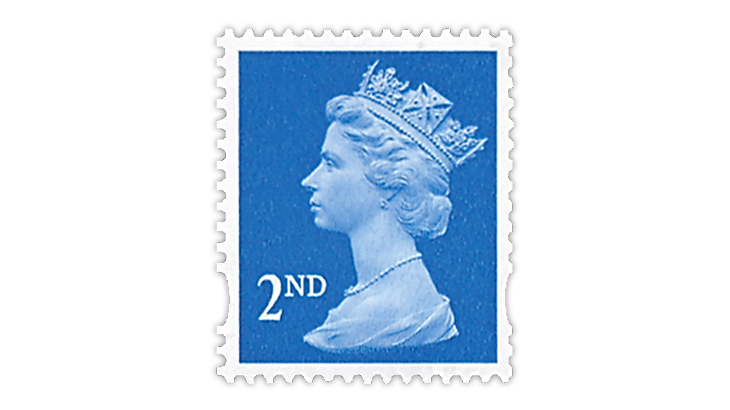 Great Britain will raise its second-class rate to 61 pence on March 25. Its nondenominated stamps are always valid for the indicated rate.

This year, Royal Mail announced on Feb. 22 that both the first- and second-class rates would increase by 3 pence on March 25: from 67p to 70p for first-class and from 58p to 61p for second-class.

In many news reports in Great Britain, the announcement of the rate increase was accompanied by an apology from Royal Mail. For example, a Feb. 22 report by Matthew Cannon on the website of BBC News (www.bbc.com) was headlined "Royal Mail ‘sorry’ for raising stamp price above cap."

Cannon’s report began, "From 25 March, the price of a second-class stamp will rise by 3p to 61p — breaching Ofcom’s current price cap of 60p which is in place until 1 April."

Ofcom, Great Britain’s regulator for communications services, also oversees "the universal postal service, which means Royal Mail must deliver and collect letters six days a week, and parcels five days a week, at an affordable and uniform price throughout the UK," according to its website (www.ofcom.org.uk).

As part of its apology, Royal Mail announced that it would make a donation to charity to offset any extra revenue.

The apology stated: "Due to an error on our part, our new 2nd Class stamp price of 61p will be 1p above the existing regulatory price cap for a period of 7 days — from March 25 until April 1. We are donating the revenue that we expect to collect from the error — around £60,000 [about $79,000] — to the charity Action For Children, which helps disadvantaged children across the UK.

"We apologise for this mistake, and we are sorry for any inconvenience it may cause."

A pamphlet of Royal Mail’s rates for nonbusiness customers can be found online at https://www.royalmail.com/sites/default/files/royal-mail-our-prices-25-march-2019.pdf.