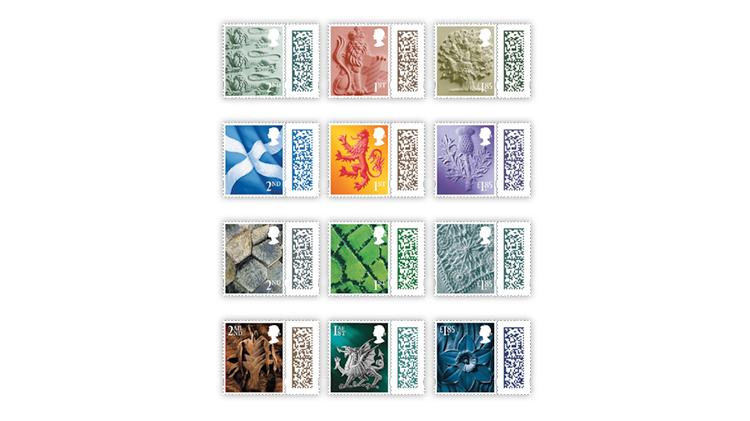 Each stamp has a barcode printed in the same color as the stamp and separated by a simulated perforation line. The barcode can be scanned with a smartphone. Royal Mail says that the barcode “technology signifies a major leap in service flexibility.”

Illustrated on the four £1.85 stamps are an oak tree (England), linen (Northern Ireland), thistle (Scotland) and a daffodil (Wales).

Definitive stamps without a barcode will be valid until Jan. 31, 2023, according to Royal Mail. While Britain’s Christmas stamps also will include barcodes, they will remain valid without barcodes as well.

Stamps without barcodes can be exchanged for the new stamps with barcodes through what Royal Mail calls its “Swap Out” scheme. More information on the scheme is available from Royal Mail.

Cartor Security Printers printed the new country definitive stamps by lithography in 12 different sheets of 25 (one sheet for each new stamp).

The stamps are self-adhesive. They are perforated 15 by 14.5 and measure 39 millimeters by 30mm each.

A presentation pack with all 12 stamps and more details about the designs is also available.

In addition to the stamps and presentation pack, Royal Mail offers a first-day cover for each country. The FDCs can be canceled with a Tallents House postmark or with postmarks from the capital city of each country: London, England; Belfast, Northern Ireland; Edinburgh, Scotland; and Cardiff, Wales.