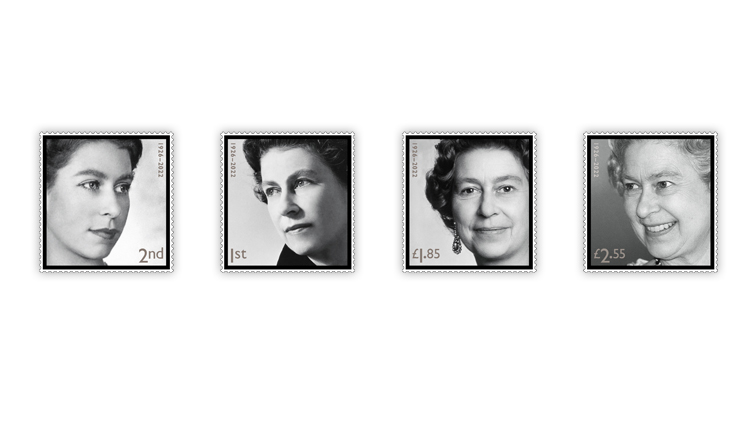 Great Britain’s Royal Mail will issue four stamps in memory of Queen Elizabeth II on Nov. 10. The stamps feature images previously used on four of the five 2002 Golden Jubilee stamps and are the first stamps approved by King Charles III.

As she did with every stamp issued during her reign, Queen Elizabeth II approved these stamp designs before they were originally issued in 2002. King Charles III approved the designs of this new issue, marking the first stamp issue approved by the new monarch.

Neither the queen’s name nor title appears on the stamps. They are simply inscribed with the years of her birth and death in the upper right on the second-class stamp and the upper left on the three other stamps. The service indicator or denomination is shown in the corner below the years.

Royal Mail notes that because each stamp bears the late queen’s image, the stamps do not need the silhouette of the queen normally required on special stamps.

The second-class stamp shows a photograph taken by Dorothy Wilding in 1952. In a press release, Royal Mail said that the queen posed for Wilding 59 times to mark her accession and coronation.

The image featured on the first-class stamp comes from a portrait taken by Cecil Beaton in 1968. Royal Mail called this image “stark, simple and direct,” and explained that Beaton wanted to try something different when he took this photograph for the National Portrait Gallery in London.

“There are no familiar regal trappings such as tiaras, jewels or lavish interiors,” Royal Mail said about the Beaton portrait, “but despite this simple approach, HM The Queen remains instantly recognisable.”

The stamp denominated £1.85 shows the queen in a photograph taken by Yousuf Karsh in 1984. According to the late photographer’s website, Karsh first photographed Princess Elizabeth in 1943. He went on to take official portraits of the queen and her family in 1951, 1966, 1984 and 1987.

Tim Graham took the photograph on the £2.55 stamp in 1996 when the queen attended Prague Castle during a visit to the Czech Republic. Graham traveled the world photographing the tours and state visits of the royal family, according to Graham’s website.

In 2021, Royal Mail issued a miniature sheet with four stamps featuring photographs of Prince Philip following his death on April 9 of that year. Those stamps also show black and white photographs presented in chronological order.

In addition to the Nov. 10 In Memoriam stamps, Royal Mail offers a presentation pack and a range of other collectible products.