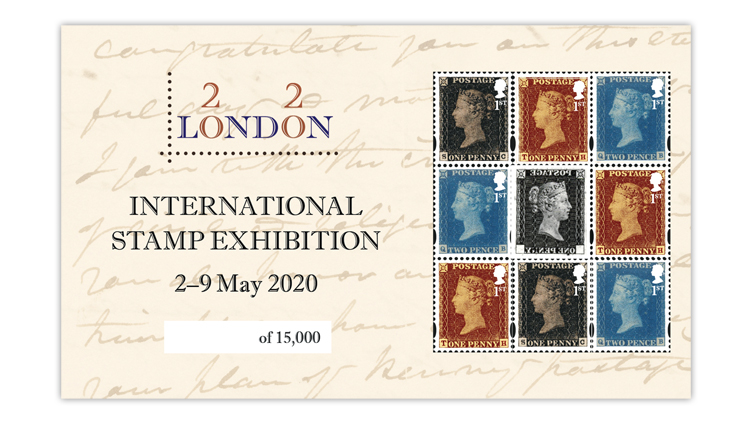 Royal Mail’s souvenir sheet for the London 2020 International Stamp Exhibition will include eight stamps (three designs) surrounding a central label. The new issues reuse designs previously shown on stamps issued in 2015 and 2016 to commemorate the 175th

In advance of the upcoming London 2020 International Stamp Exhibition, Great Britain’s Royal Mail has announced a selection of stamps in booklets and panes that will be issued to commemorate the show.

The international show is taking place May 2-9 at the Business Design Centre in Islington, London, England.

In a Jan. 21 news release, Royal Mail described its planned issues as “a selection of special items that recall the world’s first adhesive postage stamps, the Penny Black, Twopenny Blue and Penny Red.”

This year marks the 180th anniversary of the Penny Black.

These new stamps, to be issued in four different formats, reuse modified designs that previously appeared on 2015 and 2016 British stamps issued to celebrate the 175th anniversaries of those three classic British stamps from 1840 and 1841.

In addition, a sheet of 20 nondenominated first-class Hello stamps will be issued with adjoining labels that feature images of Mail Rail, described by Royal Mail as “the Post Office Underground Railway that can be experienced as part of the attractions at The Postal Museum in London.”

A retail booklet of six stamps containing two each of the classic stamp reproductions will be issued March 10.

The remaining four panes will be issued “for the exhibition,” according to the Jan. 21 announcement, but no specific issue dates were revealed.

All of the announced stamps are nondenominated first-class stamps for standard domestic letters weighing up to 100 grams (approximately 3.5 ounces). The current first-class rate is 70 pence (roughly 92¢).

The classic stamp designs featured on the new stamps faithfully reproduce the original designs of the 1840 Penny Black (Great Britain Scott 1), the 1840 Two-Penny Blue (2) and the 1841 Penny Red (3).

Those stamps each show a left-facing portrait of Queen Victoria, who reigned from 1837 to 1901.

Added in drop-out white to the upper right corner of each design are the left-facing profile silhouette of Queen Elizabeth II and the inscription “1st.”

Details of this issue were reported in the May 4, 2015, Linn’s Stamp News

The new issue for March 10, described as a retail stamp booklet, will contain two each of the three modified classic designs.

The booklet interior also includes the London 2020 logo plus six lines of print identifying the exhibition, its location, dates and website address.

A pane of 25 of the first-class Penny Black stamp will be issued for the exhibition.

Two souvenir sheets with the modified classic stamp designs will have limited printings. Both will feature two of the Penny Black stamps, and three each of the Two-Penny Blue and Penny Red designs.

The first, pictured here, shows the stamps surrounding “the old original die of Queen Victoria used in the production of the first stamps,” according to Royal Mail.

This sheet will be produced as a numbered edition of 15,000.

The second sheet will only be sold at the exhibition, Royal Mail advises. Celebrating the 150th anniversary of the first British postal card, the 1870 ½d violet, the souvenir sheet label reproduces the imprinted stamp design from that postal card, and the sheet includes relevant anniversary text.

That second souvenir sheet will be available in a numbered edition of 7,500.

With the exception of the postal card anniversary souvenir sheet, the exhibition issues will be sold by Royal Mail through its website.