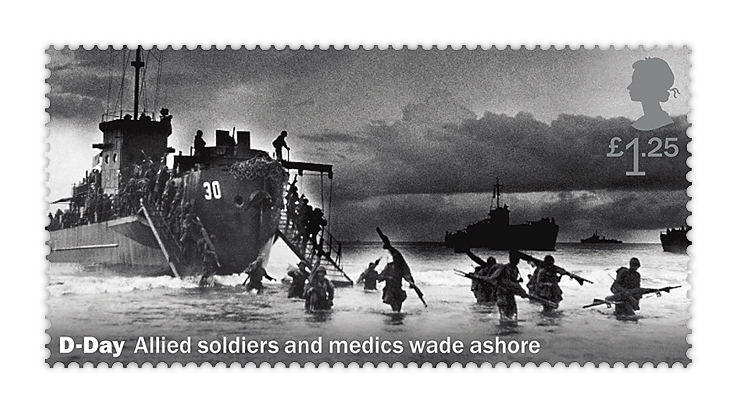 A planned stamp design revealed by Royal Mail Dec. 27 was quickly withdrawn when it was discovered that the military scene on the stamp commemorating D-Day was from an unrelated United States military landing. The stamps have not been printed, according t

On Dec. 27, Royal Mail announced plans for a set of 11 British stamps honoring the 75th anniversary D-Day in 2019.

Within hours it was determined that the photograph on one stamp in the set is unrelated to the June 6, 1944, Allied invasion of the beach at Normandy that the stamp intends to commemorate.

The preliminary design revealed for the £1.25 stamp is captioned “D-Day Allied soldiers and medics wade ashore,” but the black-and-white scene actually pictures the United States Coast Guard’s May 17, 1944, landing on the beach at Sarmi, Netherlands New Guinea (now Indonesia), nearly three weeks earlier and an entire continent away.

Royal Mail responded quickly when the mistake was uncovered.

“We work very hard to ensure that our Special Stamp programme appropriately commemorates anniversaries and events that are relevant to UK heritage and life,” a Royal Mail spokesperson told Linn’s Stamp News.

“We would like to offer our sincere apologies that our preview release for our 2019 Special Stamp programme included a stamp design which had been incorrectly associated with the D-Day landings.

“We can confirm that this image will not be part of the final set, which will be issued in June 2019.”

“I am sincerely sorry for this mistake and the hurt it has caused, in particular to veterans and those who lost loved ones,” Agar wrote.

“I would like to reassure them, our people and our customers that this stamp will not be part of our set to mark the 75th anniversary of the D-Day landings.

“We are asking veterans’ associations to share this message with their members. I hope to work with some of them to ensure the final stamps reflect the significance of the D-Day landings and the courage and sacrifice of those who took part.”

In response to a similar apology posted to Royal Mail’s Twitter account, some social media followers criticized the mistake, with one characterizing it as “Bit disrespectful to those who served.” Others shrugged off the design error with the comment, “Mistakes happen.”

The original Dec. 27 press release described the stamp program as celebrating the “Best of British” and stated, “The 75th anniversary of the D-Day Landings will be marked by a set of 11 Special Stamps. The stamp issue will be a timely commemoration of all those who participated and will use images from the day itself.”