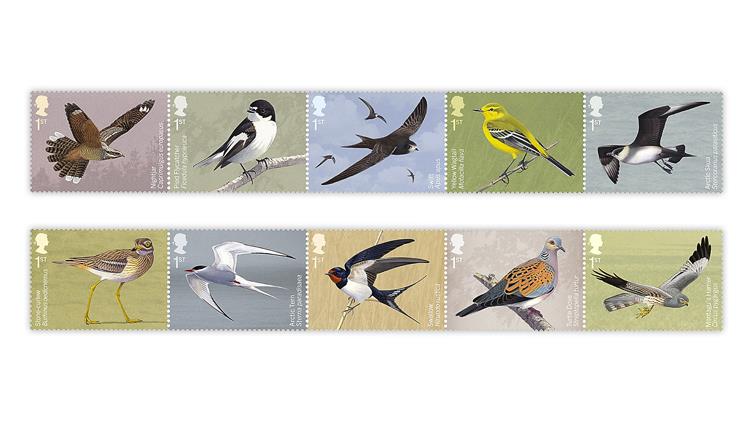 Royal Mail issued a set of 10 stamps April 7 highlighting the diversity of the migratory birds that visit the United Kingdom. The seasonal migration of birds through predefined routes from breeding to nonbreeding grounds has “fascinated and baffled naturalists for centuries,” according to David Gold, the external affairs and policy director at Royal Mail. 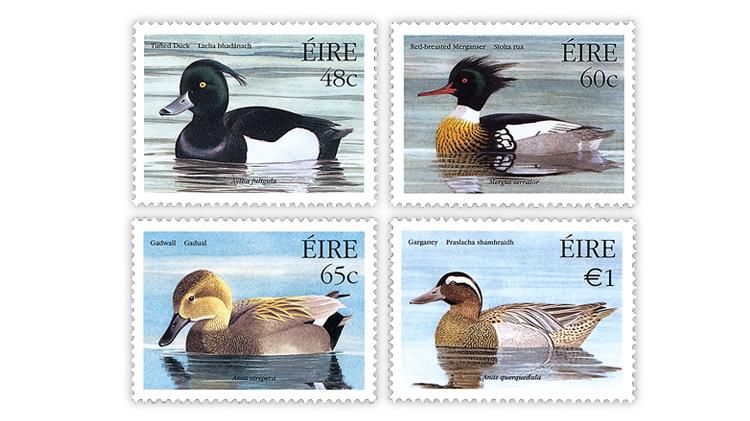 Irish ornithologist Killian Mullarney, one of Europe’s best-known bird artists, provided the illustrations for Great Britain’s new Migratory Birds stamps. Mullarney’s work has been featured in the Collins Bird Guide as well as on several stamps issued by Ireland, such as the 2004 Ducks set of four.
Previous
Next

All 10 stamps are nondenominated, valued at the first-class rate (currently 95 pence). The stamps are presented in two se-tenant (side-by-side) strips of five.

The nightjar, pied flycatcher, swift, yellow wagtail and Arctic skua are shown on one strip, and the stone curlew, Arctic tern, swallow, turtle dove and Montagu’s harrier on the other.

“The stamps showcase the diversity of migratory birds that arrive in the UK; from seabirds that migrate along the UK’s coastline, such as the Arctic Skua and Arctic Tern, to the exceptionally rare bird of prey, Montagu’s Harrier,” Royal Mail said in a press release.

Royal Mail defines bird migration as “the annual, seasonal movement of birds along predefined routes, known as flyways, between their breeding and non-breeding grounds.”

Each stamp presents an image of one or more birds in flight, perched or standing on the ground. The common and scientific names for the specific bird shown are given in either the right or left border of the stamp.

“The migratory journeys of the birds featured on these stamps are truly amazing,” said David Gold, the external affairs and policy director at Royal Mail. “Their annual travels have fascinated and baffled naturalists for centuries. It is only now that we are beginning to understand what drives and maintains this amazing, high-risk–high-reward behaviour. We hope that these stamps ignite a new interest in this remarkable phenomenon.”

Irish ornithologist Killian Mullarney created the illustrations for the stamps. One of Europe’s best-known bird artists, Mullarney has provided illustrations for several Irish stamps, including the 2004 set of four Duck stamps (Scott 1545-1548) and the 2019 issue of two Europa stamps (2226-2227). The Collins Bird Guide also has featured his work.

In its press release, Royal Mail provided information on the birds and their migration habits.

The stamps were designed by Hat-trick Design. International Security Printers printed them by lithography in sheets of 50 (also available in panes of 25). The stamps measure 41 millimeters by 30mm and have 14.5 by 14 perforations.

To read the complete story about the new Migratory Birds stamps, subscribe to Linn’s Stamp News.