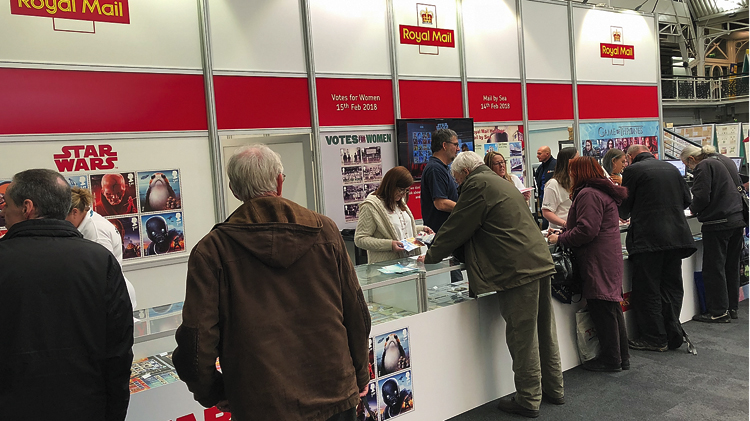 Great Britain’s Stampex show, held Feb. 14-18 in London, had just wrapped up when I wrote this column. One of the topics discussed on the show floor was Royal Mail’s stand (booth), which was dramatically different  from the stand of previous years.

So what changed? The size of the stand was smaller, but smarter in design. It showcased three recent stamp issues on panels in the backdrop: Star Wars, Votes for Women and Game of Thrones. The panels can easily be swapped out to promote future stamp issues.

Tony Devine, from Royal Mail’s Stamps and Collectibles team, detailed the changes in the February issue of the British Philatelic Bulletin.

He said: “All in all our new Stampex stand will be quite different for both our customers and those of us working on the stand.

Devine explained in the column that the full range of definitive stamps would be available, and they were from what I saw. Royal Mail also had an excellent stock of recent commemoratives at the stand.

While visitors to Stampex could purchase the prestige packet of the new Mail by Sea post & go labels, they couldn’t actually use a post & go machine at the Royal Mail stand. Devoted collectors of these labels were disappointed to say the least.

The machines were at the show, but were used for post & go labels of other postal administrations.

There are multiple ways to look at any of the changes that Royal Mail made to its stand, but I see a glimpse of Royal Mail reaching out to a new audience.

A new audience for philatelic products is admirable, and if Royal Mail is making the effort to control the cost of a stand so it can bring the story of stamps to different audiences I applaud that.

I say that with the hope that Royal Mail continues to remain true to the philatelic community by providing interesting stamp issues that debut at Stampex and throughout the year.

I wouldn’t want to see a slip in the amount of revenue brought in by Royal Mail at a stamp show contribute to an excuse for it to cut back further. Introducing popular new stamps at Stampex to keep the queues long has an impact.

I remember that the Royal Mail stand at the London 2015 Europhilex show (May 13-16) was busy each day with collectors clamoring for the new issues released at the show.