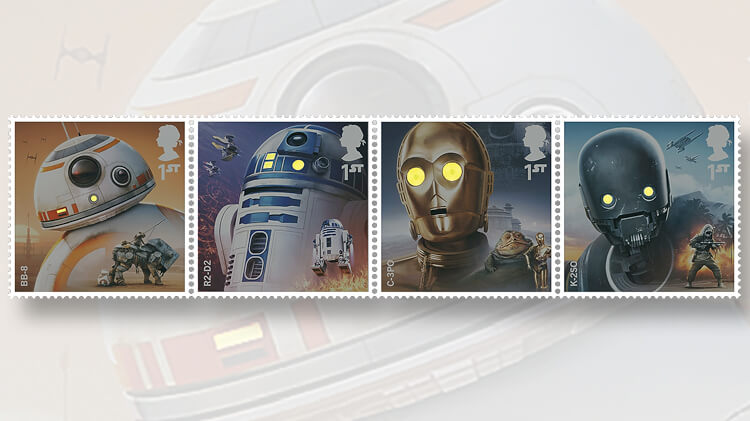 Great Britain's Royal Mail has announced that it is issuing three stamp booklets in conjunction with its second Star Wars set.

As reported in the Sept. 25 Linn's, 10 stamps showing aliens and droids will be issued Oct. 12 to commemorate the upcoming release of the film Star Wars: The Last Jedi.

One of the booklets will be issued on the same date as the stamps. The other two are slated for release on Dec. 14, the date Star Wars: The Last Jedi will open in Great Britain.

The current first-class rate is 65 pence.

The retail stamp booklet to be issued Dec. 14 is called “Droids” and includes the four Machin stamps plus the new BB-8 and R2-D2 stamps.

The third booklet is a prestige booklet called “Star Wars: The Making of the Droids, Aliens and Creatures.”

Royal Mail reports that this 26-page booklet will include all eight stamps from the new Star Wars set, four from the 2015 Star Wars set (Han Solo, Princess Leia, Rei, and Yoda), and a “unique pane of definitive stamps that can be found nowhere else.”

The booklet also has text about and illustrations of alien and droid characters and how they are created. There also are illustrations of original storyboards and rarely seen concept drawings.

Royal Mail has provided information about other products it will be issuing for the new Star Wars set, as well as details about the production of the stamps.

As is typical with most new British stamp issues, Royal Mail is offering first-day cancels, first-day covers, postcards reproducing the designs of the stamps, and a presentation pack with mint examples of the stamps, as well as images and information about Star Wars droids and aliens.

Some of the other products for the new Star Wars stamps are aimed more at Star Wars collectors than stamp collectors. These include what Royal Mail is calling “display sets,” two of which are shaped like droids when properly assembled.

The generic sheet has 10 stamps (the eight stamps from the 2017 Star Wars set with two each of the BB-8 and Supreme Leader Snoke designs) and 10 labels showing stills from the Lucasfilm archives.

As for the technical details for the 2017 issue, Interabang designed the stamps using illustrations by Malcolm Tween. International Security Printers printed the stamps by lithography in sheets of 48 (sold as panes of 24 at most postal outlets).

As reported in the aforementioned article in the Sept. 25 Linn’s, the droid stamps include features that will only be visible under ultraviolet light. As shown in the illustration on page 21, the droids’ eyes are highlighted.

The new Star Wars stamps can be pre-ordered from Royal Mail.